Today, LEAP Center students hiked up to Devil’s Bridge in Sedona, Arizona. With narrow spaces and lots of steep “steps”, the hike up was slightly more challenging than our previous hike, but we knew the payoff would be worth it. The trail was steep but offered shady spots that we took advantage of when we would stop to admire the red rock of the canyon (and catch our breaths). The narrow path was lined with prickly pear cacti, tall century plants and hikers sitting to get some water and rest for a moment. Once we made it to the top of the bridge, we knew all the climbing had been worth it. The views from Devil’s Bridge were breathtaking.

Just as we began feeling brave, we met a man who asked us to take a photo of him doing a handstand on top of the narrow bridge, putting us all to shame. 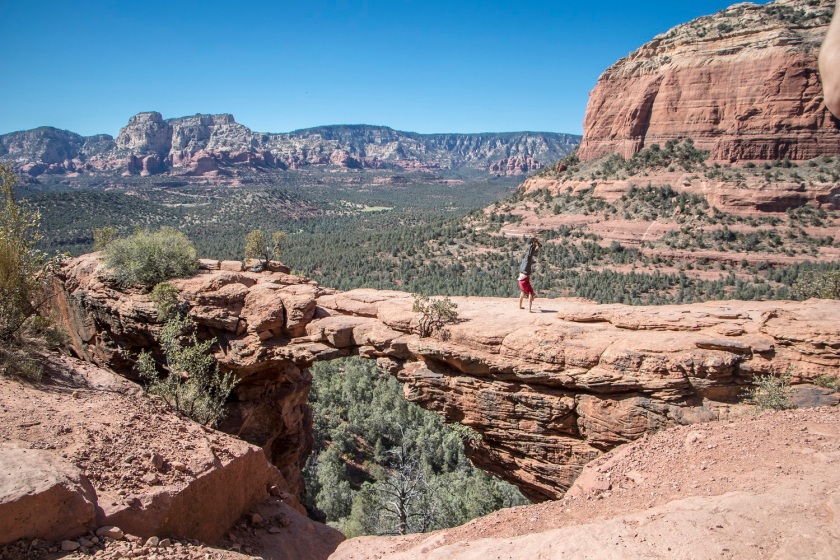 While on the bridge, we made a small cairn, which, according to Professor Yawn, officially made us hikers. 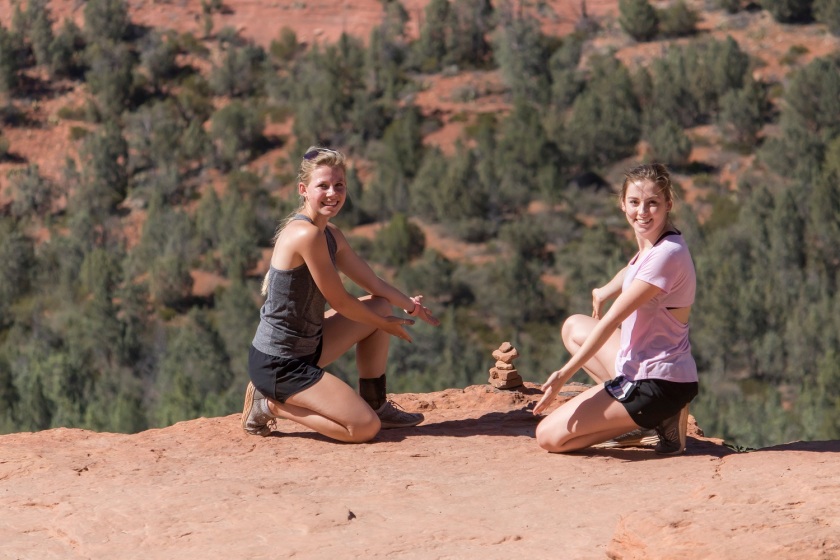 After admiring the views from Devil’s Bridge, we began the trek down, but not without a few pitstops. We went down and caught a quick glimpse of the bridge from below.

The trip down seemed much easier as we were all still so amazed at what we had just experienced.

After a quick bite to eat at The Wildflower Bread Company in Flagstaff, Arizona, the LEAP center explored the town square. The square on Friday evenings is vibrant with people shopping and eating at the unique food joints.

We visited a cool little bookstore where there was a live performance from a local band while the small crowd sang along to a song about mermaids.

After our group slowly made our way around the store reading the back of books and discussing ones we’ve read, we headed to a local favorite co-op art gallery and window shopped. Unfortunately, the gallery was closed, but we were still able to admire the beautiful works of art within. Next, we headed to a mystical store called Crystal Magic, where we all shared a few laughs about the shops interesting perspective. We continued our way around the square admiring local cuisine and the different types of people around each corner. Finally, we made our way through their local mall, which offered fashion of all types and a fun candy shop. I had never tried chocolate covered orange peels and surprisingly liked them! One thing I thought was interesting about Flagstaff was how active the square was on a Friday night, there were people everywhere! It really added to the fun and easy-going vibe of the town. I thought it was neat how all the restaurants were locally owned, each offering their own unique menu.  Flagstaff is a town I would enjoy visiting again and hopefully trying out a few of the favorite food joints.