Our week-long trip began with a flurry of motion. Loading up in Huntsville, we embarked on the winding nineteen-hour drive towards Madison, Wisconsin. From discussing the attractive qualities of smart phones to what attracts Sam Houston students to the activities Huntsville offers, we covered many topics along the way.

Stopping briefly in Jefferson, Texas to refuel, we took in the extravagant wood churches and red brick roads the small town boasts. Awed by wraparound porches and Victorian-style homes, we toured the town by car quickly enough to stay on track with our journey without missing much, and soon we were at the Arkansas border.

We also took the first of what would eventually be some 200,000 selfies.

We continued the drive through Texarkana and then on to Hope, Arkansas where we visited the childhood home of former President Bill Clinton.

Leaving all Hope behind, we meandered through Arkadelphia and Benton and on to Little Rock, Arkansas, where we stopped for dinner and some more sightseeing.

Priorities on food first, we strolled into Sonny Williams’ Steak Room, our bellies grumbling. We began our feast with a sausage and cheese platter that was mind-blowing – or so our starving stomachs thought. Trying three types of sausage (venison, pheasant, and rabbit), we were wowed by Chef Clay Sipes’ culinary skill and finesse. The beef tips and shrimp, coupled with not-so-ordinary garlic mashed potatoes and green beans, certainly hit the spot. Of all the food, the lamb chops with goat cheese may have been the best.

After indulging in dessert, we regrettably took leave of the memorable restaurant to explore all that we could in Little Rock.

Possibly, the best part of the entire day was the opportunity to allow our inner child to emerge while we explored the Riverwalk, played on different playgrounds, and walked through the sculpture garden. The brightly-lit bridges gave off a beautiful glow as we walked through the amphitheater and into the playground.

The pathways were landscaped and lined with trees and flowers. We guided ourselves through the History Pavilion and found a very welcome surprise on the other side: Peabody Park playground. With rope ladders, slides, and caves…

…it was, by far, one of the most interesting and fun parks we had ever been to.

While Peabody Park was fun, we didn’t stop our adventure there! On the path to the music park we came across the sculpture garden. The landscaping in the garden was beautiful, however, the real stars were the sculptures, lining the park and serving as centerpieces along the path. The sculptures ranged from women dancing to brilliantly-sculpted origami statues. As we walked through the garden to the music park, the sculptures became smaller and sparser until we reached our destination.

The music park was equally amazing. There were several large musical instruments – oversized bongos and xylophones – placed around the park that weren’t just art pieces – they could be played. We took turns creating various sounds, some beautiful, some not necessarily so.

Little Rock is famous for its Six Bridges over the Arkansas River that connect Little Rock to North Little Rock. After our playground and sculpture garden experience, we had the opportunity to visit two of the four pedestrian bridges on the Little Rock side.

First, we headed to the Junction Bridge, located in front of the River Market. At night, there’s a beautiful view over the Arkansas River, with the colorful bridge lights reflecting on the water.

Because we visited Little Rock on a breezy October night, our experience was peaceful and undisturbed, with no crowds. We encountered a few visitors along the way, some interesting characters, and some beautiful sights.

Our short stay in Little Rock was interesting and unique, and reflected the spirit of the LEAP Center.  And with that hopeful spirit, we headed on to Missouri deep into the night, awaiting the adventures of the next day in St. Louis. 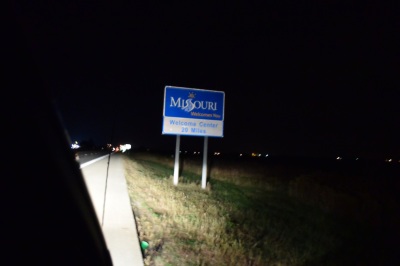