Lee Jamison has hosted an exhibit of his art in the LSC Art Gallery for at least the last three years.  And while the years and the exhibit theme may change, the art remains wonderful.

This year’s exhibit was titled “The Main Thing,” a nod to the Old Main Building that served as the University’s focal (but not geographic) centerpiece for almost 100 years, before burning in 1982.

In addition, the gallery featured some fifteen other pieces, several of which featured local landmarks: e.g., the Byrd Unit, Austin Hall, Cafe Texan.

The exhibit was up for two weeks, but the reception was last night, the penultimate day of the showing.  About 50 people attended the reception, and several prints of The Old Main painting were purchased, including Mr. Jamison’s first-ever sale to a student (thank you Jasmine Moss!).

Jamison’s work is shown at the William Reaves gallery in Houston, and can also be seen at various sites across Texas–the Driskill Hotel, the Darrell K. Royal Stadium, the River Oakls Country Club, the Mayborn Museum Complex at Baylor, and many other sites.  But the favorites around here tend to be the local sites, Old Main, Austin Hall, and the Wynne Home.

The LSC Art Gallery can be reserved by contacting Gayle Bullard at 294-1760. 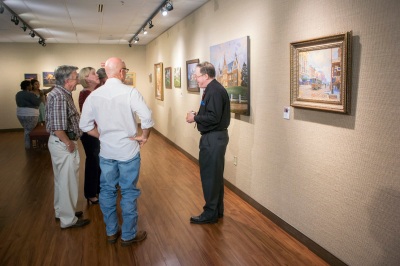