The story of the Princess in DC comes to a close, but not before embarking on new learning adventures.

Beginning with a tour of the Coastal Guard’s Headquarters, courtesy of Ademide, where she briefly discussed the history of the buildings and introduced me to several of her co-workers. Later that afternoon, I toured the Capitol, it was a privilege to see the Senate Gallery along with the old Supreme Court Chamber and the exhibition hall.

That evening, Ademide and I enjoyed delightful cupcakes from Georgetown Cupcakes and ended the day with a visit to the Marine Corps War Memorial.

Throughout the week, I attended a press club panel at the National Press Building hosted by the Rabaa Story Foundation in commemoration of the second anniversary of the Rabaa Massacre. There I had the opportunity to hear stories from a couple witnesses of the Massacre and learn about the conditions in Egypt since the tragic occurrence.

In the week, I had the privilege to assist Nancy with a speech for a UN official to be delivered to the President of Nigeria.

I also visited The Library of Congress where among other galleries…

I had the opportunity to see Thomas Jefferson’s collection of books and admire the breathtaking architecture of this building.

Afterwards I headed to the Supreme Court, where I was greeted by a statue of John Marshall as I walked in!

I had the opportunity to actually see the court! It was so exciting to be in this building.

Continuing the last two weeks of my stay in DC, I visited the National Archives.

This was an extraordinary experience where I was able to see The Constitution, The Bill of Rights, and the Declaration of Independence along with other very interesting documents that have created history!

After visiting the National Archives, I continued towards the Smithsonian Castle, but stopped at the National Sculpture Garden and the Butterfly Habitat Garden on the way.

Following the Hirshorn Museum, I met Ademide for dinner at Ted’s Bulletin.

We enjoyed breakfast for dinner at this lovely family restaurant, and had homemade pop-tarts for dessert. We said our goodbyes as she dropped me off at the Washington Monument where the adventure continued.

At the Washington Monument, I met with one of Ademide’s friends Ifa, who I had never met, and then I had two tickets to give away to go to the top of the Washington Monument. After asking a handful of people, I finally gave them away one of which decided to join us. So Ifa, Kevin, and I, three complete strangers at the time, ventured to the top of the Washington Monument together. Getting to know each other along the way and enjoying the stunning sight from the top as well as learning about the history of the building. But the adventure of the newly founded friends didn’t end there, we ended the night with some exploring of the city led by the two natives.

I also accompanied Nancy to give a presentation at the Leadership Institute regarding Fundraising and an all-day Fundraising Bootcamp which was a great learning experience for me. After a long day of fundraising, I had a delightful farewell dinner with Nancy at Bobby Van’s Steakhouse, and enjoyed a delicious dessert.

Continuing the week, I had the opportunity to reunite with camp friends that were in town for a couple of days and had dinner with them at Mehak an Indian restaurant in Chinatown which I loved, and will definitely be having again!

I also had the opportunity to visit the National Cathedral, which took 83 years to build! It was an impressive building.

Followed by a walk along the Chesapeake and Ohio Canal National Historical Park in Georgetown. 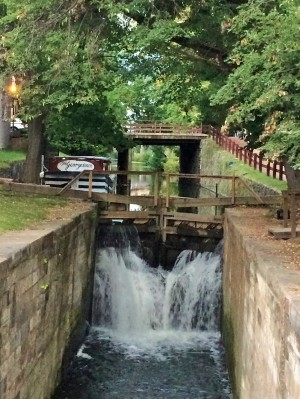 The adventure ended with a late night stroll through the National Mall reminiscing on the adventures of the last several weeks, and sitting in front of the reflecting pool facing the Washington Monument admiring it for quite some time. On this peaceful summer night, I felt incredibly grateful to be in this beautiful city.

One thought on “Goodbye Girl: Saying Farewell to DC”