Driven to learn more about the community, LEAP Ambassadors are participating in the heART of Huntsville program, which promotes local arts in the Huntsville area. The program consists of four meetings, each with a different artistic theme, tour guides, and participatory activities.

As Ambassadors, we were excited to once again learn more about our campus and community.  This excitement, however, was dampened–literally–when, just minutes before the program began, it began to rain heavily.  Ambassadors President Megan Chapa, in charge of driving one of the golf carts, arrived from across campus a bit worse for the wear.  Professor Yawn, also driving a cart, arrived with one leg completely drenched.  It occurred to us that the program’s participants would probably find the campus’s art much more appealing if they weren’t having to stand in the rain to view it.  Fortunately, the rain calmed eventually and we all managed to arrive at the Art Department to kick off our first meeting with staff, locals, and faculty, albeit a bit belated and somewhat damp. 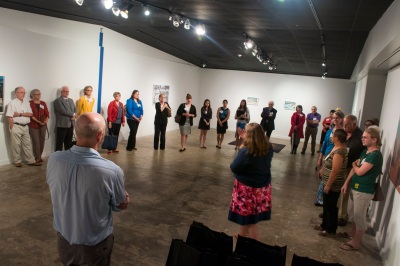 At that time, Dr. Melissa L. Mednicov introduced us to the “Still Summer” exhibit, with work by Debra Barrera and Kelly O’Connor, and gave us a closer insight at the background of the exhibit.

While O’Connor’s work emphasizes memory, fantasy, and fiction; Barrera’s work emphasizes personal memories, specifically relating to her childhood participation  in sports such as swimming, seen in most of the art in the exhibit, such as “Pool Rules” or “Bottom of the Pool”. Another piece of work we found fun and interesting was “Selfies on Mars/Selfies on Earth”, where we of course could not miss our group selfie with Mrs. Woodward, Mrs. Pease, and Dean Shields. 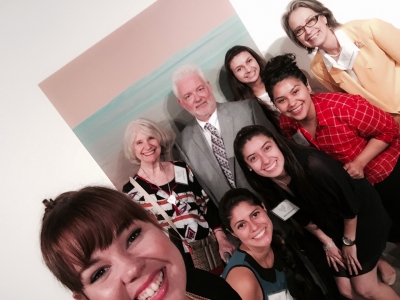 Before heading out to the Lowman Student Center Art Gallery, we all took a survey to test our knowledge of Huntsville community art so far. By the end of the program we should be able to see an improvement in knowing and recognizing artwork locally. Next, we arrived at the LSC Art Gallery where we enjoyed an exhibit offered by Professor Trish Ramsay, whose Family and Consumer Science class produced scarves and other textiles.  The pieces were beautiful and creative.

As a bonus, we learned a bit about the large piece of art outside the LSC art gallery.  Turns out, it is a piece by James Surls, who graduated from SHSU.  The piece, unlike almost any of his other work, was done when he was a student at SHSU in the 1960s.

Following the scarves exhibit, we moved to the Gaertner Performing Arts Center where we enjoyed a walking art tour. Craig Brossman, the Facilities Manager of the GPAC, gave us a tour of the Concert Hall, Dance Theater, and Recital Hall. Turns out, an acoustician (!) was hired to design the rooms in such a manner as to make the sound optimal, while also providing state-of-the-art technology. This tour was filled with interesting information (Recital Hall fits 790 people!) and provided rich information about a building that was named among the twenty-five most impressive University Art Centers in the United States.

Professor Henderson was also on hand to discuss many of the pieces of art, such as the “Around the Flower Wall” by James Surls, the previously mentioned internationally known sculptor and a former undergraduate SHSU student; 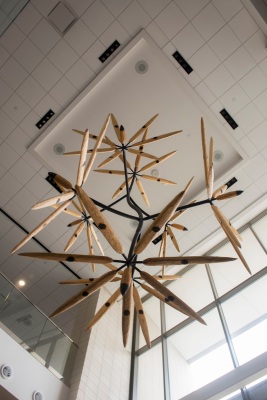 “Diamond Waves Column” by Jesus Moroles, an internationally known granite sculptor whose work the LEAP Ambassadors have had the pleasure to see in Fayetteville, Houston, New Orleans, Norman, Austin, and Birmingham; “Firedance” by Jason Lawson;

and various pieces by Stanley Lea.

To end our educational evening, we had dinner at Austin hall, the oldest educational building in continuous use west of the Mississippi and the most notable landmark on campus. We are so thankful to Dean Shields and the College of Mass Communication and Fine Arts for sponsoring such a wonderful evening. We left stuffed with food and knowledge, eagerly awaiting the coming weeks of fun and surprises. Next week we will focus our attention on the outdoor art of Huntsville, Texas and the artwork of David Adickes.