We fueled up on a hearty breakfast before making our way down into the Windy City for day three of our whirlwind trip. We got an honest look at the Chicago way of driving – which seemed to be like a life-or-death situation. Between the locals’ blaring horns and ignoring driving lanes, we were pleasantly surprised to make it to a parking garage in one place.

Our first big goal for the day was to check out Millennium Park. Like its name hints, Millennium Park was planned and subsequently built to celebrate the beginning of a new millennium. Ironically enough, it was not completed until four years later, in 2004. Sitting atop a parking garage and commuter rail station, this park also is considered to be the world’s largest rooftop garden.

Although the biggest attraction at Millennium is the Jay Pritzker Pavilion, home to many performing arts events, we hurriedly passed it in pursuit of the notorious, locally-nicknamed Chicago “Bean.”

The three-story sculpture is aptly named Cloud Gate and was designed by Anish Kapoor. Interestingly, it was also incomplete when Millennium Park was unveiled and subsequently was kept covered until it was finished in 2006. The “Bean” provided multiple picture-taking opportunities in its reflective, steel, seamless shape. We happily indulged our “selfie” guilty pleasure, much to Professor Yawn’s chagrin. 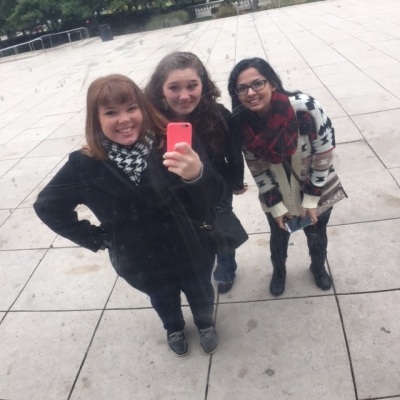 Heading out of Millennium Park in search of our next stop, we came upon Crown Fountain. Confused by the faces on these fifty-foot tall towers, we did not know what to make of such public art. Upon further research, we found that fountains located in the subject’s mouths spray water on unsuspecting passersby, May through October. Although contentions were raised originally over the height of the art pieces completed by Jaume Plensa, they have been accepted by the city and display almost 1,000 Chicagoan’s faces every year.

We left the fun and information Millennium Park for our next destination: a Chicago Architecture Foundation Boat Tour. The weather proved to be a barrier, it was a brisk 47 degrees and windy on the top of the boat. However, the tour guide made the cold bearable with her vast knowledge of Chicago architecture.

We started the tour by viewing different types of buildings in various architectural styles. We saw several different styles of architecture such as Neoclassic, Modern and Post-modern.

However, we found one of the most interesting to be the Beaux-Arts style. Prominent from 1880-1920, and considered neoclassical architecture, the Beaux-Arts style has several prominent characteristics that set it apart from other architectural styles such as flat roofs, rusticated and raised first floors, arched windows and doors, and a magnitude of themed sculptures, artwork and murals.

The tour really allowed us to learn about different styles of architecture by seeing the buildings firsthand while listening to the stories behind the buildings and their architects. We traveled to a point from which we could see almost the entire skyline of Chicago. The view was unlike anything we had ever seen! Looking at the skyline really made us realize just how large Chicago is and how much work went into designing the buildings that make Chicago the great city it is.

We next headed to the Art Institute of Chicago. To remain on topic with Chicago’s architecture we learned about on the boat tour, the first exhibition we visited at the Institute was on Architecture and Design. There were numerous architectural fragments belonging to several famous architects, such as Frank Lloyd Wright and Adler & Sullivan. One favorite piece, hanging from the ceiling, was Frank Lloyd Wright’s Triptych Window, a window panel composed of clear and colored glass, featuring a number of vertical and horizontal lines interspersed with circles and half circles, resembling balloons, and even an American flag shape.

The Impressionism Collection was a hit as well. Impressionism is a style that captures scenes from everyday life, especially outdoors, just like a picture would do. Caillebotte’s “Paris Street; Rainy Day,” was enough of a favorite to inspire one of us to purchase a miniature.

The oil painting is fairly large and features a typical rainy day in 19th century Paris, with a number of individuals walking the streets of Paris holding umbrellas. The focal point is a couple in the foreground, holding arms and sharing one umbrella. It depicted a scene relatable to today.

Another favorite was Georgia O’Keefe’s “Cow’s Skull with Calico Roses,” in the American Collection.

The painting features a cow’s skull on a white background with two Calico roses, one on the upper right side of the skull and the other directly under the chin. The story behind the painting captured our attention. As the narration indicated, O’Keefe drew inspiration from carcasses of animals that had suffered through a drought in the 1930s Southwest. She was fascinated by them, and said, “To me they are as beautiful as anything I know… The bones seem to cut sharply to the center of something that is keenly alive on the desert even tho’ it is vast and empty and untouchable.”

Just before closing, we admired the Modern Art Collection, featuring works of Picasso, Dali, and Matisse. A favorite was Picasso’s “The Old Guitarist,” from his Blue Period of the early 20th century. The painting is mostly blue in color, except for the brown guitar, but it is also blue in the sense that it reflects sadness and misery, although we managed a smile for the painting.

One additional highlight should be included.  While we were touring the galleries, we came upon a woman with an easel.  Turns out, she is a student at the Art Institute, and her assignment was to copy a painting of her choice.  The assignment’s purpose is to help the student to better learn the style of painting.  In this case, the student was learning a traditional style, and she was kind enough to go over with us how she was completing her painting.  Her mini-lesson just added to the educational experience!

Our experience at the Art Institute was unforgettable. The pieces of art we admired were true masterpieces, and the stories behind them were very interesting. 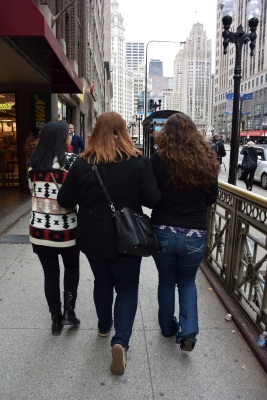