We started the day by attending the 2014 Film and History Conference! We attended two panels each lasting an hour and thirty minutes. 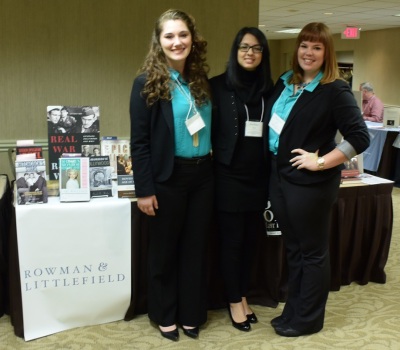 The most interesting one that we attended, however, was about classical Hollywood film musicals of the 1930’s and 1940’s. During this panel, two separate professors, Brent Phillips and Gail Sheehan spoke about their research on the topic. Gail Sheehan spoke about voice dubbing in films during the 1930’s as well as gender and race in the American musicals during that time period. Gale focused on two films in particular: “Gold Diggers of 1933” and “Professional Sweetheart.”

Gail Sheehan spoke about voice dubbing in the film, “Gold Diggers of 1933.” In the film, Joan Blondell is the female lead and has several musical numbers throughout the movie. Mrs. Sheehan showed several scenes from the movie in which it appeared that Blondell was singing, however, the voice was actually Etta Moten’s voice. Voice dubbing was a common practice during that time period because it was often difficult to find a woman that fit the necessary physical appearance of character as well as superb singing capabilities to accompany the looks.

Sheehan also spoke about gender roles in the film, “Professional Sweetheart.” The title of the film changed several times throughout the filming process with the final product resulting in a controversial title because the woman goes against convention and the title insinuates prostitution. The video is a satire about radio personalities during the 1930’s. The main character is played by Ginger Rogers and her name is Glory, a radio personality. Her African-American maid, Vera, played by Theresa Harris, is constantly by her side and living in her shadow. However, when Glory decides to quit the radio, Vera gets her chance to shine. In the end, Glory takes her job back and steps on Vera in order to achieve her reinstatement. This film really portrayed how African American women were treated during that time period especially because Theresa Harris was never credited for her role in the film.

The last presentation of the panel was about Charles Walters’s career by Brent Phillips. Charles Walters lived an extraordinary life and was both a movie director and a dance director. Charles Walters did not like to be called a choreographer because he felt that in order to orchestrate a successful number, you had to have the right angles and cater the dance number to the actor/actress’s abilities.  He composed several numbers throughout his career with notable actors and actresses of that time such as Grace Kelley, Debbie Reynolds, Lucille Ball and Judy Garland. The first dance number that he created occurred in the movie, “Let’s Face It.” While he loved to create dance numbers for films, he had a burning desire to do more; a desire to direct the films himself.

Charles Walters began directing films in 1947 and was able to insert his own dance numbers into the movies. Charles Walters also directed several films and he had a unique directing style. Walters absolutely could NOT direct from the chair. He would often insert himself in both male and female roles and play each of them the way he had envisioned in his mind. This allowed the actors and actresses a better understand of what he was looking for as a director. His skills behind the camera and on the dance floor really set him apart from other directors in the industry and made him truly memorable.

After the conference, we took a meandering drive through the Wisconsin countryside in pursuit of the home of the famous architect, Frank Lloyd Wright. After a mere forty-five minute drive, we pulled up at the visitor’s center for the home of one of the most influential American architecture prodigies. Surrounded by farmland and the Jones-Wright valley, we took a van up a scenic drive to the home on the side of the hill. We pass a crisp water garden and tumbling waterfall along the way, providing the imagery for Wright’s thoughts that falling water is the music of architecture.

Finally up the steep driveway, we made our way towards what we think is the front door, as Wright is known for hiding the entrances to his homes. Guided by his subtle hints in architecture, we came to the see the rest of the valley on the left and the front of the home on the right. Our sweet tour guide, Kate, did an impeccable job of clearly indicating the signs of Wright’s style as we made our way up the steep stone steps and into the architect’s office. Interestingly enough, this was the home that served as a classroom, as well, to the Fellows Wright brought in to instruct. This was seen through the many places utilized for drawing and creating along the walls and the many windows available to bring in the natural light of the countryside. Wright is known for utilizing every space, but also making it strikingly beautiful or unique in the same right.

We sat with Kate in front of the fireplace, just as Wright did with many of his Fellows, and reflected on the many things that could have happened in this room. From drawing to measuring and building windows, learning under Frank Lloyd Wright would never leave a moment dull.

Awed by his eye for detail and strange geometric shapes, we moved from his office building and back outside to view the garden. The lush green grass and harsh stone rock provided the perfect contrast for the eye to digest, although it was easy to see that the view would be even more picturesque in the spring. We finally were able to enter the home and make our way down a tight passageway, which highlighted Wright’s use of compression. From this tight passageway, we opened the door to enter a large open room (“The Great Room”), exemplifying the expansion technique Wright demonstrated in his other structures.

The Great Room is a large living room, used by Wright for parties and social gatherings. Three walls of the room are glass, allowing for an amazing view of the countryside surrounding the property and of the water gardens below. Almost every furniture piece in the room has more than one use to it. In fact, along the glass wall, are lines of flat couches, divided by wide wooden armrests. The wooden armrests are movable and can be used for various purposes, such as a small table for two people. Next to the fireplace, on the left side of the Great Room, sits a couch that serves also as a bed, and as a desk or table, because its armrest is fairly large and can be used for various purposes.

Wright liked to use Taliesin as an experiment in architecture, and he frequently modified it and added to it. Interestingly, when he was 88 years old, a famous magazine wanted to come and take pictures of the property and, despite his advanced age, Wright designed an entirely new room, with glass on three sides. Because the room is exposed to the harsh winter elements, the preservation staff periodically moves out the valuable pieces of art and furniture of the room and stores it in a safer place until spring. The room is located and designed to not only admire the countryside from it, but also the entire house. In fact, a long hallway that is the entrance to the room, also holds the entrance to the Great Room, and on the sides, entrances to the guest room, and all the other rooms of the house.

It was interesting to visit Taliesin. Kate was an excellent, knowledgeable, and amicable tour guide. Thanks to the tour we gained a better understanding of Wright’s point of view on how to admire and interpret his architecture. He knew very well what he wanted to achieve with his work and how he wanted people to see it and admire it.