The LEAP Center has had many opportunities to travel, volunteer in the community, and attend events showcasing world leaders from across the globe. This past week, though, the advisory board had the chance to share the LEAP Center’s mission and accomplishments with the Walker County Republican Women at their monthly meeting. Although the LEAP Center is non-partisan, we were so fortunate to be invited by the WCRW President (Madilene Loosier) and Vice President (Terry Stivers) to present the goings on of our organization, and we look forward to the opportunity to make similar presentations around the community.

Attending the meeting and presenting were two completely different accomplishments for the LEAP advisory board. In order to be prepared, we started working about a month and a half out. It proved a great researching opportunity as we had the chance to look back and learn about the Junior Fellows and the legacy we strive to continue. Old blogs, pictures, and even scrapbooks gave us plenty of information to create a well-thought out and organized presentation. Once we had the research finalized, we moved on to practicing our speaking skills. We met multiple times to work on delivery and succinctly relaying our message as a Center focused on cultural programs, travels, internships, and volunteer work.

After much research and practice, the day of the meeting arrived and along with it, a few nerves. Although we were a bit anxious about speaking to a large group, the Walker County Republican Women welcomed us with such hospitality that those nerves were quickly quieted. President Loosier and Vice-President Terry Stivers made sure we were taken care of and introduced us to the women, making us feel comfortable. 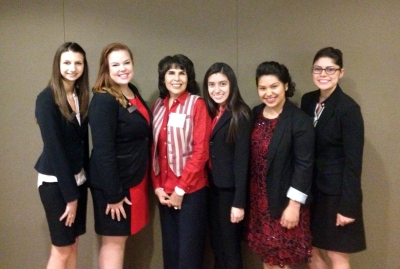 We had the chance to mingle with various members of the community and even talk to SREC District 5 Representative Nita Davidson, and Senator Schwertner’s District Representative, Hayden Paul.

Finally, after a few unexpected technological challenges, we began our twenty-minute presentation on the LEAP Program and all that it entails. Nerves aside, we became impassioned by our goal to represent the LEAP Center appropriately and eloquently described the mission to enrich academic education through volunteerism, internships, travel, and cultural programs. Finishing up, we had the chance to answer some great questions from those in attendance as well.

It was an eye-opening experience to be able to present to leaders in the political spectrum of Walker County and see what skills are needed to prepare a speech, as we have seen so often in the past. Following our mission to enrich academic education, we were able to learn something valuable outside of the classroom and gain life experience while doing it. We would like to thank President Loosier, Vice-President Stivers, WCRP Chair Linda McKenzie and all of the Walker County Republican Women who welcomed us so graciously and are such wonderful examples of women in politics today.

The LEAP Center is non-partisan, consisting of members of Republicans, Democrats, and Independents.