To commemorate the 10th Anniversary of the Junior Fellows and LEAP, alumni, current LEAP ambassadors, and community members joined efforts to surprise the founder of the JF/LEAP, Professor Mike Yawn. Stephanie Fors organized, communicated with alumni, and planned the big event along with help of the LEAP Ambassadors.

On the day of the party, the weather proved to be problematic. Rain poured as guests arrived from all around. JF and LEAP alumni from Houston, Austin, and Waco drove through the treacherous weather to attend the reunion. In addition, community members and university staff arrived amidst the storm. The reunion and mingling began just in time for Professor Yawn’s arrival. The guests huddled together in an effort to keep the element of surprise until the very last moment! As Professor Yawn entered, the shock on his face was evident when he saw many familiar faces of students from the past…

…and of community members whom have helped the JF/LEAP grow throughout the years.

After everyone was welcomed by our MC, Austin Campbell, it was time to enjoy dinner. Professor Yawn’s favorites were on the menu including brisket, coleslaw, baked beans, and macaroni and cheese. The reminiscing immediately began as JF alumni swapped experiences with the current LEAP ambassadors…

…and expanded on how being a JF helped them grow and shape their careers.

Some of the guests had special gifts and awards for Professor Yawn. Megan Chapa, current LEAP President, presented Professor Yawn with a scrapbook that complied letters, memories, and heartfelt thoughts from guests on the impact JF/LEAP has had on their lives. Karla Rosales, current LEAP Ambassador, presented an Amazon gift card from the LEAP ambassadors. Blake Roach presented a flag that was flown at the Texas State Capitol. Kaitlyn Tyra, LEAP Ambassador, presented a giant check with donations from alumni and community members for the LEAP Center. On behalf of Congressman Brady, Ariel Traub presented a commendation in Professor Yawn’s honor. Mayor Woodward read his last proclamation as the current Mayor of Huntsville declaring December 11th, 2015 as Mike Yawn Day in Huntsville. 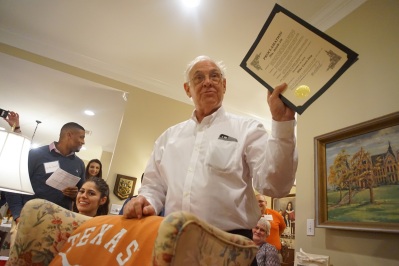 Each gesture was thoughtful and made the evening more special for Professor Yawn.

The opportunity for alumni, community members, and current LEAP ambassadors to come together was a great way to show our appreciation for Professor Yawn. Many thanks to the Woodwards for opening up their home and for all their help with the surprise! 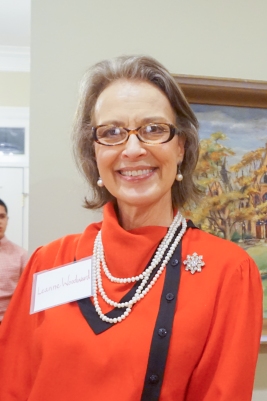 Thank you to Stephanie for organizing such a wonderful party, and to the alumni and community members for their participation in the surprise. Lastly, thank you to Professor Yawn for ten exciting years of learning and growth. We can’t wait to see what the next ten years hold!

Editor’s Note: What a wonderful evening!  Thank you for all the great work and support you’ve put into the organization.