Often, we hear politicians talk about revolutions that must start on the grassroots level, but most of us either do not know what that means, think its political jargon, or we wonder if it means the people holding signs and handing out pamphlets in front of the voting office door. To find out the meaning of grassroots for ourselves, we (Alex, Megan, Austin, Brittany, Bella, Casey, Jessica, Christina, Alex, Jasmine, and Bryan) took part in various election-day roles.

On March 1st, one of the biggest elections days nationwide with eleven states holding their primaries, I rushed from my class in Huntsville all the way to Conroe, where I was stationed outside Greystone Hills Community polling center, a neighborhood along I-45.  Surprisingly, I soon found out that there are rules to what exactly can be handed out to voters and the very important rule that there has to be a 200 ft. arc around the door that we had to stay out of while speaking with potential voters.  Within the first hour, I learned the ritual I was to adhere to in order to successfully distribute our message.

The strategy was a friendly smile, a good-natured tone, a confident voice, and the ability to anticipate both welcoming and not-so friendly reactions from the voters. We quickly learned that when it comes to politics, people will show their true emotions. Essentially, this meant getting accustomed to hearing “no” and other negative feedback when approaching voters with pamphlets, or voter guides, about certain candidates. For Austin Campbell, he claimed that the hardest “no” he received came from a senior citizen lady who decided to let him know how she not only did not like the candidate whose pamphlet he was trying to give to her, but also how she strongly did not approve of the parking situation. Austin said it was one of the hardest tongue-lashings he had ever received, including his years as a football player. However in my experience this negativity of some voters did not deter me from continuing my task with the positive energy that I had started the morning with.

“In all, I was glad I volunteered on primary election day. I had the opportunity to participate in yet another part of our political process.  I admired the will of every day citizens to spend time from their busy schedules to exercise one of the most valuable rights of our democratic nation .” –Austin Campbell

We’d like to thank the many campaigns, workers and candidates that gave us advice, training, and this opportunity.

For Megan Chapa and Bella Abril, it was also a long and exciting day, albeit one that unfolded in a different location. They were both election clerks at the Walker County Annex. They were not just thrown to work on Election Day; the two attended trainings leading up to their electoral duties.

The polls opened at 7 a.m. and closed at 7 p.m. so they committed half a day to serving Walker County. Their duties included checking people in, handing out ballots, securing the voting grounds, redirecting folks who were at the wrong voting poll, and working with the election judge at the end of the night to count and turn in votes.

Following her long day, Chapa summarized her experiences, “Election day was really hectic! We ran out of ballots halfway through and we had to help our election judge get new ballots for the voters.  But it was a great experience, and even as Political Science majors, we learned so much.  It is a hands-on democratic workshop.”

As the thirteen-hour day came to an end, the LEAP Ambssador team decided to reflect on their day at an Election Day party with the other Ambassadors, Professor Mike Yawn and Former Mayor Woodward and Mrs. Woodward. As the local and state level election results from early voting were gradually released, we passed time by sharing our experiences of working at the polls. For Alex, Austin, and I, we shared our continuous rushing from voter to voter that left our feet sore and blistered. As for Megan, she shared her experience as a poll worker and the range of voters whom she had to assist. Even though some of the ambassadors were unable to participate in this political process, they got to witness the toll of this tiresome day in our weary expressions and captivating anecdotes.  Soon we knew who had won the various Walker County government positions that were up for election and Ted Cruz’s victory in Texas.

The ambassadors felt really good about the work they did, and the role that they played in the political process. Although the day was long, it was an amazing experience to see what exactly grassroots politics was all about and how it could impact communities.

This point was driven home repeatedly  in our experiences, but perhaps most impactfully by the election returns.  One candidate in Walker County made a runoff by only two votes, reminding us of the importance of campaign get out the vote efforts and of accurate, professional poll workers.

With waving hands and warm smiles, LEAP ambassadors Brian Aldaco and Kaityln Tyra paraded the streets of Conroe, TX alongside Congressman Brady this past Saturday in the Go Texan 51st annual parade. Presented by the Houston Live Stock and Rodeo Show, the parade was a great way to demonstrate our pride of being a Texan. Positioned behind the float of Miss Moo (the quirky mascot of the Ladies Go Texan Committee) and in front of the Lake Conroe Chamber of Commerce float, we walked through downtown Conroe holding banners and signs recognizing our current US Representative. Showcased in the parade were Conroe High School’s marching band, the Oak Ridge High School Air Force Junior ROTC, the whimsical Arabia Shrine cars, and other local community organizations. 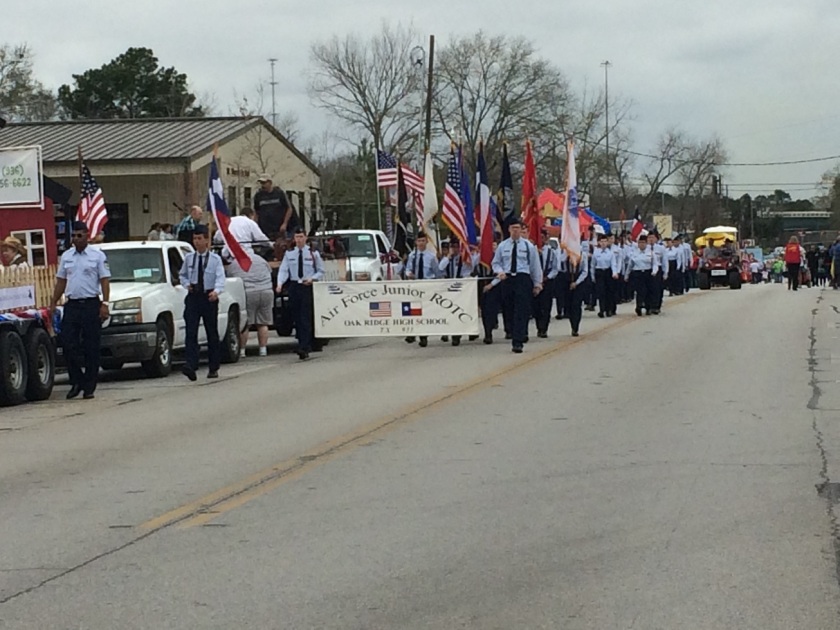 We were among the only ones walking in the procession, and I will shamefully admit that at times we would hold up the rest of the motorcade. These moments of slight embarrassment, however, were all worth it when having in the parade and seeing children who are always happy at a parade. For at least in this blogger’s opinion, nothing matches the feeling of being part of town’s festive, patriotic spirit.

In this fashion of civic pride, we paraded around the Montgomery County Courthouse,, eventually turned to stand by the county’s Commissioner’s Court, and met the parade’s judging panel in front of Conroe Tower. While crossing this street it would have been nearly impossible for any participant to avert one’s gaze away from the distinctive Montgomery County logo, above West Davis Street. 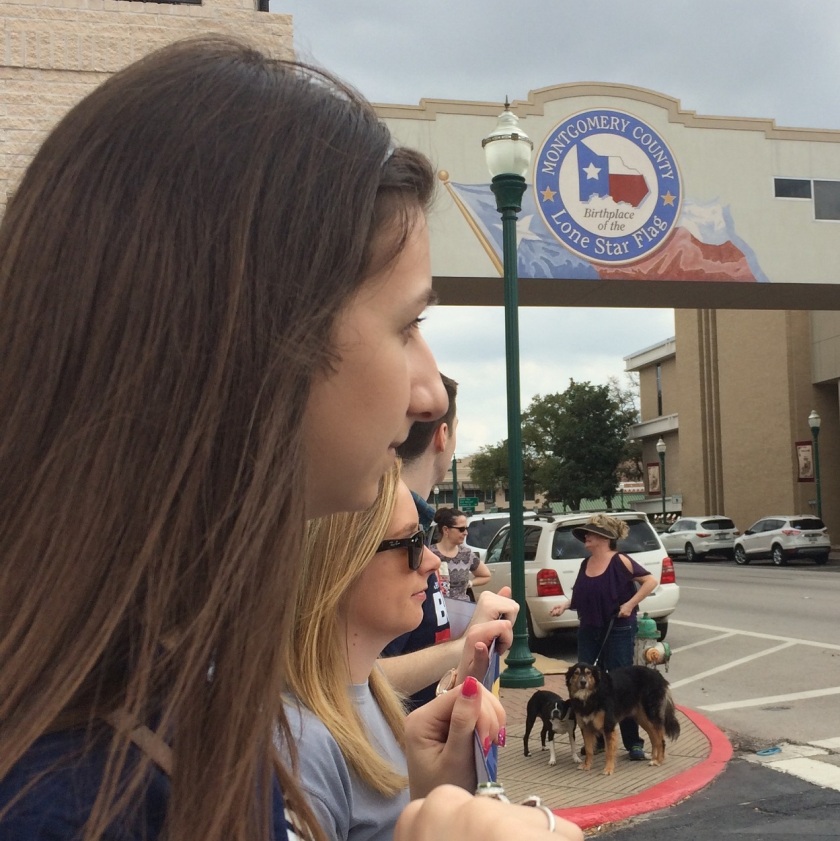 This depiction, made up of the county’s outline decorated with the state’s flag and the line “Birthplace of the Lone Star Flag,” properly captured the spirit of the event. As spectators and participants of the parade, we all gathered on a Saturday evening to celebrate being a Texan and, in my own case, a member of Montgomery County. In assembling, all of us showed how proud we were of our Montgomery County heritage and our love for our Lone Star State. 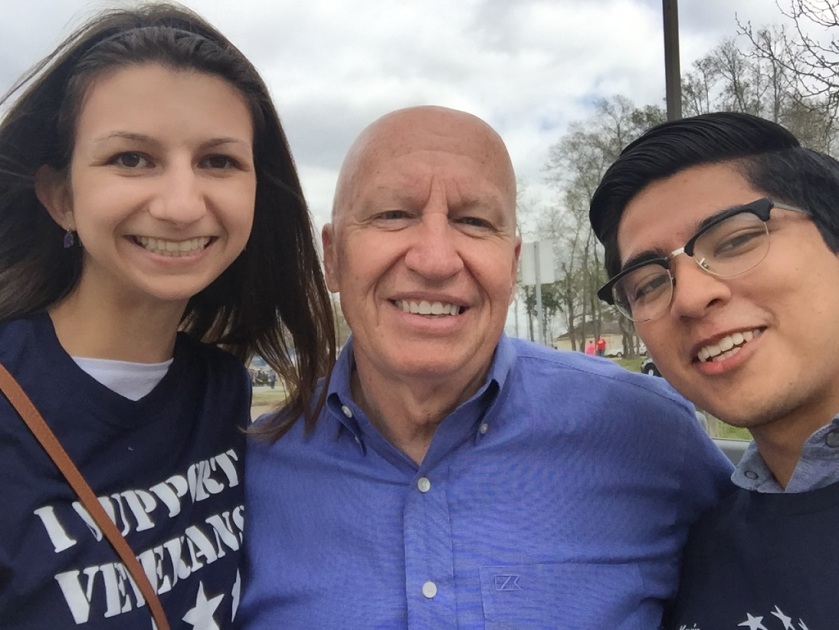 The LEAP Center is a non-partisan group of students who are engaged in their communities.