The LEAP Ambassadors, with an interdisciplinary approach and broad horizons, have always had a soft spot for the College of Humanities and Social Sciences.  Similarly, we work often with various non-profit, business, and government leaders in the Huntsville community.  So it was a special treat this past Friday to enjoy the 9th Wall of Honor Ceremony with people from both worlds.

Taking place in the recently renovated Lowman Student Center’s new ballroom, it was the first time many of the students and alumni had seen the new-and-improved venue. Tables and centerpieces were neatly set amongst processions of chatting friends and colleagues. 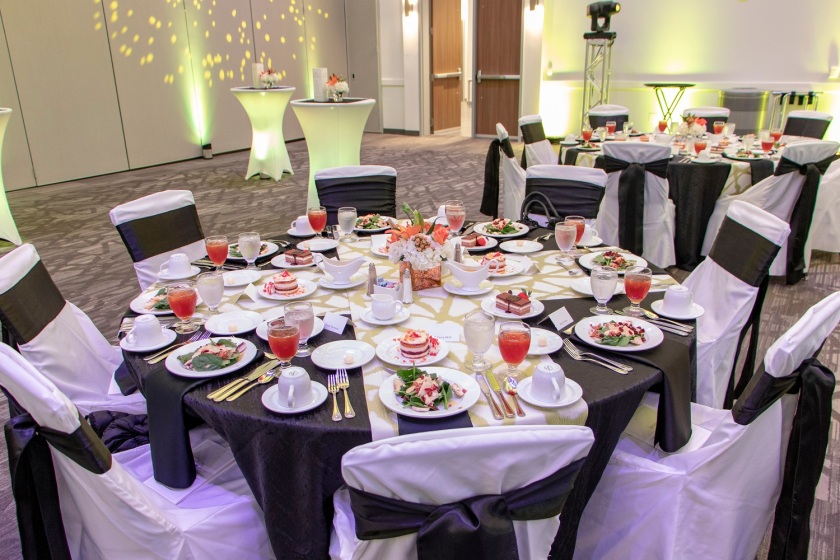 On the stage sat SHSU’s own jazz band playing soft tones that added to the ambiance.

We were fortunate enough to be invited by Mac and Leanne Woodward.  While Ms. Woodward couldn’t make it, we sat with Mr. Woodward and enjoyed the evening.

Since we arrived before the actual ceremony began, we had time to say hello to some of the friends of LEAP such as Ralph and Linda Pease; Chris Tritico, and Dr. Sanford. As much as we loved catching up with these people, it was not long before we were ushered to our seats to begin dinner. Before we ate, Dr. Abbey Zink, Dean of CHSS, gave opening remarks about what it means to be awarded a place on the Wall of Honor. She said that the people who are awarded are those who serve the community and truly demonstrate Sam Houston’s motto of “the measure of a life is its service.”

After these prefatory remarks, dinner was served to each table with plates stacked high with bourbon-braised short ribs, truffle whipped potatoes, and sautéed zucchini and squash. Through conversing with our table mates, which included Terry and Paula Thibodeaux, as well as Steve and Brenda McNeely, we learned that all of us, save Mr. Woodward, are or were first generation students. Likewise, all of us at the table study or studied political science. After a wonderful meal, Dean Zink took the stage once again to begin the honoring ceremony.

This year, the college honored three excellent alumni and faculty: Paula Lenz (alumnus), Dr. Rowland Miller (faculty), and the late Dr. Paul Ruffin (faculty). Dick Eglsaer, provost of the university, introduced each recipient and showed a short video which included testimonies from colleagues and other faculty explaining what makes the honoree worthy of a place on the Wall of Honor. All three were excellent nominees. 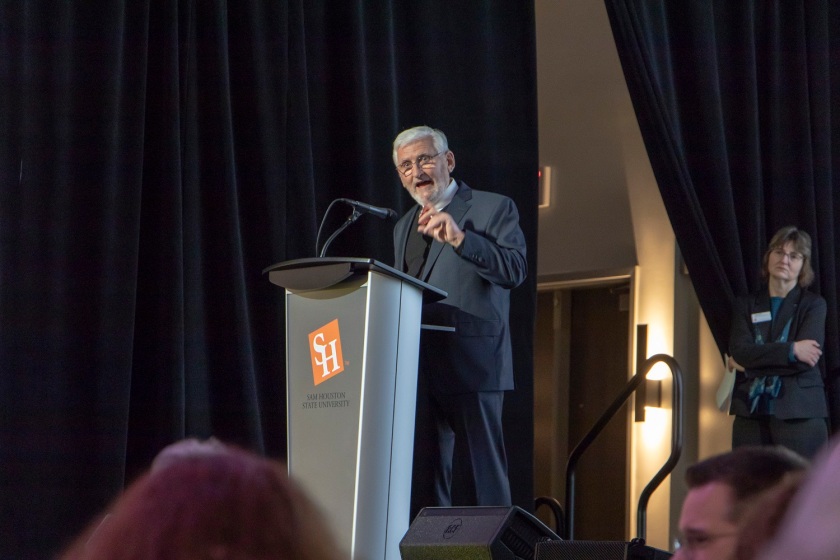 Paula Lenz is a Bearkat alum with a successful career in the fields of education, public relations, and community development. She retired after serving 14 years as the executive director of the North Houston Association (NHA). Prior to joining the NHA, she worked for several years as a national manager and vice president for Woodward-Clyde Consultants Inc., a large engineering and design company. After graduating from Sam Houston with a B.A. in English, she continued to be involved with her university by serving a two-year term as chair of the CHSS Advisory Board. 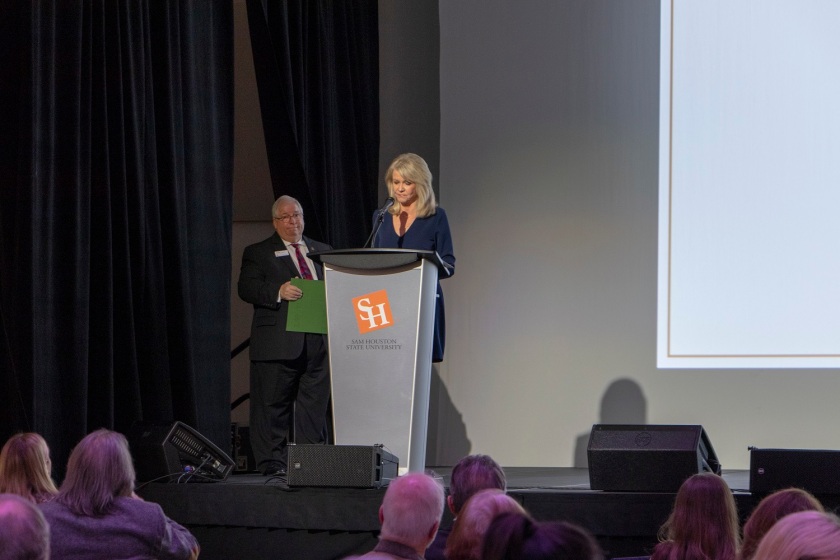 Ms. Lenz has also aided students by creating internship opportunities. Upon taking the stage, she spoke of her experiences as a student and how, at the time, she never would have thought that she’d become a member on the Wall of Honor. She concluded by giving words of advice to current students: “Keep working hard because, who knows, maybe in thirty to forty years you could be up here receiving this award.”

Dr. Rowland Miller was honored next. He received his B.A. of Psychology from Cornell University and his master’s and doctorate in Philosophy in Social Psychology from the University of Florida and in the 1970s, he became a professor in Psychology at Sam Houston State University. He is credited with making great strides in the psychology program at SHSU since, during his tenure, he fought hard to create the doctoral program that is currently so successful.

After watching the video about him which included colleagues and previous students boasting about his charm and fortitude, Dr. Miller literally leaped onto the stage to receive his award. His passionate speech consisted of acknowledging all students and faculty, past and present, who have worked hard to improve the university.

The last recipient of the night was the late Dr. Paul Ruffin. He was the 2009 Texas State Poet Laureate and an English professor at Sam. He was featured on National Public Radio, Voice of America, and many other renowned national talk shows. The video that was made to commemorate his gifts to the community showed family members, work friends, and colleagues reveling in their fond memories with Dr. Ruffin. When his name was announced, his daughter and son accepted the award and spoke on his behalf.  His daughter reminisced on the times when she had her father to guide her and his son conveyed equally heartfelt words.  After their emotional homage to their father, the room erupted in applause.

Dessert did not last long and soon Dean Zink was on the stage again thanking everyone for coming and congratulating the recipients. After saying some goodbyes, we made our way out of the Orange Ballroom, a little tired from having down a third event in as many nights, but thankful to Mac and Leanne Woodward and invigorated with the spirit of possibilities and opportunities.

Thanks to Mac and Leanne Woodward for the opportunity to attend; congratulations to Ms. Lenz, Dr. Miller, and Dr. Ruffin; and to Deanna Briones and the CHSS Staff, who put on a great event.