The LEAP Center brought in Dr. Carl Rollyson and Pulitzer Prize winner Glenn Frankel this week to speak with classes, provide mentorship to students on research and writing, and to host a film festival for the University and the community.

But first, they were guest lecturers for Dr. Grant Weidenfeld’s film class, offered through the MCOM department.  Rollyson and Frankel discussed two films about which they are experts: Rio Bravo and High Noon.  Rollyson has written a biography on Walter Brennan (star of Rio Bravo) and Glenn Frankel recently wrote “High Noon: The Hollywood Blacklist and the Making of An American Classic”.

They showed the first ten minutes of each film, discussed the narrative aspects of film-making, and took questions from the audience.  Most of the questions came from LEAP Ambassadors who sat in on the presentation, but some of the students from the class also asked excellent questions… 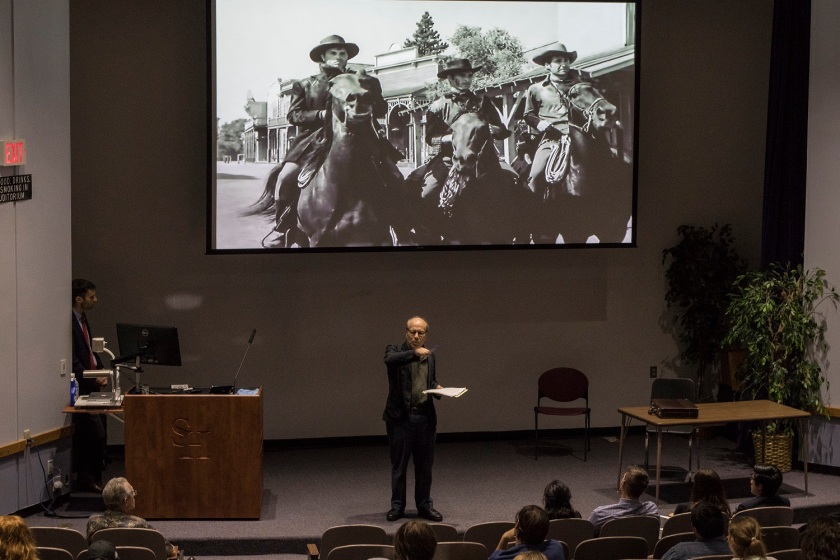 …which elicited excellent responses from the guest speakers and earned the students free copies of Mr. Frankel’s best-selling book.

The LEAP ambassadors headed to Pizza Shack in Willis for Dinner.  It’s a great place for Italian basics, and we enjoyed fried ravioli, bread, spinach dip, and pizza.  Dr. Rollyson shared stories with us about the draft and Vietnam (which tied in nicely with last week’s guest speaker, James Reston), his many biographical subjects, and Glenn Frankel discussed his new book, while also sharing stories about his first job at the Washington Post–where he was hired by Ben Bradlee!

It was a great way to start our very eventful week!

For lunch, we decided to take Dr. Rollyson and Mr. Frankel to one of Huntsville’s main food attractions, the local restaurant, Farmhouse Cafe. The LEAP Ambassadors, Professor Yawn, Assistant Professor of Mass Communication Dr. Grant Weidenfeld, and our guests sat down for a pleasant lunch and conversation.

The waiter delivered their famously scrumptious broccoli cornbread, which Ambassador Makayla encouraged our guests to try, but only Dr. Rollyson braved the cornbread. Apparently, he really enjoyed it, as he ate two more pieces! The conversation began over a few appetizers, fried green tomatoes and pickles, at the request of Mr. Frankel, because as he expressed, he does not get to savor these Southern favorites often up north (but he wouldn’t eat the broccoli cornbread…)

As we bonded over lunch, the conversation centered around films, actors and actresses, and the LEAP Ambassadors themselves. Everyone had different perspectives and backgrounds that made the conversation interesting and allowed all attendees to partake in the dialog. Mr. Frankel was very interested in knowing more about who we are, the different presentations we’ve given in our community, our community engagement, and how a student becomes an ambassador. The ambassadors proudly answered all his questions! 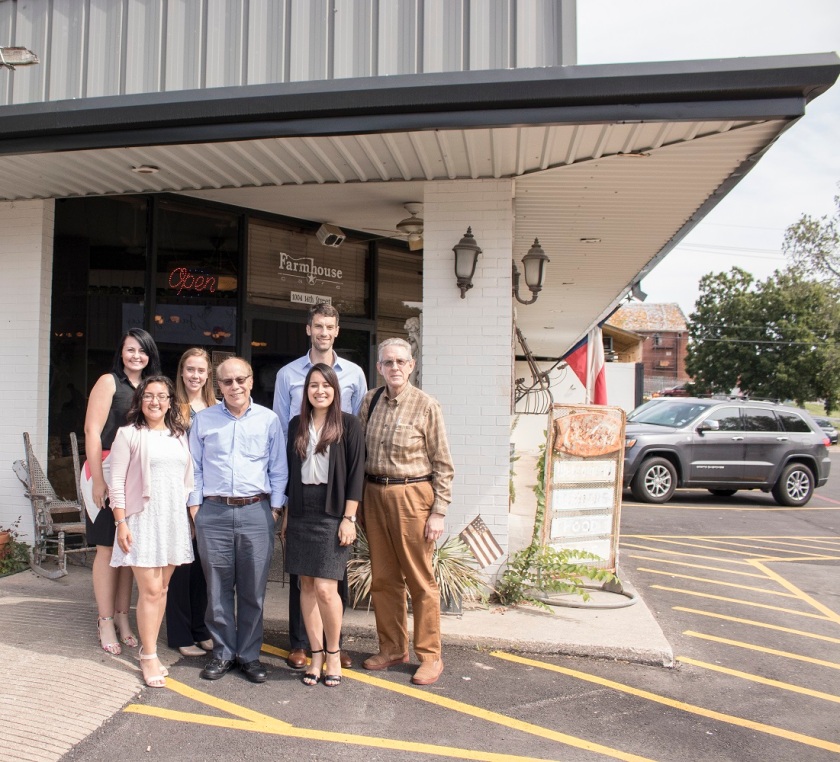 As we left Farm House Cafe, we told Dr. Rollyson and Mr. Frankel that we could not wait to see them at tonight’s heART of Huntsville and that they were in for a treat!

In Dr. Carl Rollyson’s sixth visit to Huntsville, the LEAP Center welcomed him to our Texas town with a screening of Rio Bravo. The film was not only appropriate for the throng of John Wayne fans in town, but also for Dr. Rollyson, whose most recent biographies addressed one of Wayne’s frequent co-stars: Walter Brennan.  Accordingly, this past Friday the LEAP Ambassadors open the doors to the Kathy E. Don Education Center…

…to make room for the Wayne/Brennan admirers (along with a few newbies to the western flicks) for a night of corrupt land owners, noble peacemakers, and the beloved Stumpy.

Before the show, however, the western wearing guests clanked their boots around the center to mingle and enjoy of our delicious punch and popcorn. 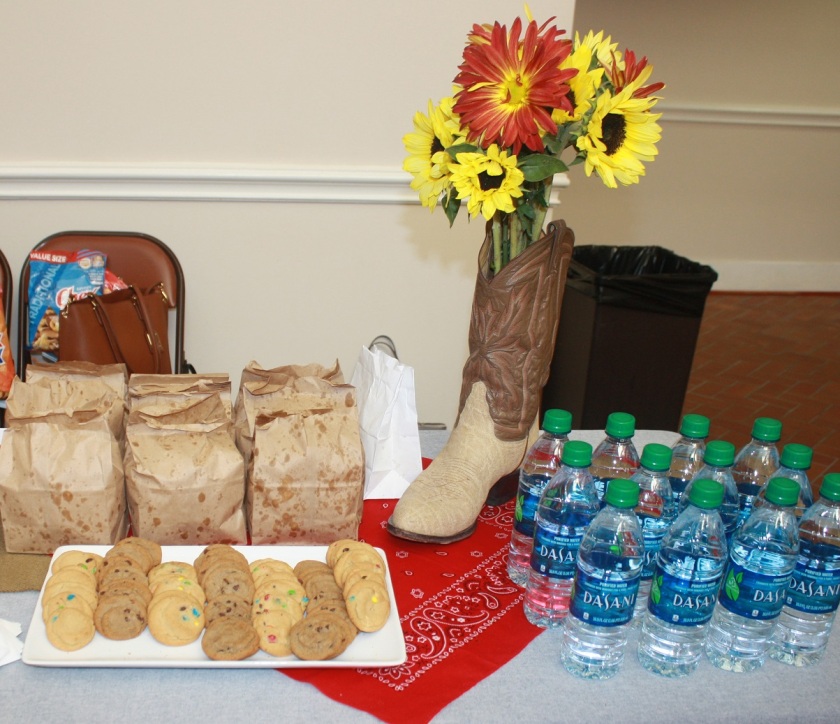 It was nice to visit with many friends who attended the screening of the Howard Hawks’ classic.

Judge Tracy Sorensen brought her son, Cody, and he had seen the film some 15 times.  Indeed, he knew much of the film’s plot, and was heard to complain that “John Wayne didn’t make enough movies”.

Other audience members, including many LEAP Ambassadors, took the time to pose next to our John Wayne cutout.

Before the screen opened up to the vastness of the West, however, Dr. Rollyson gave us an overview of some of those characters who made up this endless country.

Dr. Rollyson even acted out a couple of parts…

in his enjoyable and informative introduction to the film.

Before long, Rio Bravo began, and the audience sat still for a hundred and forty minutes of enjoyment. Among the audience we could feel the empathy towards Dude’s (Dean Martin) alcoholic struggle…

…coupled with the amusement towards the numerous comic remarks by Stumpy (Walter Brennan).  Interestingly, one of the well-liked characters was Pedro Gonzales-Gonzales, who was both loyal and maddening to Sheriff Chance (Wayne’s character) but, of course, it was Wayne who was the star of the show.

Regardless, no matter how young or how old, whether this was the 50th or first time to watch, everyone who left, left with a smile in their face and a craving for more of the Duke, more of the Western thrill, and more of Brennan.

Fortunately, this latter wish came true for those who left the screening with a copy of A Real American Character: The Life of Walter Brennan, signed by its author Dr. Carl Rollyson.

The LEAP Center was glad that everyone left happy from the screening and couldn’t miss an opportunity to take a group picture with two Texas heroes: John Wayne and Sam Houston.

The LEAP Center would like to thank Dr. Carl Rollyson for his friendship, expertise, and fine analysis of films and diverse biographical subjects!