Their advice was to the point and useful. Karissa Morrissey provded a helpful overview of the LSAT and GRE, offering a timeline for preparing for graduate school or law school. High points included:

Dean Stephen Perez stressed the importance of the LSAT Scores and a student’s GPA, while pointing to Tech’s strong rates on bar passage, employment, and the excellent performance of students in Moot Court and Mock Trials.  Also, the National Jurist magazine ranked Tech among the top 10 in the country in both “overall value” and “student satisfaction.” Perhaps not surprisingly, more SHSU students are enrolling in Tech, with four Bearkats matriculating last year.  Dean Perez seems to be intent on duplicating that success this year, offering the students who attended the seminar fee waivers to apply to Texas Tech.

Thomas Leeper’s discussion bridged both law and public affairs.  Leeper has served as an attorney in private practice, a city attorney, and a political appointee.  Leeper discussed life in law school (giving particular attention to the Socratic Method), the kind of work that attorneys do, and the importance of public service.

The Center for Law, Engagement, And Politics (LEAP) promotes learning opportunities across diverse disciplines at SHSU.  Over the past seven years, SHSU has significantly increased its efforts in the pre-law field, doubling the number of students accepted to law schools in the United States.  Moreover, last year, SHSU moved in the top five percent nationally in the Law School Admissions Council’s (LSAC) ranking of “Law School Feeders.” 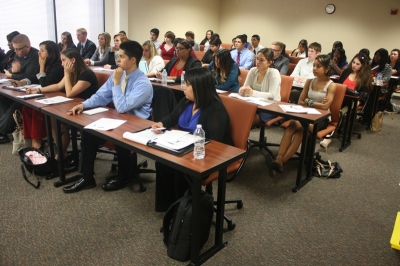