By Constance Gabel and Karla Rosales

The LEAP Center recently partnered with the Wynne Home Arts Center to host an Easter Egg Hunt for the entire Huntsville Community. More than 150 citizens from the surrounding area came out for an early Easter celebration on Saturday. Families enjoyed an afternoon full of activities and gorgeous weather. The event featured an egg hunt of more than 800 candy-and-prize filled eggs, coloring, face painting, games, and hot dogs grilled by master chef, Professor Mike Yawn himself. Sammy the Bearkat and the Easter Bunny added to the fun and the Easter spirit by entertaining the crowd with a competitive egg toss.

We started the afternoon with crafty activities for the children. Volunteers from the university’s own Art Department came to help with the festivities by heading up the face-painting booth. Children walked away with butterflies, bunny noses, beautiful hearts, and many other fun creations painted on their cheeks. 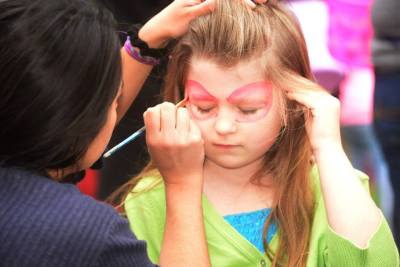 Seeing the joy radiate from inside the kids amplified the good-looking art on their faces, while some children were not quite as happy to have sticky goo spread on their skin. Beside the face painting booth was a coloring station where children had the option to draw their own springtime masterpiece with crayons and craft paper.

Following the event, we had a huge canvas full of colorful flowers, bright Easter eggs, and even some well-drawn bunny rabbits as proof of the kids’ creativity.

While waiting for the hunt to commence, kids and adults alike watched as Sammy the Bearkat challenged the Easter Bunny to an egg-toss duel. 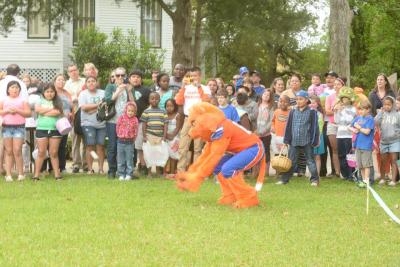 Armed with her spirit and spring in her step, the Easter Bunny fought with tosses that could have shocked even the best egg tosser in the business but in the end succumbed to Sammy the Bearkat’s finesse and mighty egg-tossing skills. Although not a winner by the sight of the shattered eggshells and runny yoke on the ground, the Easter Bunny played the loser well and shook hands with Sammy for a game well played, and remained in good spirits as children flocked to her.

Finally, after much anticipation, children of different ages lined up with their baskets and at noon, the Easter egg hunt was off!

Racing to find the golden and silver eggs, the children sped around the back lawn in search of the little oval shaped, plastic goodies. Grabbing and going, they searched and searched until finally, even after much preparation on behalf of LEAP and the Wynne Home, all of the eggs were found. The kids who found the special golden or silver eggs also had the ability to take a chance look at the prize table for an extra goodie to go along with the candy and Smoothie King gift card found in the egg, thanks to the generous donation from Ms. Scott at Smoothie King (1328 Sam Houston Ave!).

Following the egg hunt, the kids and their parents got in line to enjoy a much deserved lunch of hot dogs, chips, some Mayflower Easter cookies and even an ice-cold soda to quench their thirst. 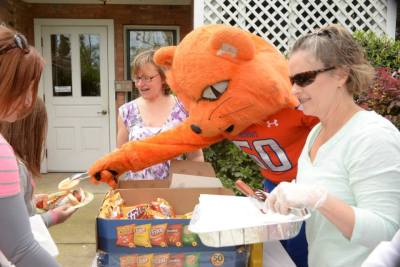 Ending the afternoon right, the willing got to take a picture with the Easter Bunny.

Whether contemplating the perfect pose or continuing with the egg relay games, families stuck around to enjoy the beautiful weather and spring fever floating through the air.

Special thanks to the Friends of the Wynne, the Art Department, and Laura Scott from Smoothie King for their generous help–not to mention super volunteers such as Bella Abril, Margaret Gulledge, Michelle Hebert, Terry Stivers and Ryan Brim.