With the primary around the corner, the LEAP Ambassadors had the opportunity to attend a candidate forum hosted by the Walker County Republican Party Thursday evening.

Most of us attended to watch and learn more about the candidates who wish to represent us at the local and state level, but one of our ambassadors had an extra special role. Austin Campbell was chosen to be the moderator for the event. Even though he was nervous leading up to the event, Austin was appreciative of the experience and glad he had been asked to moderate the forum. At the end of the night Austin  thoroughly enjoyed the experience and was glad to be part of the political process.

Another of our Ambassadors, Megan Chapa, took a small part in the proceedings by leading the pledge.

With an enthusiastic moderator, a grateful pledge-leader, and a full crowd… 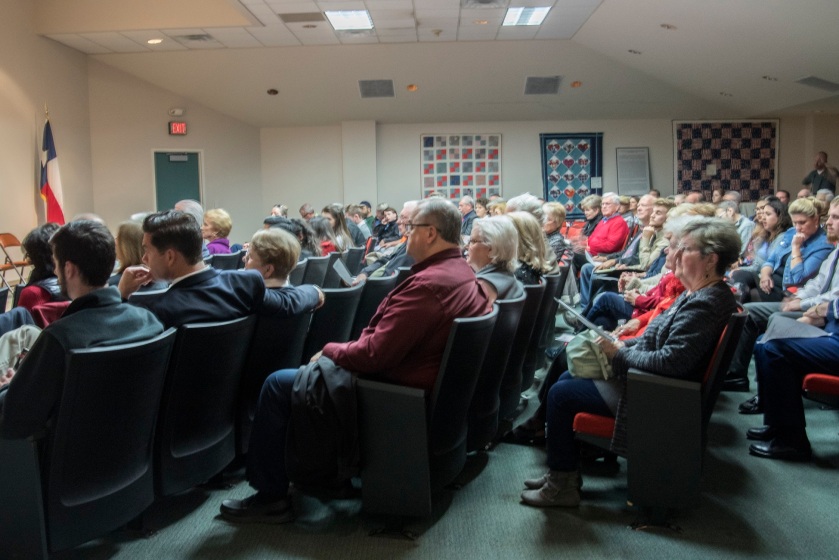 …the forum soon got down to business. The candidates were asked two questions and given 90 seconds to answer each question. The questions addressed their experience, contributions, and goals for the position they hope to hold.. We listened to candidates from contested races such as United States Representative, District 8; State Representative, District 18; County Commissioner Precincts 1, 2, and 3; Constable Precinct 2; and County Chairman. After each candidate answered both questions, they were given 60 seconds to give a closing statement.

The candidates came from different backgrounds and had different qualifications, but they all are hopeful to be able to change the community for the better. The forum was very interesting to watch, not only because we were getting well informed, but it was also interesting to see the differences between those running for local positions, and those running for state positions.

Not all of those who represent us, or wish to represent us were under pressure that night. There were also some officials present from the non contested races such as the Sheriff, Tax Assessor-Collector, and the Constables from Precinct 3 and 4. Without any of the pressure of running against an opponent, these officials were able to let us know what they have done for our community and their future goals. All of the LEAP Ambassadors enjoyed spending the evening with the candidates at the forum and thought that it was a great way to become more educated when going to the polls, and a great opportunity for us to learn more about our community.