If it’s spring, it’s time for the 10th Court of Appeals to hear four cases at Sam Houston State University.  This year’s cases proved remarkably diverse, and students received a live, up-close education on the application of the law.

The 10th Court of Appeals first came to SHSU six years ago, in 2011.  It was the brain-child of Chief Justice Tom Gray, and his colleagues Justice Al Scoggins and Justice Rex Davis enthusiastically agreed to come to Sam Houston. Professor Mike Yawn and the group “formerly known as the Junior Fellows” soon got into the act, and there has been much legal fun since then.

The education isn’t only watching the cases in action; it’s also seeing the courtroom procedure unfold.  From the “All Rise, Oyez,  Oyez, Oyez” 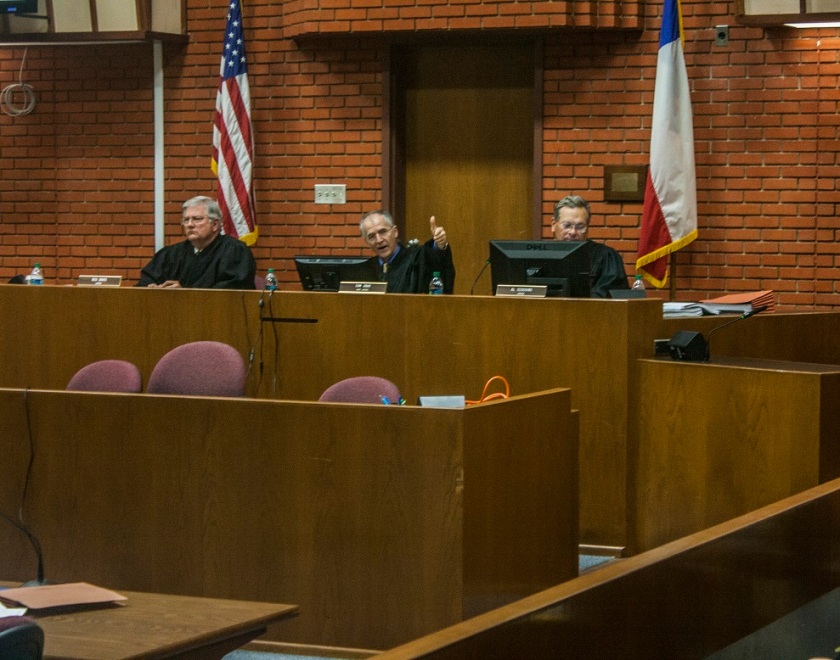 …to the attorneys, who are able (only in this setting) to explain the facts of the case to us… 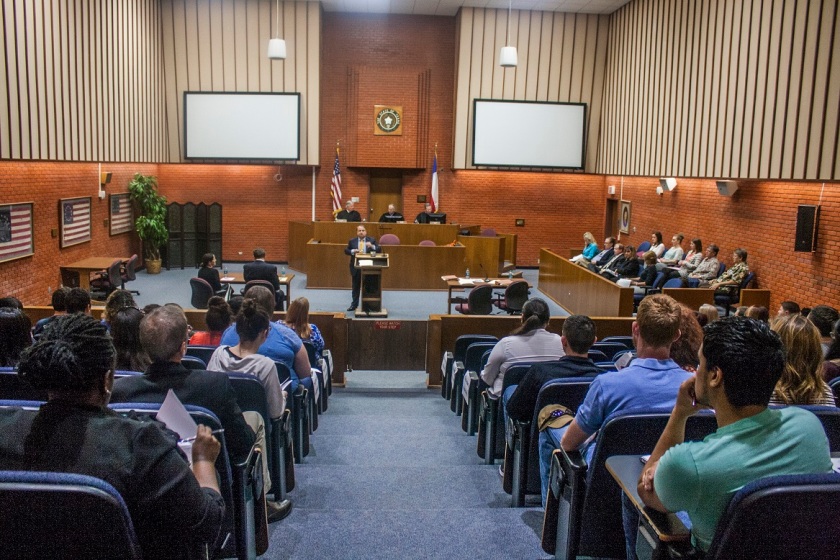 …to watching the attorneys’ behavior outside the courtroom… 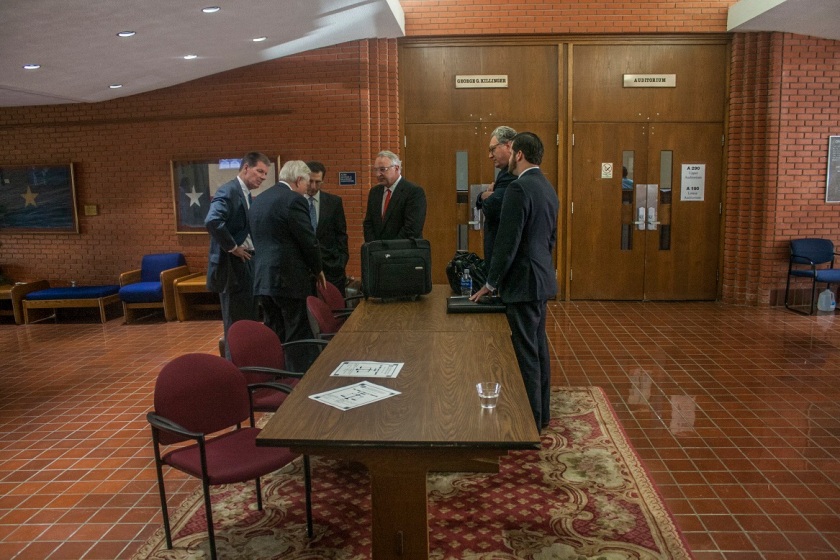 ..the education is unique–and that’s before we even talk about the cases!

Speaking of which, this year’s cases ran the legal gamut.  The 10am session (Capstone v. IES Contracting) actually involved SHSU, which believed construction of Sam Houston Village to be faulty.  This was a complex case, one involving multiple subcontractors, merges, and much elapsed time.

The 11am session (Annette Knopf and Stanley Gray v. William and Karen Gray) involved a disputed will, which had been written by Ms. Vada Allen.  She left property to her son, but confusion resulted from her will.  In particular, there was a question as to whether some of the property was a life estate–that is, given to her son for his lifetime–or whether he had outright ownership. This was not only an interesting legal situation, but also a good life lesson about the difficulty of writing your own will.  (Interestingly, this case involved the legal firm for which Kaitlyn Tyra works as a courier.)

As has become our custom, the Justices broke for lunch, and we were able to join them, along with other legal professionals in the community.  Just before we ate, Justice Tom Gray presented Professor Yawn with a signed copy of Supreme Court Justice Clarence Thomas’s autobiography, a nice touch to a nice day. 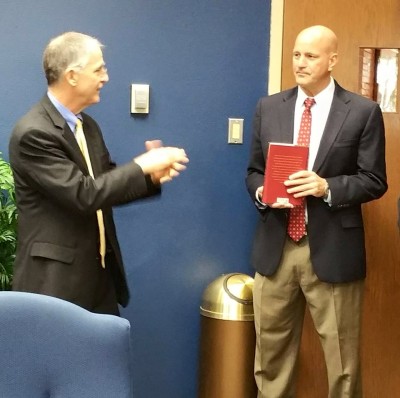 Also nice was the lunch conversation… 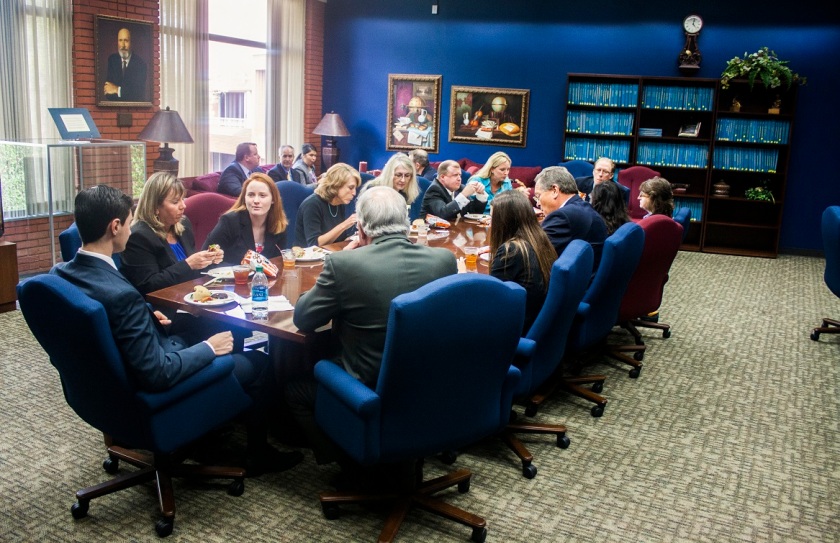 …which touched on school issues, our hopefulness about our legal careers, and the cases of the day.

Following lunch, we again worked the doors for the two most interesting cases.  The 1pm (in re Troy Paul) session involved Troy Paul and Destiny Spillers, who may or may not have been informally married.  They weren’t formally married, but Destiny argued that their relationship constituted a “common-law” marriage, which entitled her to spousal support–support, that is, beyond the $250,000 Mercedez that she was bought by Mr. Paul.  The case involves not only the question of support, but also of legal fees to the tune of $425,000.

The final case of the day (Noe Cosino v. The State of TX) involved the cutting-edge issue of a blood draw in the absence of a warrant.  The courts have previously held that such draws could be made in “exigent circumstance,” but more recent decisions have blurred the lines.

Following the cases, we spent a little more time with the Justices, taking photos and asking them to sign the case descriptions. 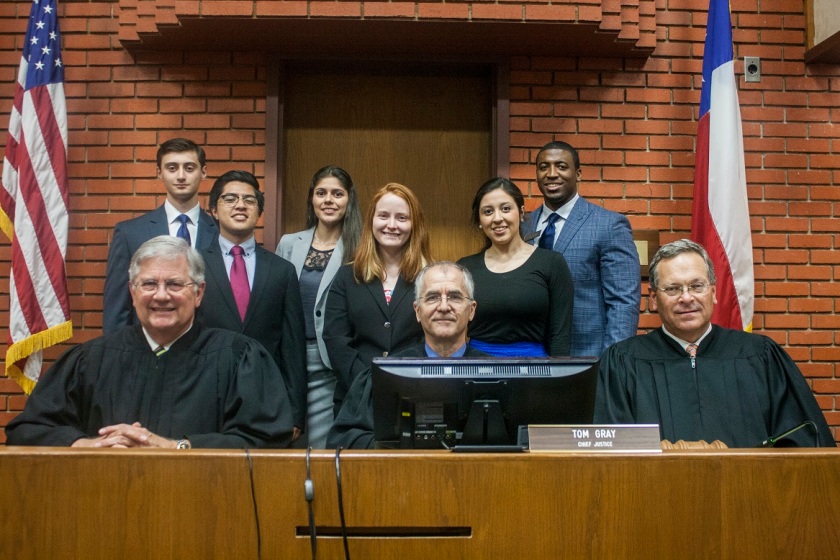 It was a fun morning and afternoon, a wonderful in-depth education for the LEAP Ambassadors, and for more than 200 SHSU students, a nice exposure to our legal system. 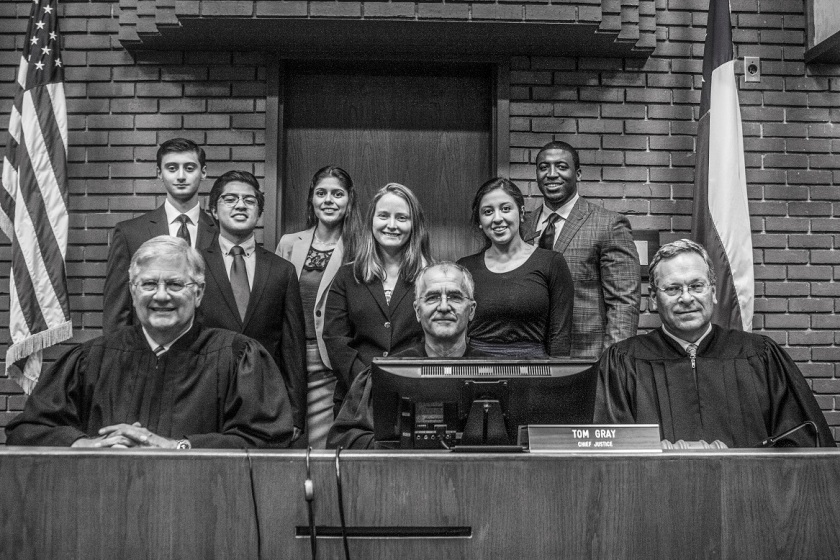