Robert Loughran left SHSU in 2011, graduating with a degree in Political Science and plans to go into education.  But he returned to his Bearkat home this Saturday, bringing 45 middle-schoolers and a few parents, all of whom wanted to learn more about Sam Houston State University.  On hand to help were the LEAP Ambassadors, who served as young chaperones, tour guides, and mentors for a six-hour workday on Saturday.

To begin the day LEAP Ambassadors welcomed the AVID Students, who travelled 3 hours to visit Huntsville and Sam Houston State University, at Carbonero‘s for lunch. Carboneros is a local restaurant that serves authentic Salvadoran food. At the restaurant, the students were seated in groups of 7-8 with their classmates and also with one of the six LEAP Ambassadors who were present to mentor them throughout the day. This made lunch interactive and interesting because we all got to learn a little about each other. The students and volunteers got to enjoy a buffet-style lunch which included pupusas, rotisserie chicken, chicken/beef enchiladas, tacos al carbon, their famous chaufa rice, and hamburgers for the not-so-adventurous students. For an hour we ate, talked about what the day had in store, prepared for the next portion of the day and enjoyed the enthusiasm of 45 students who travelled from a Dallas school district—on a Saturday—to get a taste of El Salvadoran food and of college. 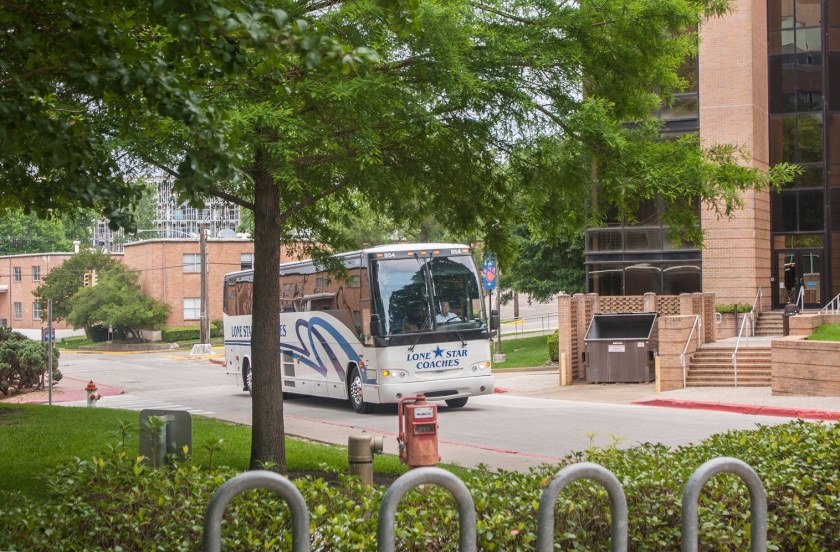 The goal of the class was to give the students a realistic idea of what to expect in a real college level course.  To that end, the students were given three days to read the Bill of Rights and summaries of four court cases.

It was a lot to chew on for middle schoolers, and the grades reflected that. 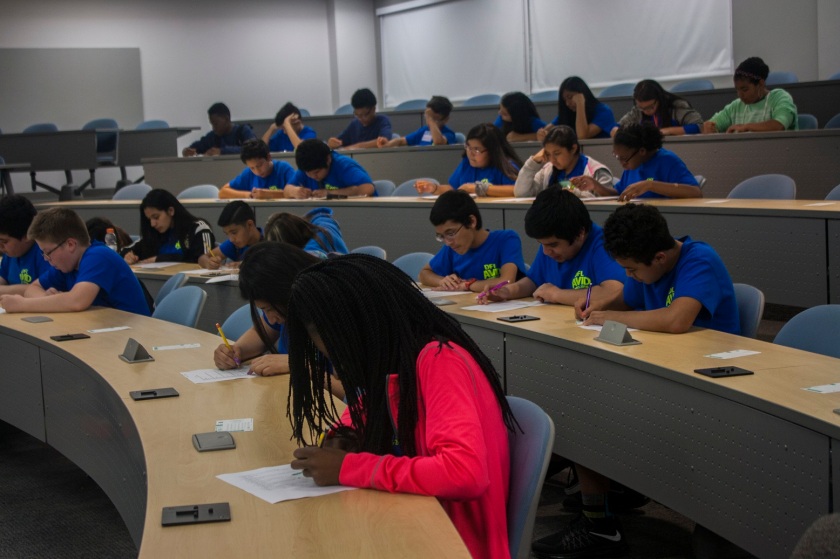 But the students perked up for Professor Yawn’s lecture, which ranged from the criminal justice amendments of the US Constitution to the role that technology plays in changing interpretations of “search and seizure.” 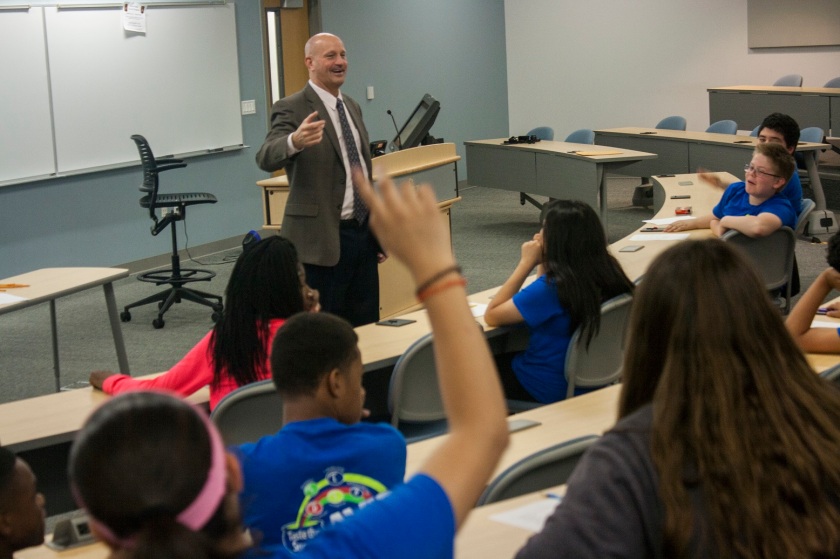 The students eagerly asked questions and were willing to participate in Professor Yawn’s role-playing examples—including an arrest and detention which, incidentally, tied in to the days’ later activities. 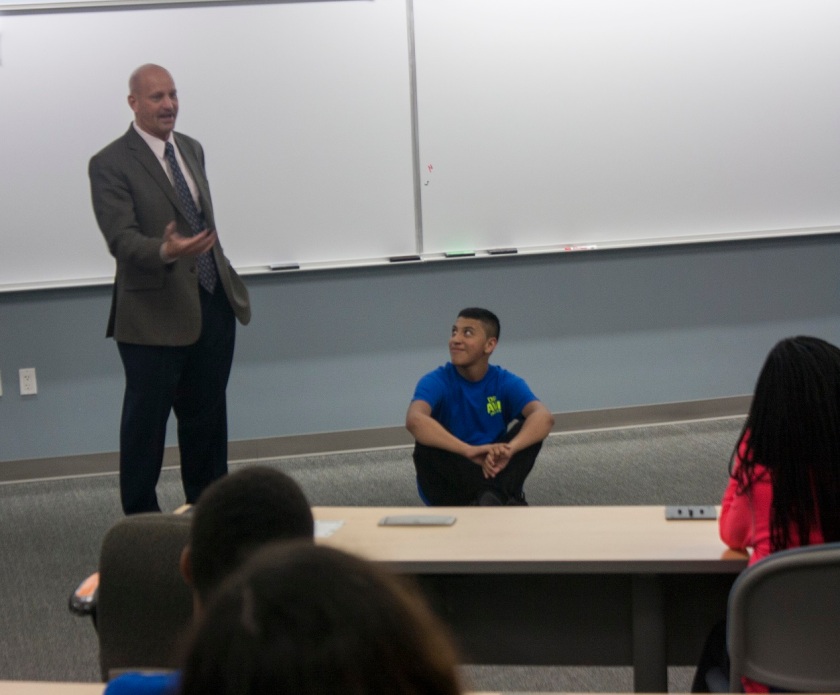 Many students commented that the class was their favorite part of the day! Even LEAP Ambassadors enjoyed and learned from the lecture.

Breaking into groups, the Ambassadors teamed up to lead students on a tour across campus. Visiting the Newton Gresham Library, the Lowman Student Center, Rec Sports, the Performing Arts Center, and the College of Criminal Justice, we hoped each group got a sampling of what SHSU offers academically and recreationally. The tour time allowed students to ask questions and learn more about the University. Even LEAP Ambassadors brushed up on the University’s history. For example, we learned that SHSU became the first fully air-conditioned campus in the world during SHSU President Harmon L. Lowman’s presidency! Once the tours were finished, we regrouped and AVID students eagerly boarded the bus to visit the Texas Prison Museum.

It is impossible to come to Huntsville without knowing at least three things about the area: (1) it’s the home of Sam Houston, the man; (2) it’s the home of Sam Houston, the University; and (3) Huntsville has prisons. The AVID students got a briefing on the first two during class and the SHSU tour and their final destination allowed them to experience the history of the Texas Prison System at the Texas Prison Museum.

Visitors to the Museum are encouraged to watch a short history of the Texas Prison system when they arrive, and AVID students eagerly sat for the eight-minute program. 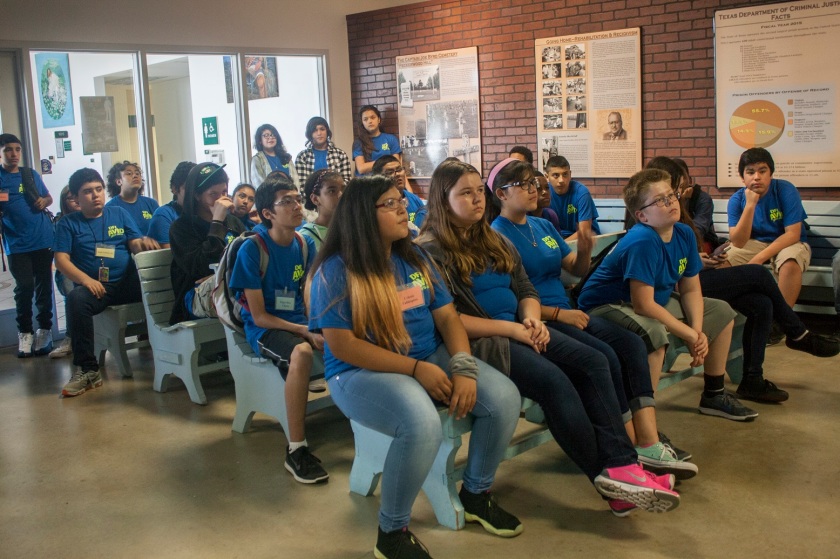 They were also treated to a brief overview by Jim Willett, who worked for the prison for 30 years, many of those years as Warden of the Walls Unit.  He provided a few interesting details, and then showed the young students a large model of the Unit he once supervised. 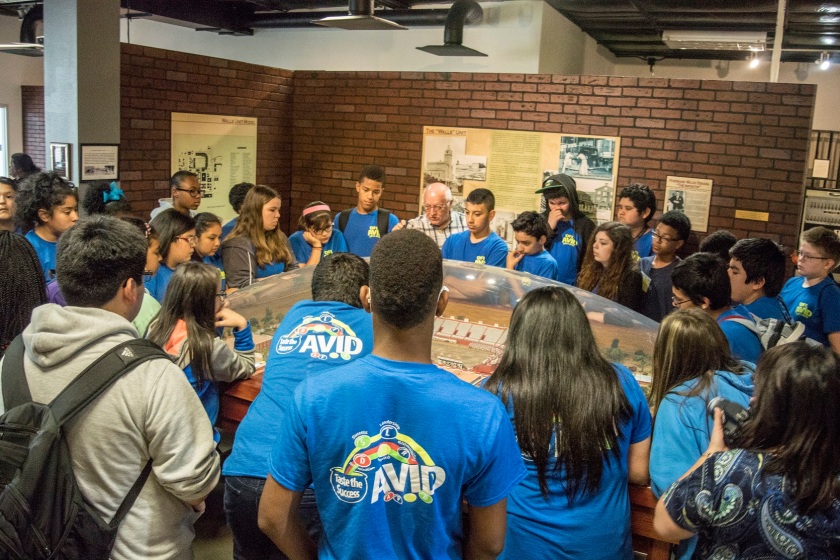 The students’ attention was also caught by the masterful pieces of art located throughout the museum. One piece that caught everyone’s attention was a large piece of wood, much like a tree stump, that had animal faces carved into it. It is an impressive piece of art work, and it’s difficult and sad to think about it being created in a prison.

Of course, the most famous piece of wood in the Museum is the prison’s notorious electric chair.  Located toward the rear of the Museum, surrounded by the institutional green walls of the prison system and illuminated by a single fluorescent light, Ol’ Sparky sits forlornly. It’s chilling to experience this instrument from a few feet away. 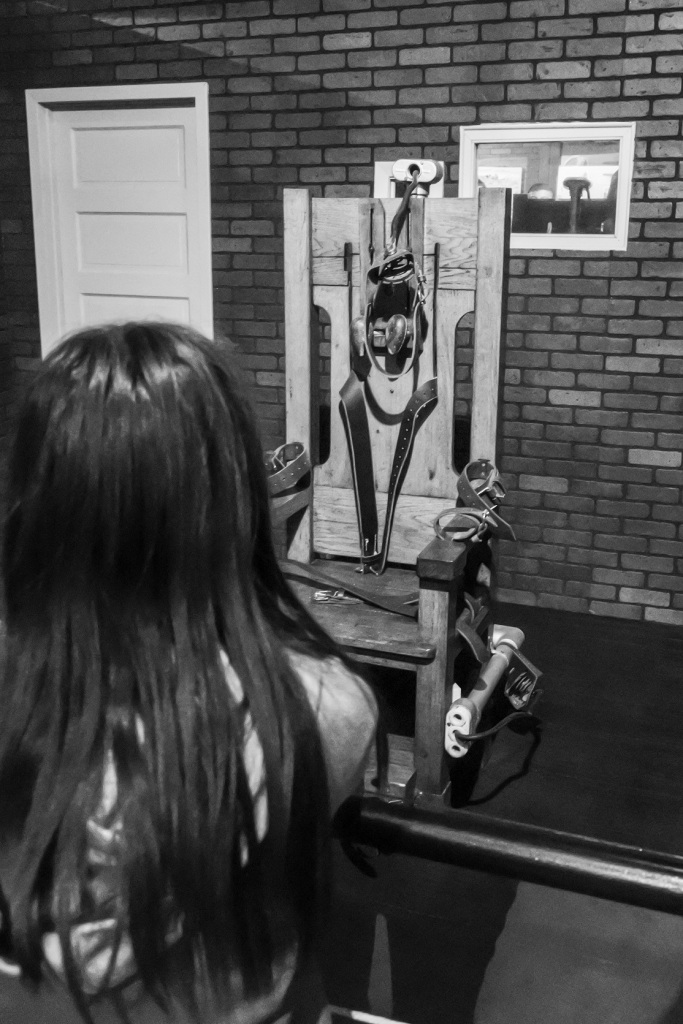 Another popular exhibit was the illegal contraband that has been confiscated from inmates over the years. These items would impress any engineer, architect, or inventor. Pipe shotguns made of lined paper towel rolls, lead and string; a tattoo machines made from a pencil and stored in a sock; hollowed out wood-soled shoes that hid a knife blade, much like a James Bond gadget. Seeing these things close up not only made us all thankful for the glass separating the contraband from us, but also for our freedom.

Of course, no trip to the Texas Prison Museum is complete without a photograph of the visitors in the model jail cell.  Students displayed way too much pleasure while posing in the jail cells. 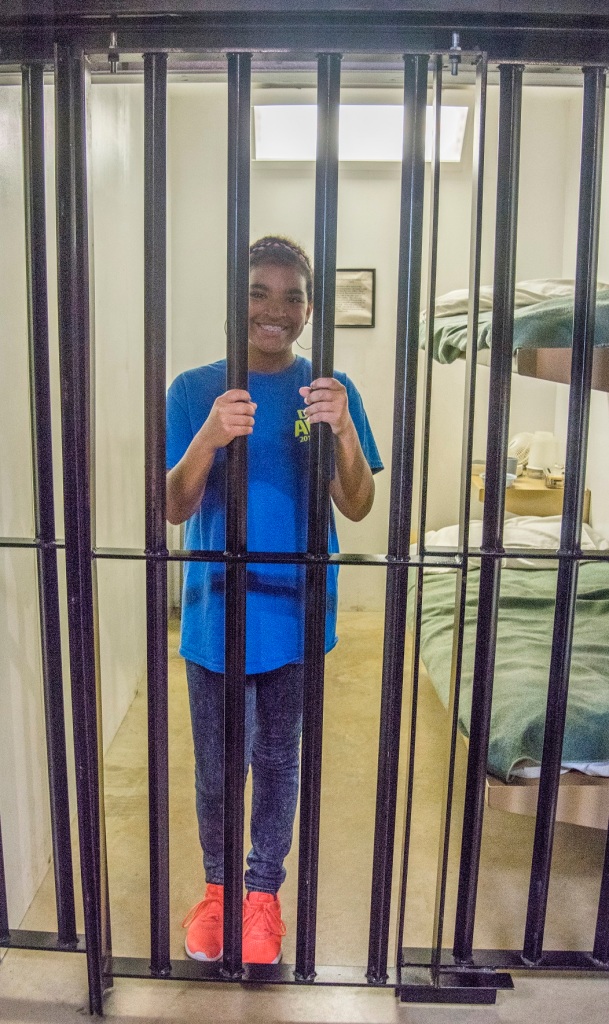 The exhibits of the Texas Prison Museum have valuable lessons to teach both young and old.  And these exact lessons are why the LEAP Ambassadors and AVID Students sacrificed a Saturday to educate and empower ourselves with knowledge and service. 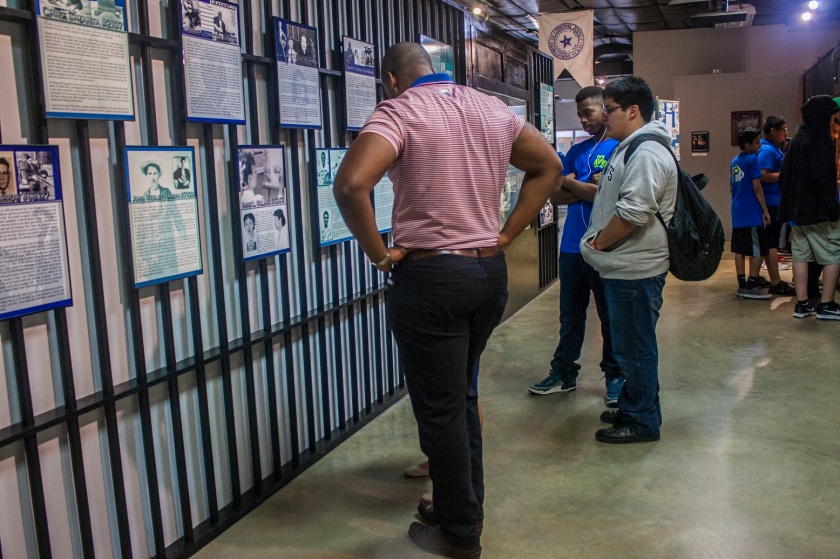 It was a long day, but so worth it! It gave AVID students an idea of what to expect in college and what the Huntsville community can offer and it prompted the LEAP Ambassadors to play a mentorship role, which for most, was a new experience. I believe that we all benefited from what LEAP calls AVID Day and we hope that we can do it again in the future. 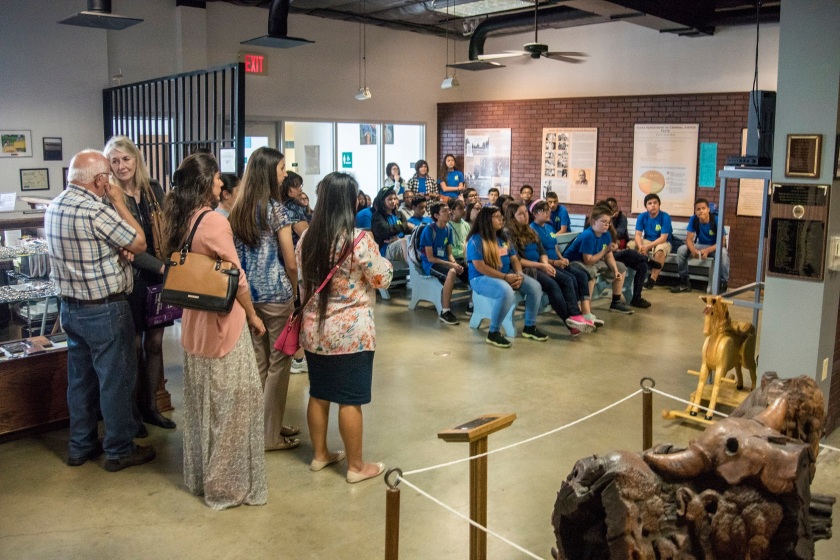