On Thursday February 16, 2017, I traveled to the State Capital of Texas in Austin.  I was selected to serve as an Honorary Page in the House of Representatives  by Representative Ernest Bailes.

When I first arrived I was taken on a tour of the Capital by Sarah Flautt, a real Page. As an honorary page it was my duty to be a helper to her.   During this tour, Sarah took me to see the State Treasury, where I saw a very old printing press.  I assisted her by bringing name plates to the offices of the Sergeants of the House.  I was able to go in a special underground tunnel and a private elevator, that only Pages have access to.   I met my sponsor, Representative Ernest Bailes, who brought me to the front of the House Chamber where I was able to tap the gavel and even got to sit at his desk.

As part of the Honorary Page program, I received a key chain as a souvenir, as well as a kid’s guide to the Texas House of Representative booklet. I also got to keep my name tag that I received when I arrived (even though my name was misspelled). 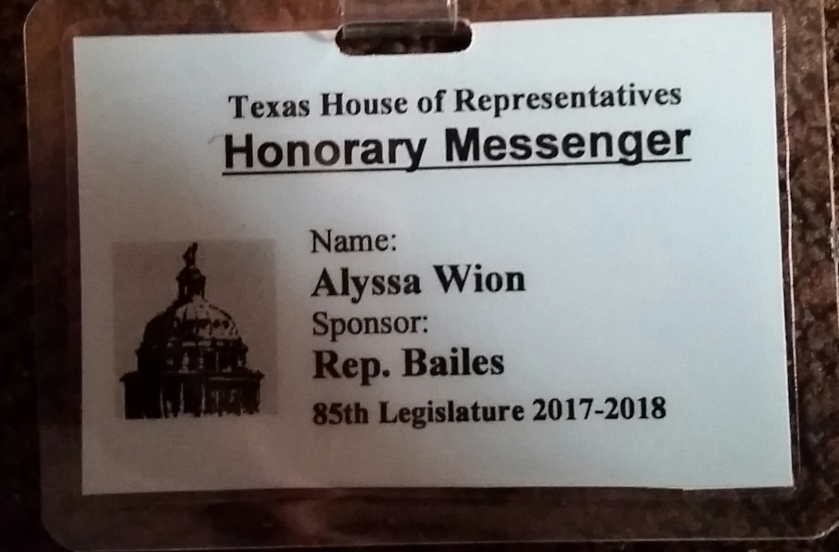 While I was busy doing real work, my travel escorts (Richard and Dorothy Yawn) spent much of the morning doing photo ops and otherwise engaged in frivolities.

Overall, I really enjoyed my experience as an Honorary Page, especially meeting Representative Bailes and learning how important a Page’s work is to the House of Representatives.