On Sunday, July 6th, the LEAP Ambassadors were enthusiastic to return to Houston. One of our favorite stops in Houston was the Moody Art Gallery, which Betty Moody generously opened to us on a Sunday. 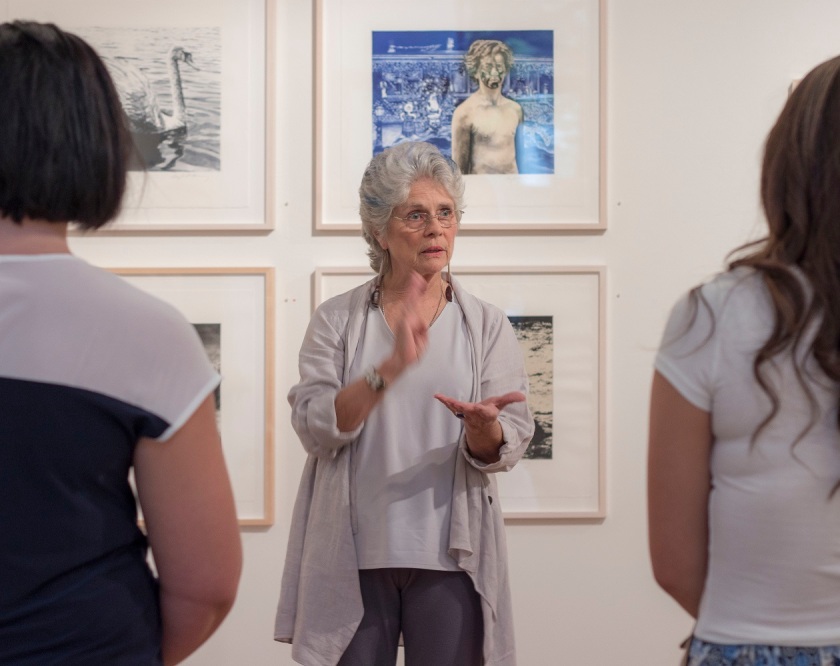 As on our previous visit to the gallery, Ms. Moody treated us to a great tour. The works exhibited in her gallery were from Flatbed Press in Austin, with work by some of the most talented of artists: Luis Jimenez, Terry Allen, and Mary McCleary, among others. 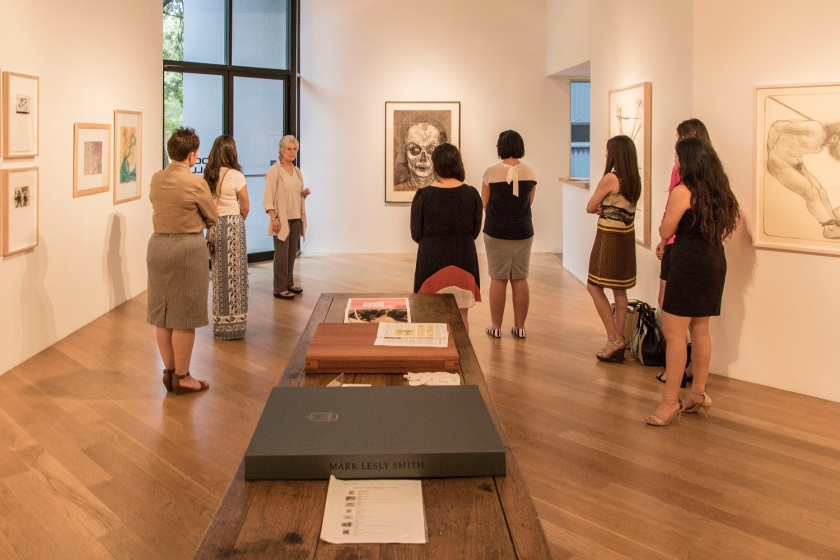 Ms. Moody, displaying her immense knowledge in art, explained to us the various forms of printing showcased in the exhibit.

To begin her tour, Ms. Moody pointed out one of Luis Jimenez’s prints, Abu Ghraib. Reminiscent of Francisco de Goya’s “The Disasters of War,” Jimenez took to oil-crayon to sketch out this depiction of contorted, enslaved bodies.

Notice the mediums that he used to make this print. Jimenez, as Ms. Moody described, used a form of printmaking called lithography. In this process, the artist uses an oil-based crayon to draw onto Bavarian limestone (this limestone offers the greatest porosity). The surface is then washed with water. Following this rinse, an oil-soaked paper is placed on the surface of the limestone, pressed, and then removed from the stone. The reverse image from the limestone is then permanently inked on the paper. However, not every print in the exhibit was conceived through the same process.

A series of small Terry Allen works, for example, were printed through line etching, aquatint, and chine collé. 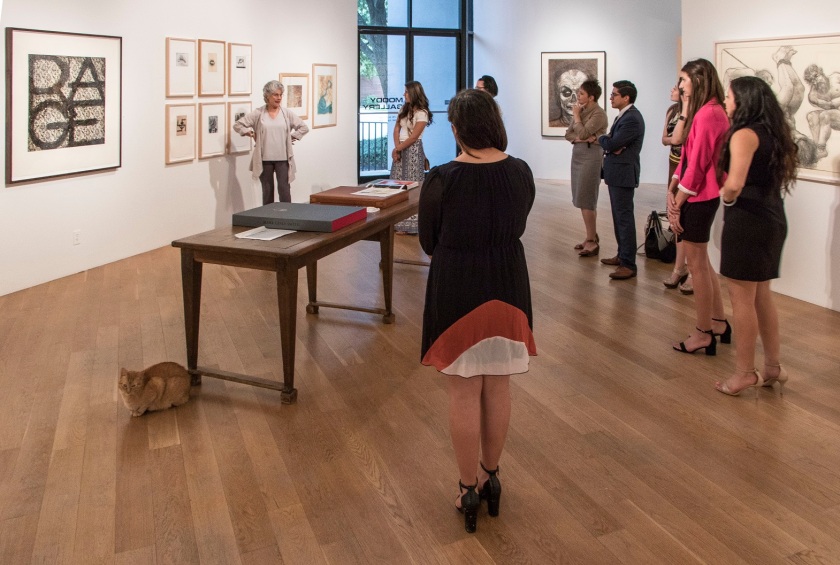 If these terms are foreign there is no need for alarm. For us, we had limited to no knowledge on print making. Thankfully, Ms. Moody had the patience and enthusiasm to describe all these various print-making processes. As complicated as these are, one thing that each print showed us was that, like any painting or drawing, prints are just another form of expression. No print is the same since each has wonderful, subtle differences that set them apart from each in the series. Similarly, our second visit to Ms. Moody’s spectacular gallery was filled with new attractions that we all marveled at.

For one of our alumni (Alex Galvan), it was her first trip to the Moody Gallery.  Ms. Moody took her to behind the scenes, where Alex had a chance to see (and hold!) a Picasso… 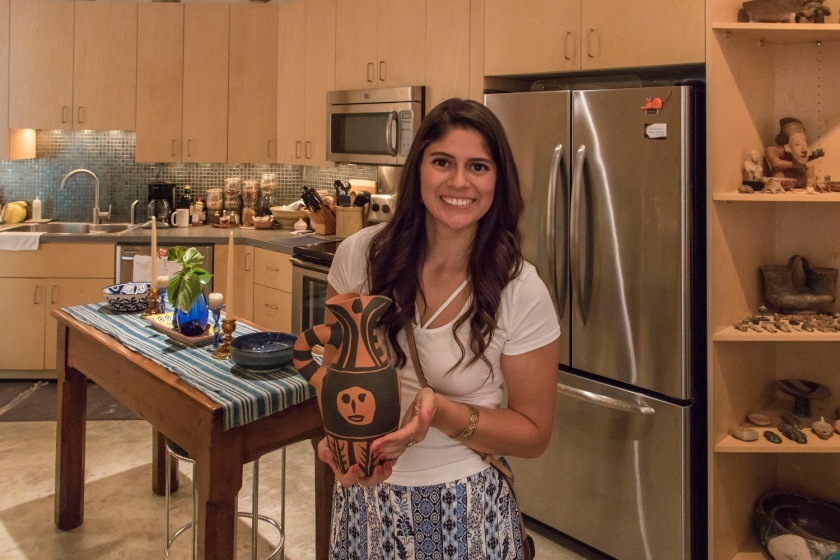 …and a wonderful bird created by Moody’s husband, Bill Steffy.

One of the more interesting pieces she saw was a work by Luis Jimenez.  The piece was given to Steffy following his heart attack, and it depicts Steffy punching death, with an inscription to Steffy saying something to the effect of, “Congratulations on kicking death to the curb.”

After visiting Moody Gallery, we drove to one of the Ambassador’s favorite Houston restaurants, the Black Walnut Café. There we met Junior Fellow/LEAP Alumni Austin Campbell, Justin Beiser and his fiancee Chelsea Halblieb. Ms. Moody and Alex Galvan also joined us, which added to the conversation and fun! Ambassadors sampled dishes such as the French dip sandwich, the signature grilled chicken breast topped with pico de gallo and walnuts, as well as the spicy chicken jalapeño pasta. Our group enjoyed visiting with alumni and sharing stories over a tasty meal. Some even decided to indulge in dessert! After our bellies were full, we headed to the Alley Theatre, eager to see The 39 Steps.

Written by Patrick Barlow, The 39 Steps is a satiric farce of all things Alfred Hitchcock. Bearing the same name as the Hitchcock thriller, the play The 39 Steps loosely follows the same plot of the movie: an innocent man is framed for a murder he did not commit and must now clear his name, revealing the mystery of the allusive ring of spies “The 39 Steps” along the way. There are 150 roles in the play, but only four cast members, making for a whimsical adventure full of laughter and fun.

Some of us had never been to the Alley Theatre and this performance made the visit all the more special. In the intimate setting of the theatre, we had the chance to appreciate every comic bit with more enthusiasm.

As said before, the play was performed by four actors (three male and one female). But that did not mean that there were only four characters. These four actors wore many hats (figuratively and literally).  Incompetent cops, murderous spies, farmers, and other comic personas were all played by this small team of actors. The ability of these actors to switch roles from one line to the next, personified at times by the mere switch of a hat, made the performance a spectacular scene of comedy. But apart from the physical humor and comical bits, what added to the comedy of the play were the occasional references at Hitchcock films. Through satiric recreations of the shower scene from Psycho, the plane scene from North by Northwest, or references to Vertigo, Strangers on a Train, and other classic films from the “Master of Suspense”, the play kept Hitchcock fans entertained with the cleverly incorporated puns.

The play’s non-stop silliness kept us at a state of uninterrupted guffaw for the whole two or so hours. Alex was even heard saying “it’s not only the play making me laugh, hearing your giggles and chuckles makes me laugh even more.” Whether she was referring to Professor Yawn, Brian, Beatriz, or all three combined (all three could be heard laughing throughout the play) we are not sure of. What we are certain of is that The 39 Steps was a performance we will not so easily forget.

At the end of the play, we caught our breath from the continuous laughter and grouped together for a photo-op with Alfred Hitchcock. Well, in reality it was just his famous silhouette, but we could all feel his imposing presence in the theatre.

We said our farewells to our fellow alumni with a sense of melancholy. For Ryan Brim, who is heading off to college, we wished him luck on his notorious voyage to Arkansas. Without a shadow of a doubt, we are sure that his time in college will not make him psycho. And even though we do not encourage him to dial m for murder in case he feels vertigo on his first day of school, he is well aware that the LEAPsters are more than strangers on a train and can always count on us to cast a rope to pull him into our lifeboat.

For the rest of us, we headed home after a fun-filled Sunday.

Hopeful that we can come back for another visit to Moody Gallery and the Alley theatre, we now look forward to our next adventure at Big Bend. The summer is drawing to a close, but not without the LEAP Ambassadors making the most out of the last few days before the Fall semester begins.