The LEAP Ambassadors are not tired of traveling. Just a week after returning from Washington, D.C., we have embarked on our next adventure, a revisit of Caddo Lake. As many of you may remember, we started this adventure in the summer when we came with Mark Burns to aid him in his photography project. Now we are here to finish the job on this Return to Caddo Lake trip.

Our day began with a 5:00 AM start. We were in search of the perfect spot to witness a rising sun along an autumn-painted background. We walked the dock to greet Wes Holland, our captain and tour guide, while the chilly breeze began to hit our faces and wake us up. Some of us were veterans of the Caddo Lake experience and were already familiar with the lake’s overwhelming beauty. Others, like Ryan and Makayla, were first timers. They would soon get to meet this natural wonderland.

Caddo Lake would not be as much fun without our tour guide who always makes it a point to teach us something new. Today, he taught Ryan and Makayla about the history of the bald cypress tree. He also taught them that Spanish moss is related to pineapples and even let them feel the moss in its various incarnations.

The sun began to rise around 7:00 am and that’s when the real fun began.

We quickly noticed that the wild life was up and ready for another day. We saw Blue and White Herons, fishes, frogs, and many more birds. We used this tour to become more familiar with the cameras and film equipment that we brought along. Makayla, one of the newest members of LEAP, captured some great shots of Blue Herons. 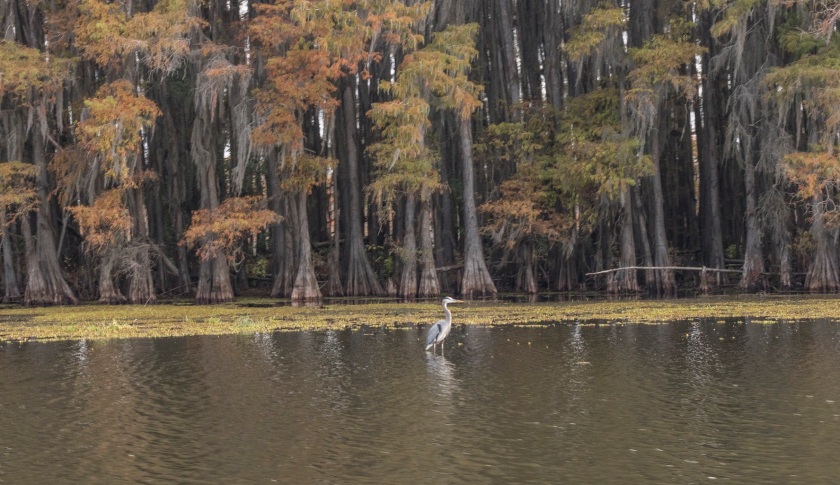 The sun peaked over the trees as we headed back to the dock. As we sped through the winding river ways, Wes remembered a quote from Texas Monthly which described Caddo Lake, “In Caddo Lake, one can find beauty in its constant state of decay.” A better description would be hard to come across to define the lake’s beauty. But we soon discovered that amazing sights were not confined to Caddo Lake as we explored the surrounding community of Jefferson.

By Ryan Knesek and Brian Aldaco

This small town was in 1845 a major steamboat port which created a bustling community of over 30,000 people. Although the community has downsized to a little over 2,000 inhabitants, we were excited to return to this small-town treasure.

After an early morning we were all ready for a filling lunch. We then chose Austin Street Bistro to calm this craving. Located along E. Austin St. on the South part of town, the open-window seating gave us a great view of Jeffersonians going about their day and enjoying it just as much as we were. The assortments of lunch items were plentiful, but finally I (Brian) decided on a potato and broccoli soup, a very wise choice.

After tasting a little of Jefferson we went in search of treats at the Jefferson General Store, right next door.

Inside, the vintage-style shop was filled with candy, toys, amusing books, and other such delights that any 10 year old, I mean, that any LEAPster could enjoy. Quickly we grabbed our paper bags and flooded them with Laffy Taffy, Jolly Ranchers, bubble gum, and more sugary treats to soothe our sweet tooth.

As we continued to experience the town’s old-fashioned delights, we were captivated by one of the town’s abandoned railroad tracks.

The train formerly used a wooden bridge, that has been left to remind visitors and residents of the importance of the rail road in the town’s development. But now, as it stood conquered by nature with vines enveloping its tracks, it reminded us of Wes’s appreciation for beauty in constant decay.

However, not all of the town’s Victorian-era structures laid abandoned. On the contrary, many of these constructions are still in full function like the plethora of historic homes through out town.

A majority of the town’s homes are modeled after Greek and French style architecture. One house in particular, The House of Seasons, has visible square pillars and an overall symmetrical building construction; a design based on Greek revival architecture. Another popular housing construction is the Queen Anne style. LEAP Ambassadors learned to differentiate between a cupola, which creates symmetric housing, and a turret, which are usually built on a home’s periphery to create an asymmetric silhouette. We noticed this later structure when we passed by the Benefield House.

The town of Jefferson creates an insight into the trading routes of pre-road-construction commerce and illustrates the Americana theme in its stores and cuisine. While LEAP Ambassadors perused the trinkets, pictures, novelty items, and antiques from the Port Jefferson Outpost, we admired the unique history of the city. 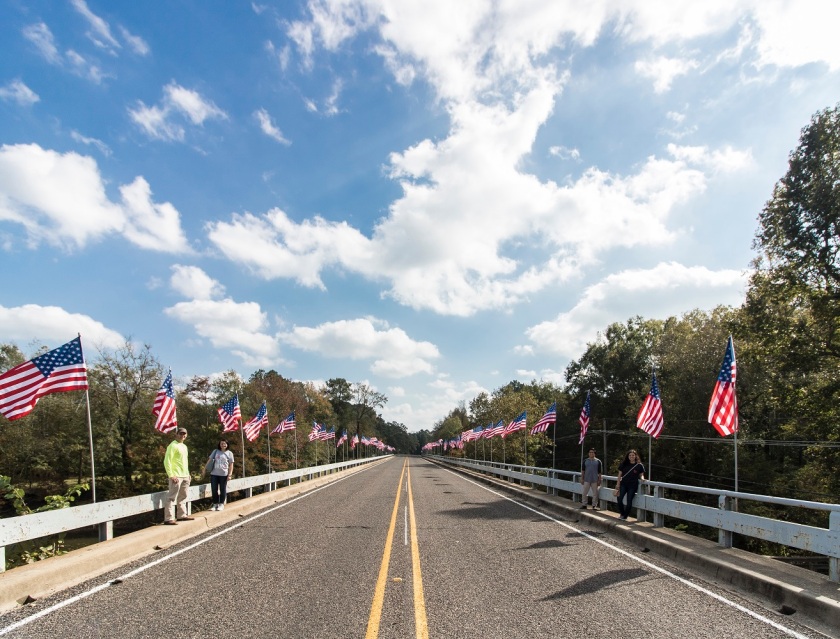 The experience added onto the LEAP Ambassador’s appreciation for small cities, and the often-overlooked history of small town America.

After taking a quick 45-minute nap at the hotel, we packed into the car to head back to Caddo Lake. As the sun began to sink into the horizon we pulled out of the dock and into the beautiful waters of Caddo Lake. 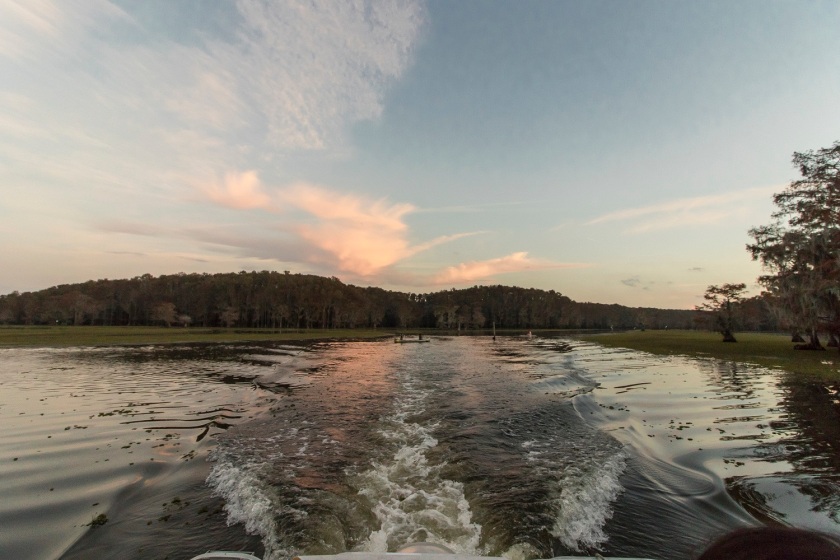 We captured such beautiful pictures and videos with the setting sun hitting the autumn-colored leaves.

During the tour, Wes shared many stories and facts about the lake and even let me drive the boat!

As the almost full moon began to rise we took our final pictures for the day. Ryan and I truly enjoyed our first time at Caddo Lake, while Christina and Brian were experiencing its beauty in a new autumn light.

On our drive back to Marshall, we drove into downtown to catch a quick dinner at Pazzeria by Pietro’s. We treated our selves to a Philly Connection pizza pie, topped with grilled steak, caramelized onion, and calabrese sweet peppers, and a Nonno Pipino, topped with shrimp on top of a garlic alfredo sauce. When we finished our dinner, we noticed how the night was lively with a band performing rock classics on the side walk. The streets of Marshall were also adorned with christmas lights and other holiday adornments. But tomorrow we would see more of the town, so we boarded our van ready to get some rest. After a long and adventure-filled day, we were all eager to start before day break in the morning.