by Victoria McClendon-Leggett and Chase Kennemer

For the past eight years the LEAP Center has had the honor of bringing the Texas Tenth Court of Appeals to Sam Houston State University. The court has the privilege to travel to any county in which they have jurisdiction. Today the Court tried three trials in the Beto Criminal Justice Center’s Hazel B. Kerper Courtroom.

There were three oral arguments held there, two involving Texas A&M, and one involving a homicide case in Walker County. Students across campus packed the court room to the point where the Ambassadors gave up their seats to ensure there enough seats for people to sit!

With three separate cases at different times, we held a steady flow of people inside of the court room listening and thinking about what the outcome of the cases would be. While the veteran Ambassadors have experienced this before, we all still had a sense of awe and wonder as we watched the cases go back and forth. 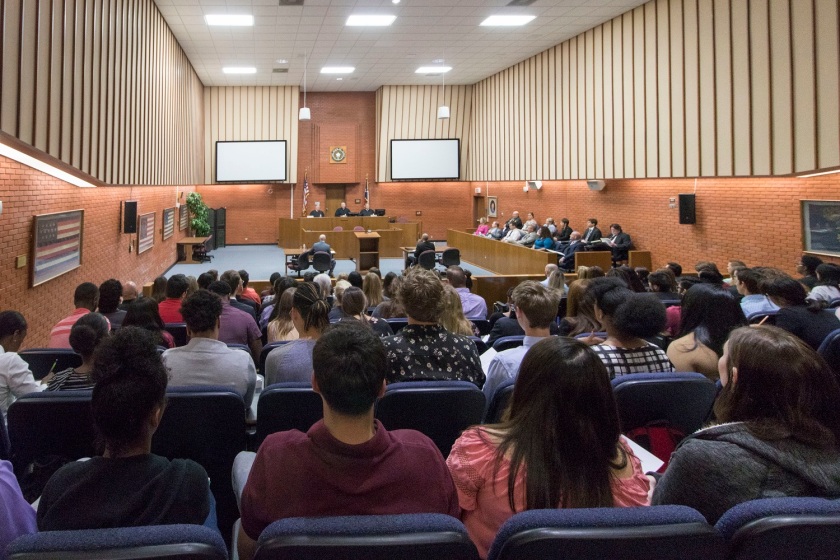 As the Justices sat in their chairs, Chief Justice Gray explained the process of the Appeals Court.

The process is one of review, rather than retrying a case.  In other words, these cases have already been tried.  Their purpose here is to review the procedures followed during the original trial to determine whether they were appropriate.

These hearings are also unique in that the attorneys are given three minutes at the beginning of each hearing to turn to the audience–mostly students–and explain the facts of the case.  This segment has no bearing on the justices, but allows the audience to better follow the legal arguments. 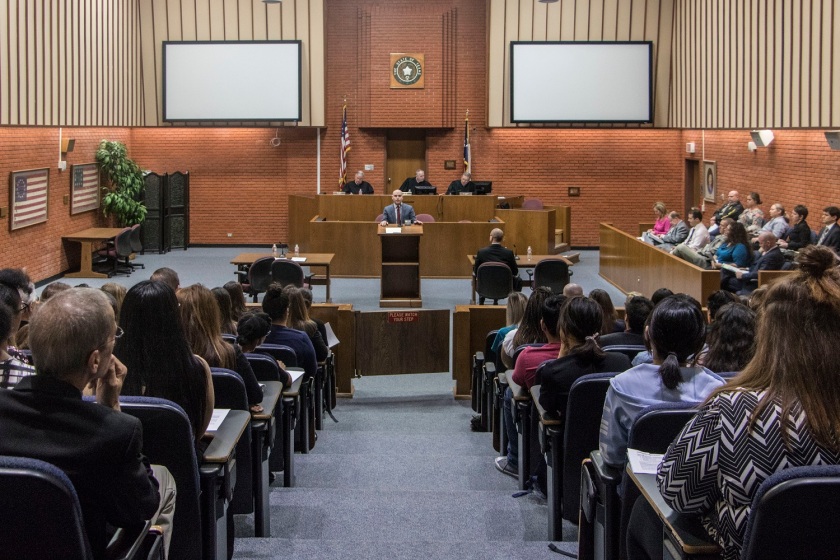 Understanding background information of the case allowed us to better understand the oral arguments both attorneys made. Each party had approximately 20 minutes of argument time and, as we learned, the Appellant who presents the argument first, also receives five minutes for rebuttal after the Appellee has concluded his argument. During the last five minutes, the Appellant’s purpose is to counterclaim the argument(s) delivered by the other attorney.

The first case was one of wrongful death.  A TAMU student ingested cyanide obtained from a TAMU Lab, and his parents sued for wrongful death.  With the parents in the courtroom, this was a sad and somber case to hear.

The second case involved a homicide in Walker County, and featured local attorney Paxton Adams for the defense… 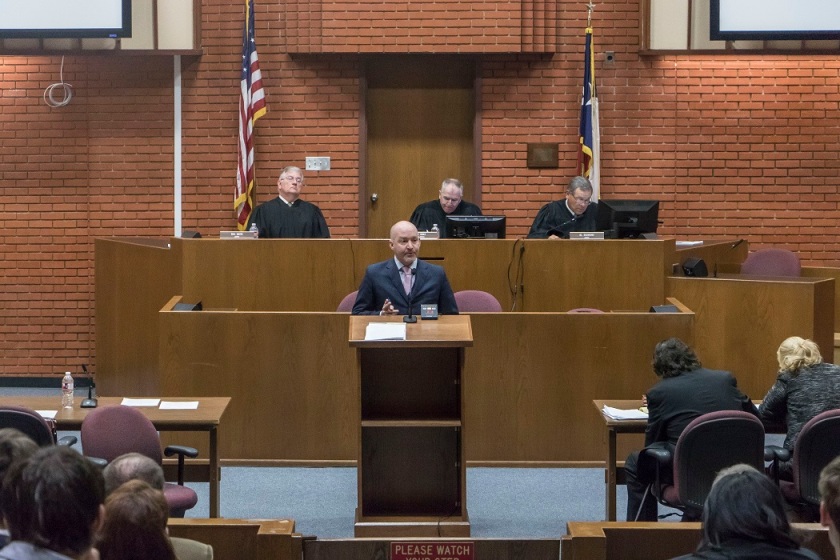 With strong attendance, interesting cases, and a unique opportunity in our midst, the court adjourned for lunch–which presented a new opportunity for the Ambassadors.

After hearing the second oral argument, the crowds dispersed and a few of us lucky students had the opportunity to have lunch with the justices and two of our local attorneys, David Moorman and Will Durham, the latter of whom is the Walker County District Attorney Elect. We enjoyed a spread of sandwiches, pasta salad, potato chips, and iced tea as we sat around the long conference table in the Beto Criminal Justice Center on campus.

We were able to ask both the justices and attorneys about law school and what they enjoy most about their careers.

Chief Justice Gray told us that they picked these three cases especially to be heard on our campus because two revolved around another university like ours, and the other occurred here in Walker county.

The justices also praised the Criminal Justice Center’s Kerper Courtroom (thank you Dean Lyons!) and Sam Houston State University’s excellent facilities. While our university may not be as well-known as others, the privilege of having the 10th Court of Appeals hear cases on our campus is a major opportunity for pre-law students or others who like to follow the law.

We wished we were able to have more time with the justices, but our lunch time was limited because the last case was scheduled to start at 1pm. We thanked the justices for traveling all the way to our school and then got ready to sit in on the last case.

The final case of the day involved a TAMU student who may or may not have been evading arrest.  He was found guilty by the trial court, but his attorneys argued that the jury failed to properly apply the law: that, without knowing definitively that an officer–who was on foot–was asking him to pull over, he could not be convicted of evading arrest.

His attorney was eloquent and made a clear case.  The state, however, argued that this was not even a case for appeal.

Although these cases are a wonderful way to see the process unfold, they do not bring resolution!  The cases may take months to be decided, so we were left wondering which side would prevail. 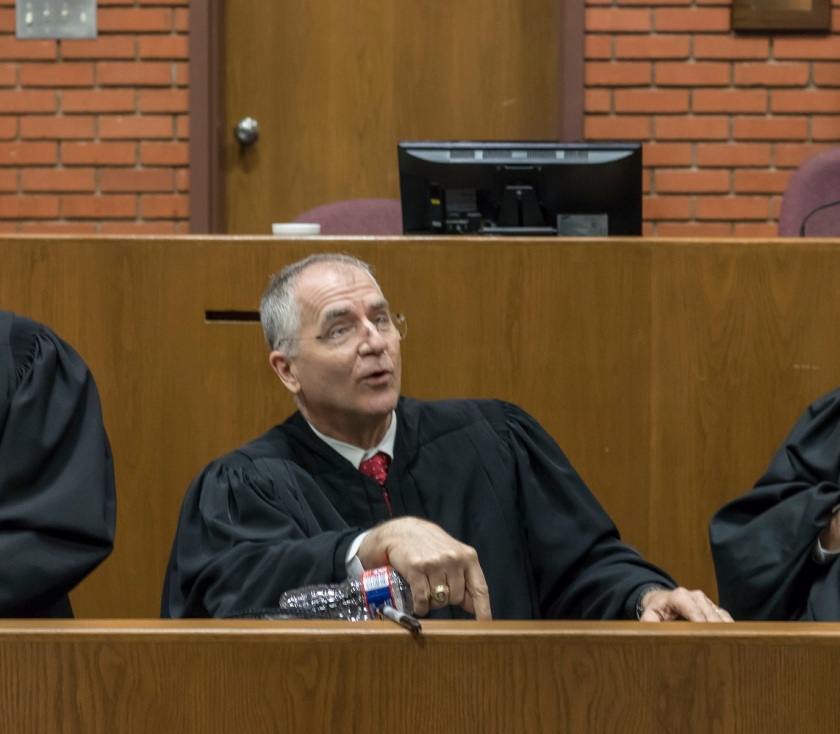 …and also to take a picture with all of the Justices (Justice Davis, Chief Justice Gray, and Justice Scoggins). 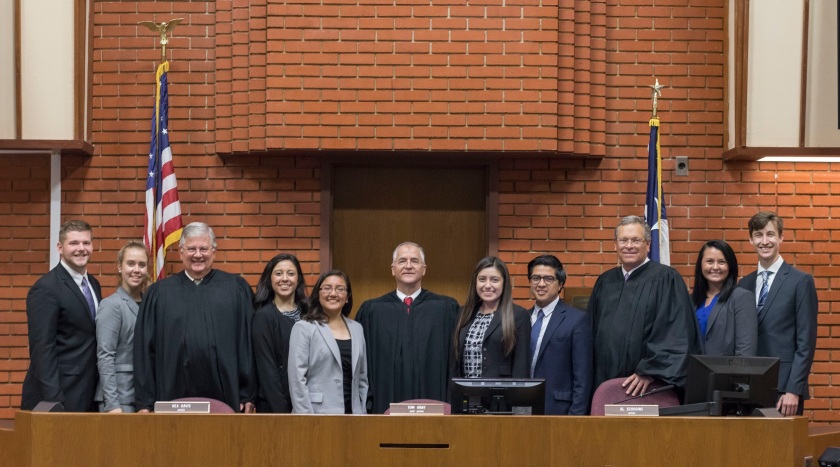 We are so grateful to all the justices to take their time to travel all the way to Huntsville and allow us to learn as much as possible from them.