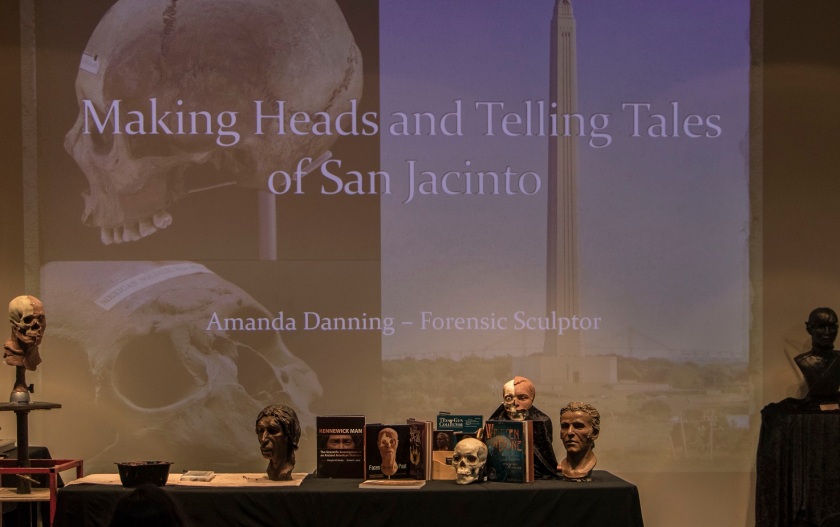 Amanda Danning, a forensic artist was has done work for the Smithsonian Museum, partnered with the SHMM to recreate five faces from skulls left behind on the battlefield.  The project benefits from Dannings’ expertise and lively style, and also from the fascinating history of the skulls.

Following the War for Texas Independence, James Audubon traveled the country in search of new birds to paint for his book, Birds of America. While in the area, he visited the San Jacinto battlegrounds to collect a few skulls for his friend Samuel Morton in Pennsylvania who had a cranial collection. The skulls were preserved and recently commissioned by the SHMM to have the faces forensically recreated.

Ms. Danning showed each skulls and discussed the injuries to them, and even walked us through the causes of death.

Her explanations made us feel as if we were standing on the battlefield looking in over the war-torn land.

After learning about the skulls of the soldiers, Ms. Danning showed us the process for recreating faces. She begins the process by creating molds from the skulls. Once she has a good mold, she can begin adding facial features based on the indentations within the skull.

Ms. Danning even explained how the indentations on the bone of the nose hole gives clues as to the shape on the nose. It was intriguing and overwhelming to learn about how Ms. Danning takes numerous scientific documents like statements from doctors, x-rays, and cat scans then translates the information into scientifically accurate art.

For the Ambassador’s first exposure to forensic art, it was a very informative workshop. We learned about a new career field and one of the ways science combines with art to create realistic recreations of those whose memory would otherwise be lost. Thank you to the Sam Houston Memorial Museum for hosting this wonderful opportunity!