The longest convention day is the second, when much of the body’s work should get done.  Today was a long day, but it wasn’t as productive as it had the potential to be.

The day began with 8am meetings organized by Senate District, in which we set our preferences for SREC reps and recommendations for State Chair.  Our County Chair, Linda McKenzie, led the delegation in the pledge…

After being delayed by some late arrivals, we got down to business.  Our SREC Reps, Nita Davidson and Mike McCloskey, both won reelection as our SREC Committee members.  Davidson won without contest, and McCloskey won overwhelmingly…

…despite opposition from a young delegate who was quite an effective speaker.  While the delegation had a positive view of the young person, there was wide-spread satisfaction with McCloskey’s hard work over the past two years.

The race for State Chair among Senate District 5 delegates was much closer, with Cindy Asche coming out on top, approximately 60-40 percent.  As it turns out, though, she won only nine senate districts out of a possible 31.

As we would later learn, this have important consequences for the productivity of the day’s meeting.

Most immediately, however, we were entertained by speakers who stopped by to alternately inform and pander to the group of die-hard Republicans.  These speakers included  Lt. Gov. Dan Patrick… 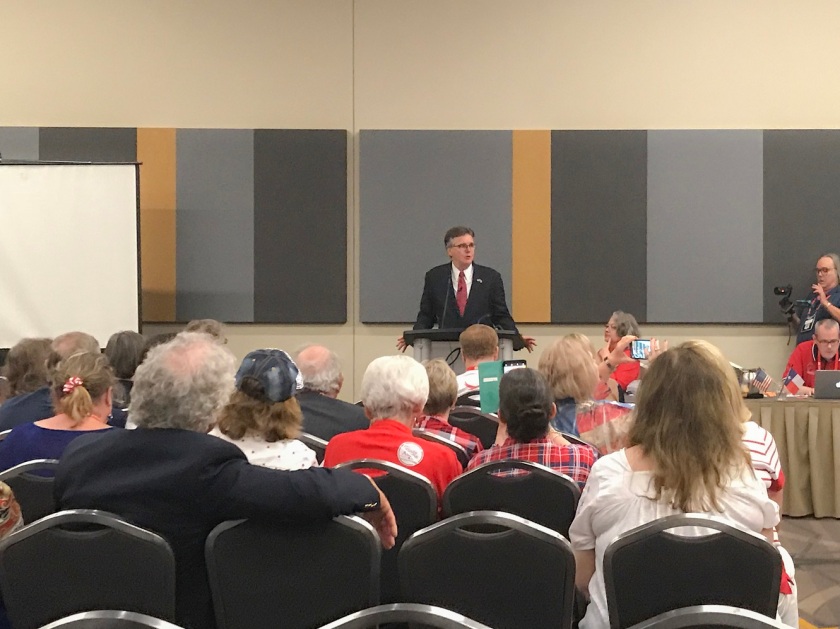 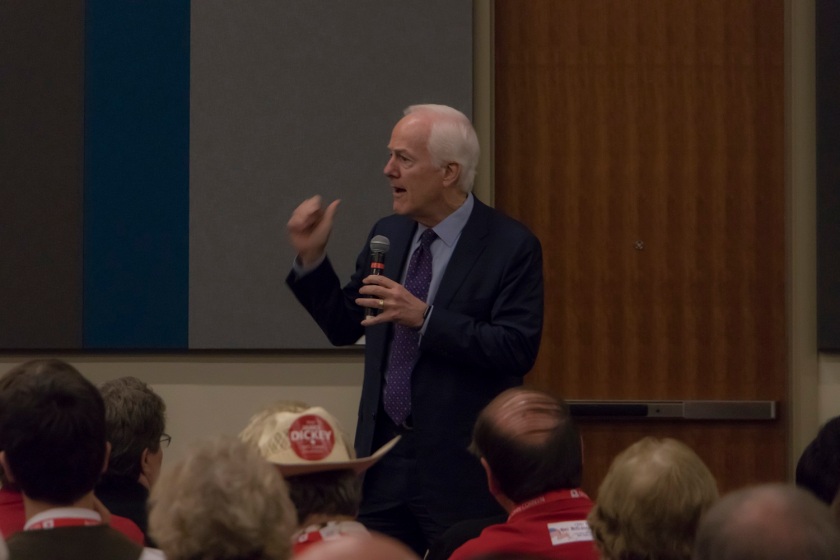 …and Texas Senator Charles Scwhertner, who graciously recognized his long-time Chief of Staff, Tom Holloway, who will be leaving the Texas Senate later this year. 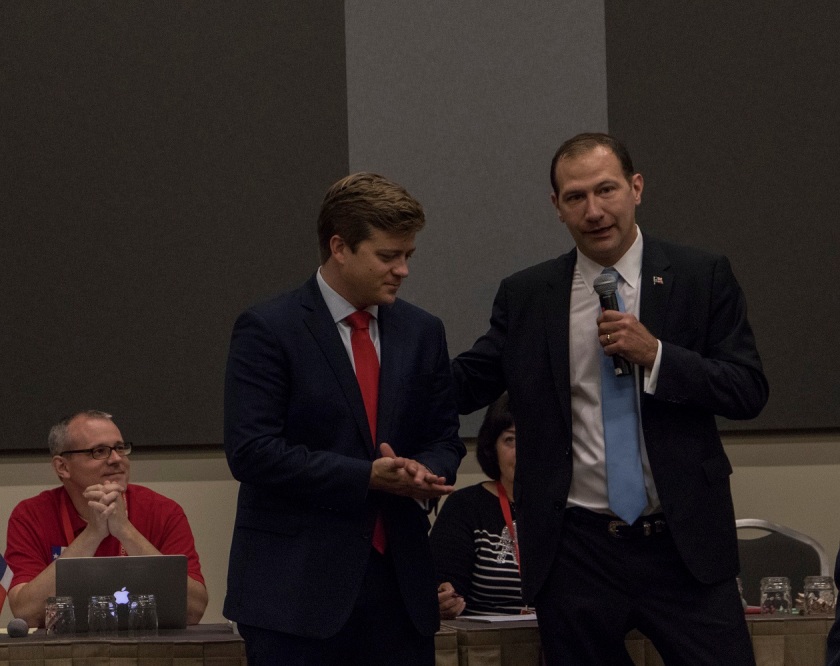 With the conclusion of the business and speeches, our Senate District meetings were complete.  The afternoon business of electing a Chair and selecting the platform was before us.

But first, our delegation took a moment to honor Ila Martinez, who passed away earlier this year after a life serving her community and the party.  She had hoped to make it to one more state convention, but her failing health prevented her from adding to her impressive total of 11 state convention appearances.

Shortly before this year’s convention, however, her son and daughter (Russell Martinez and Andrea Scott) met with Terry Stivers and Linda McKenzie and asked them to wear Ila’s scarves at the convention, so that she could be present one more time, at least in spirit.  And she was.

The delegates were then treated to a series of speeches by leading Texas officials, including Governor Greg Abbott, who was literally introduced with fireworks…

…and then proceeded to go longer than his allotted time…

Not to be outdone, Lt. Governor Dan Patrick also went long, which was doubly tough because his long speech resulted in an (1) abbreviated lunch hour for the delegates and (2) his material was pretty much the same as what he told the senate districts earlier in the day…

The afternoon brought some less strident speakers.  Railroad Chair Christi Craddick gave a fine speech, one that attempted to focus on achievable and positive results…. 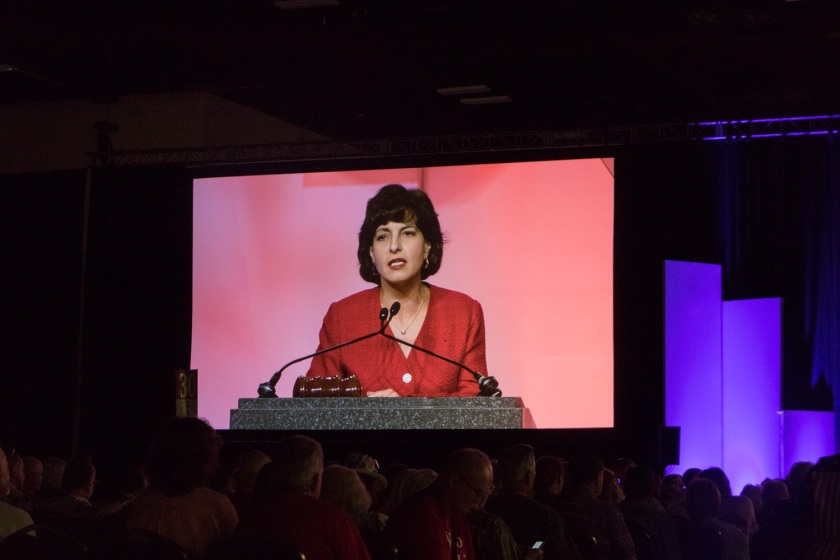 …Land Commissioner George P. Bush was met with boos (presumably over some of delegates’ perceptions of what he is trying to do with the Alamo), but forged on stolidly… 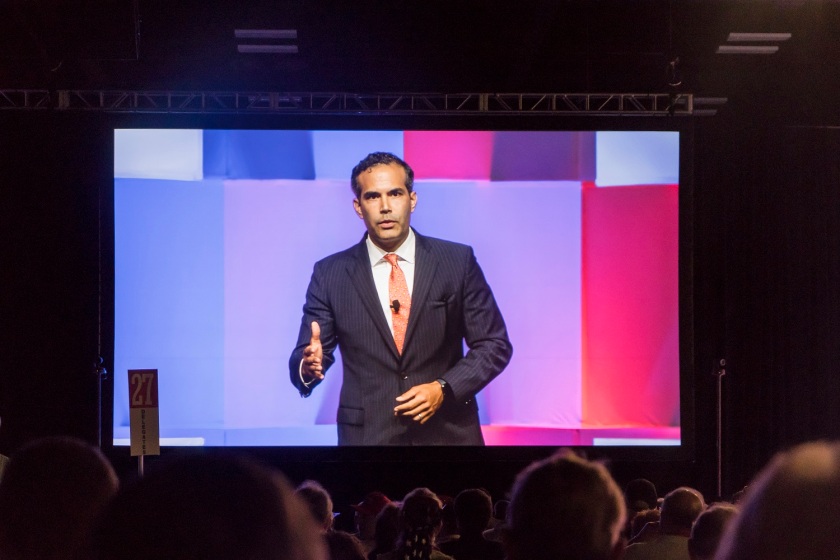 …And Senator John Cornyn gave a no-nonsense speech, introduced by a funny “Big John, Big Don” speech that highlighted the relationship between Cornyn and Trump to Jimmy Dean’s “Big John.”

Also in the category of outfits, we found this character, who won for “unique costume,” and good-naturedly allowed us to take his photo.

The afternoon was not as uplifting, but it was interesting.

Asche, having received more than 20 percent of the Senate Delegations, was given the opportunity to bring her fight for chair to the convention floor, and she did, with fireworks.

As people rose for points of order and interruption motions and other items difficult for newcomers to follow, the RPT Accountant announced her resignation from the floor.  She attempted to explain why she resigned–apparently a protest of incumbent Chair James Dickey’s “honesty”–but was cut off by the acting Chair (Vice Chair Amy Clark, who did a wonderful job holding the gavel during a difficult period) for being out of order.

When it was her turn to speak, Asche pleaded for an opportunity to explain her positions and to provide context to the Accountant’s resignation, but she was met with boos from the audience, many of whom perceived this three-hour floor fight as a dilatory measure.

In the end, Asche’s time ran out, and there was an awkward impasse, as the acting Chair and other officials weren’t sure how vigorously to enforce the time expiration.

In the end, Dickey won by a pretty wide margin–wider than earlier in the day.  He made a short speech, urging everyone to unite.

Perhaps prudently, he concluded that the delegates were not up for an additional fight over the platform, so he invited motions to adjourn, which was approved overwhelmingly.  It was a welcome respite after a long day, but it would make for a nearly impossible workload on Saturday, when we will have to complete Saturday’s workload and a good portion of Friday’s workload as well.

But, as we know, anything is possible in Texas, and we’re sure we’ll manage to get the work done, while also having a good time.