The LEAP Center has embarked on trips to more than a dozen National Parks, and while these parks have been across the US, we’ve never visited Guadalupe Mountain National Park, which is located in far west Texas.

The Park isn’t the most spectacular destination in the National Park system, but it does contain a unique ecosystem as well as the tallest peak in Texas.  Guadalupe Peak, sometimes known as Signal Peak, stands 8,751 feet tall.  Granted, that’s not that tall as far as mountains go, but it’s what we’ve got.

More spectacular than Guadalupe Peak, however, is “El Capitan,” a remarkable sheer bluff adjacent to its taller peak.  What El Capitan lacks in height, however, it makes up for in its photogenic qualities.

While we stopped for photos of both, we hiked neither.  The “top of Texas” hike is about 11 miles, and with only a few hours, such a time-eating hike was not on the agenda.  Rather, we decided to explore the five-mile hike to and from “Devil’s Hall.”

It should be noted that although this hike is listed in the Park’s literature as a 4.2 mile hike, the round trip showed up as about 5.3 miles, according to our fitbits.

The trail begins alongside a creek and, after about a mile, the trail merges with the creek.  The literature describes this as a “tough” hike consisting of crawling over rocks, which is a bit of an exaggeration.  It’s essentially walking through a pebbly, rocky, and occasionally boulder-y creek, and that does sometime involve scooting up rocks or diverting to avoid steeper climbs, but it’s not a difficult trek.  Although we did get fitbit credit for “climbing” 65 floors, the elevation increasee is gradual and occurs early on, and we never felt winded.

The limited elevation also means there are few overlooks.  We managed to see some nice views along the trail, occasionally climbing on boulders to get a better view, it’s mostly a pleasant hike alongside a large-ish yet dry creek or a very, very small “canyon.”

The payoff comes after 2 miles, when the persistent trekkers arrive at the “hiker’s staircase.”  While it was dry when we arrived, it was still a very interesting formation, resembling a staircase carved out by a skilled craftsman.

In actuality, it’s a staircase for a modest waterfall, with a tank at the bottom for the water to pool when its fall was complete.

It is over this staircase that hikers must continue to arrive at Devil’s Hall, which is another 250 yards or so.  The Hall itself is around a corner, so visitors are on it before they realize.  There is a helpful sign for the confused hiker. 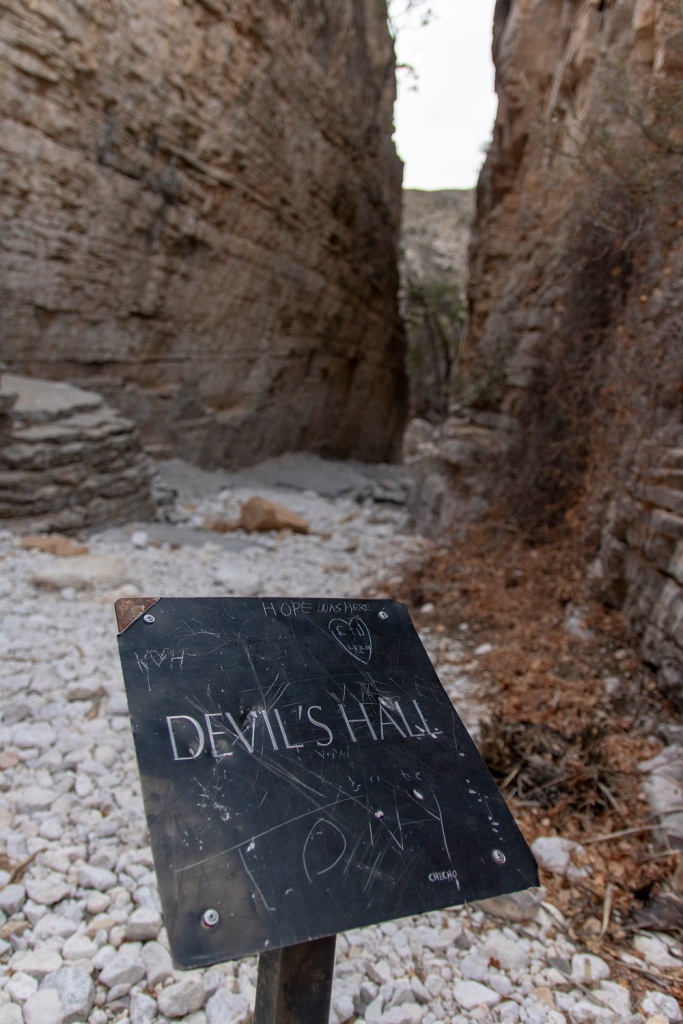 While not as narrow as many of the parks to which we’ve traveled, the Hall is a picturesque pass, and it offers the hiker a sense of completion.

While the Park is inhabited by javelina, elk, deer, eagles, gray fox, coyote, cougars, falcons, and eagles, we saw little of these.  We saw a hungry and lonely deer….

…and we heard two birds, without seeing them (we did see a hawk while driving into the Park).

This modest incursion into Guadalupe Mountain National Park was a pleasant introduction to one of the more isolated parks in the lower 48.

Our hope is to return within the year to hike to the “top of Texas,” but, first, we have planned trips to the Great Smoky Mountains National Park and Shenandoah National Park, and, for now, this introductory teaser will have to tide us over.