The LEAP Ambassadors and Friends had a once in a lifetime opportunity to see three vice presidents in one day. With the planning of the Bush School and Scowcroft Foundation, vice presidents Mike Pence, Vice Presidents Dick Cheney, and Dan Quayle were planned to host an event outlining the significance of the vice presidency. It was also a historical moment because the Presidential Library Foundation was renamed to George and Barbara Bush Foundation. Upon arrival, we could see the heavy presence of security. We were screened by the secret service and then proceeded into the Annenberg Presidential Conference Center. We also saw Chuck Norris. 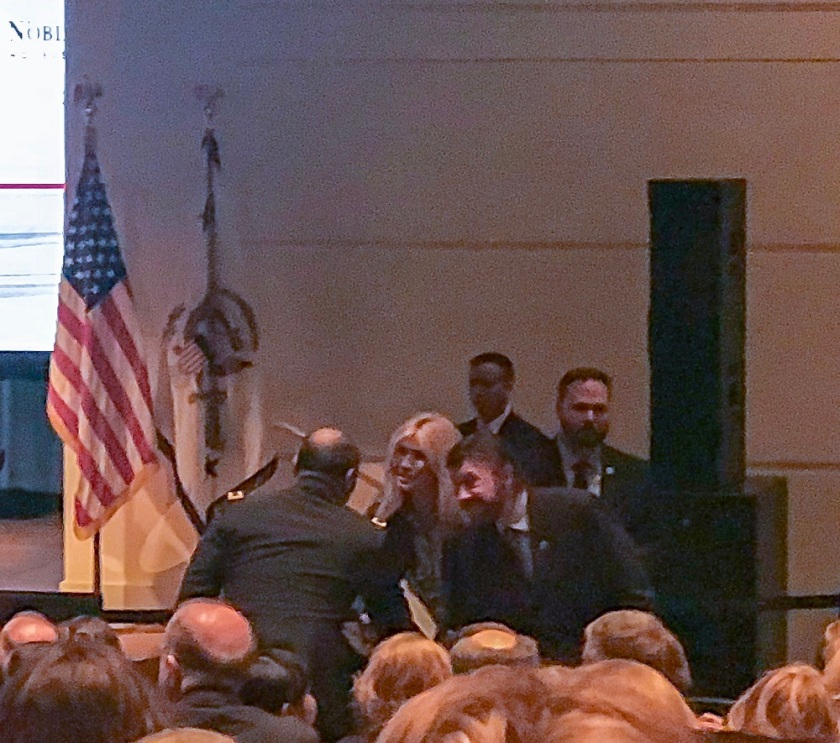 The event started with a warm Aggie welcome and some introductions.

First, the announcement was made that the many foundations and charities that George and Barbara Bush had founded and oversaw would now be under the umbrella of the George and Barbara Bush Foundation, which is the new name that has been given to what was formerly the George H. W. Bush Library Foundation. This received many cheers and much applause.

Vice President Mike Pence spoke first and shared his experiences in public service and included that he draws heavily from George H.W. Bush and is proud to serve as Vice President of our great nation. 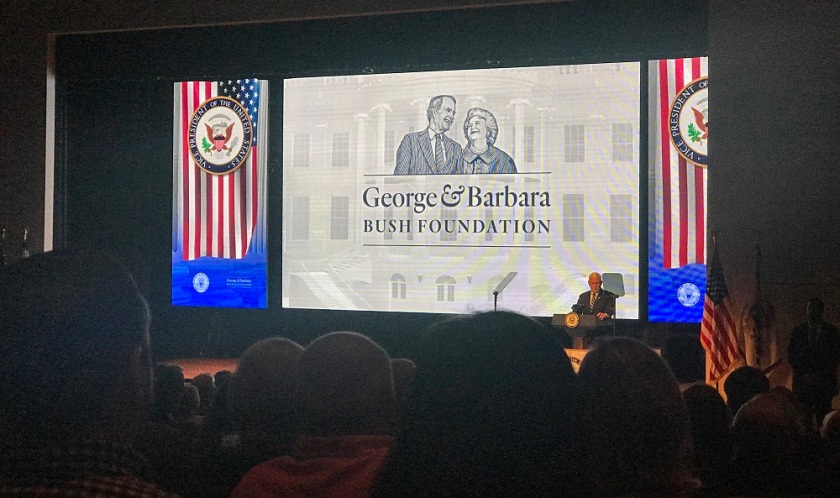 Before the panel, he and his wife, along with Cheney and Quayle, had gone and paid their respects to George and Barbara at their gravesite that they share with their daughter Robin. They had brought lilies from a bush that George and Barbara had planted at the Vice-President’s residence when they lived there.

We saw a sneak peek of the documentary “President in Waiting” by Jefferey Roth which documents the role of the office of the Vice Presidency, and the relationship between the President and Vice-President. 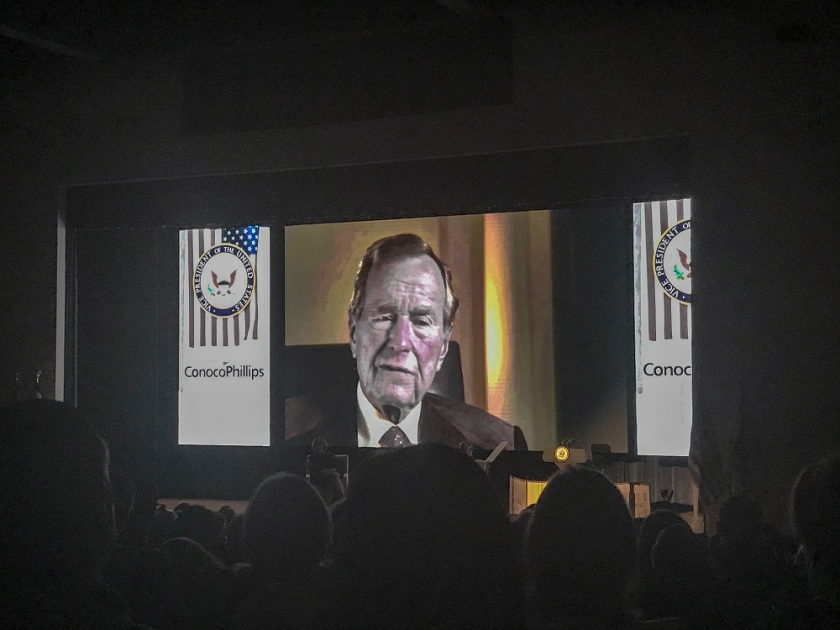 Then followed a discussion with Cheney and Quayle as they shared their memories from their time as Vice Presidents.

Cheney recalled what it was like to be Vice-President during 9/11. He recounted that he was in his office in the West Wing when the first plane hit the World Trade Center, and he was quickly evacuated to the bunker under the White House.

Quayle talked about his time spent with George H.W Bush and what a kind and giving President he had been. 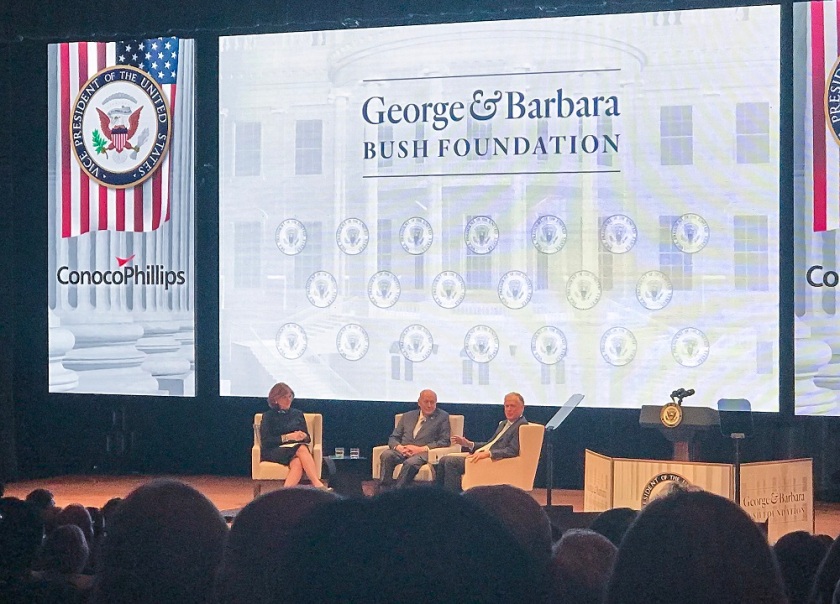 Finally, in a touching tribute to the late President George H.W Bush, we heard a special recording that he made and left to his children. There was hardly a dry eye in the room afterwards.

We dallied in the lobby of the convention center and were pleased to see many faces that were familiar to us. We saw Jean Becker, who was kind enough to set up a tour of the former President’s Houston area office for us in February, and who had just been named as a board member to the newly named Foundation! Congratulations Ms. Becker! We were also able to speak with Ambassador Chase Untermeyer, who came and spoke to a group of our students earlier in the semester. He was kind enough to pose for a quick photo with us before we all had to head out. 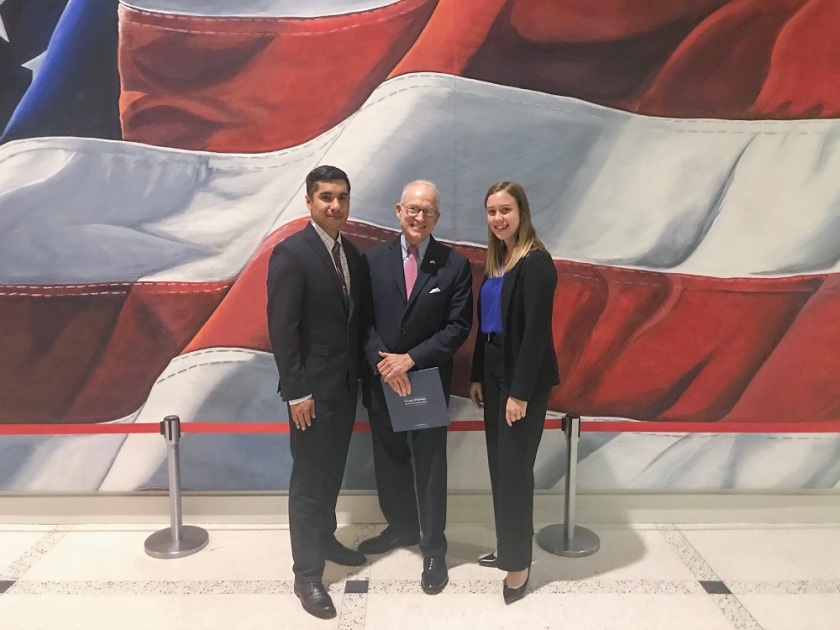 After the event, we went to Taz Indian Cuisine in College Station and sampled some of the fare. We tried a crispy bread made from lentils, and some sweet and spicy sauces. Victoria had the Goat Biriyani which is goat and basmati rice with herbs and spices. Francisco had the Chicken Tandoori, a dish made with chicken marinated in yogurt and spices and then cooked in a clay oven called a tandoor.

Stephanie tried the Masala Dosa, a sort of crepe made from rice batter and lentils, and stuffed with onions, potatoes, and other spices. Everything was so good that we were stuffed by the time dessert was offered. Luckily the Gulab Jamun didn’t come in a very large serving, but it was still so delicious!