For the past 12 years, the LEAP Ambassadors have partnered with the Huntsville Public Library to serve immigrants by assisting them in their quest to become naturalized.  Over that time period, we’ve worked with approximately 300 immigrants from 23 countries.

The program is divided into five weeks, with the intern from the Huntsville Public Library (this year: Leo Elizondo, supervised by HPL staff member Mary Kokot).  The first week is primarily going over what the naturalization process involves and an overview of the course.  In weeks 2-4, we cover a historical timeline of the US, addressing the key topics that are asked on the Naturalization Exam. During the final week, we invite immigration attorney Audrey Biggar to speak to the immigrants.

She goes over the legal aspects of citizenship and answers questions.  We also enjoy a meal together on our final week.  It is typically the most fun.

This year’s program was a bit smaller than most, but we had a good group of immigrants and volunteers.

In fact, almost all of the immigrants are ready to take the test, and one of the participants, Warner Pallasch, took his Naturalization Test three days after the final day of our citizenship program, and he passed!  Congratulations Werner! 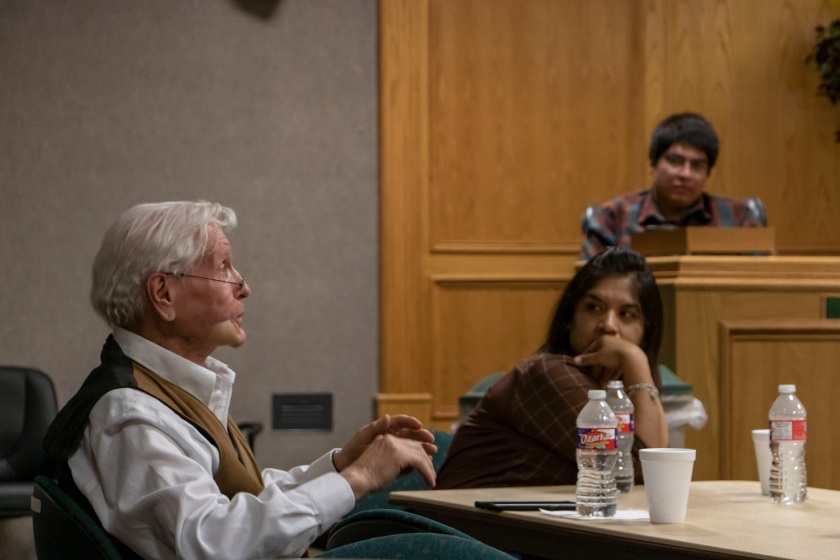 Most of the others have submitted their applications, and it’s just a matter of knowing the material, knowing the process…

…and waiting for the call.  Of late, it’s taken about a year from the time the immigrants pay and submit their applications to the time that they can test.  Three of this year’s participants have already submitted their application.  All of them worked hard this year to make success more likely.

In addition to hearing from Ms. Biggar, the immigrants were also treated to BBQ sandwiches in the spirit of the Independence Day Holiday (they have to know 5-6 holidays for the Civics portion of the Naturalization Exam) and to the presence of Councilmember Dee Howard (thank you!) and last year’s HPL intern, Bianca Saldierna.  Ms. Saldierna was a valuable LEAP Ambassador for two years, and she is now working at Woodforest National Bank as a fraud investigator.

The presence of these two special people made the final week more enjoyable, and we hope was a strong demonstration to the immigrants that they have the support of many people in the community.  Congratulations to Warner, and hopes of future congratulations to all the participants in this year’s program!