One of the services the LEAP Center provides to students is bringing in professional speakers who, in turn, provide education and, in some cases, mentorship to students.  Yesterday, the LEAP Ambassadors brought in Ambassador Chase Untermeyer, who discussed far-flung topics, from basic professionalism to international diplomacy.

Approximately 25 students signed up and showed up for Ambassador Untermeyer’s talk.  Keeping with the LEAP Center’s format and objectives, students were there because they wanted to learn more (not for extra credit), and it was an inter-disciplinary crowd, ranging from CRIJ to CHSS to COFAMC to COBA.  Also on hand were Associate Vice-Provost Chris Maynard, former President James Gaertner, and Professor Peter Roussel.

Ambassador Untemeyer has much experience to draw on when advising students.  His resume includes:

While discussing his career, he incorporated much advice to students.  On selecting jobs, he indicated that students should be willing to work hard and make themselves “very valuable” by working long hours; doing what was required, even if they felt it was “beneath them;” and networking.

Untermeyer emphasized that, often, getting your foot in the door is the most important thing.  Getting the exact job you want can come later.

Untermeyer also emphasized the importance of taking initiative; having a solid foundation of skills, while excelling in at least one particular skill; and writing well–and using those writing skills to send post cards, thank-you notes, or other correspondence to maintain and expand your professional network.

For the last thirty-minutes of the session, students asked questions directly.  One student asked what quality elected officials possess that helps them succeed in their jobs.  Untermeyer’s response: “to be genuinely interested in other people’s lives and interests.”  Another student asked what students should do carve out a career in foreign relations; Untermeyer encouraged students to learn a language, learn a culture other than their own, and expand their experiences.

Mixing humor (“I was a military aide who needed an aide”) with sage advice (“have a goal to what you want to do, and then figure out the logical steps necessary to accomplish the goal”), Untermeyer enjoyed speaking with an engaged audience.

Following the main question-and-answer period, Untermeyer posed for a photo with students….

…and signed books (“How Important People Act“.), while leaving students with a wealth of advice for a successful career. 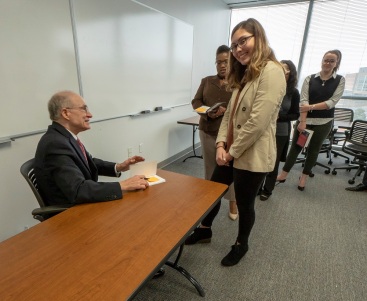 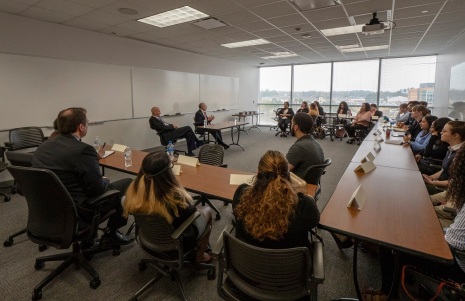 Special thanks to Professor Roussel, Dr. James Gaertner and, especially, Dr. Chris Maynard for being part of the program.