For our second heART of Huntsville session, we were fortunate enough to have a picturesque October evening as the backdrop for our stroll around the downtown square. 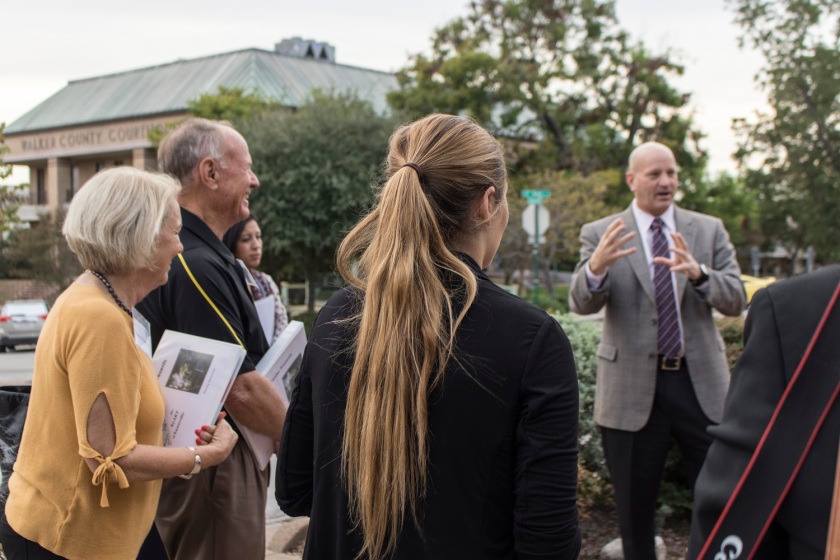 As 6 o’clock approached, we congregated outside the Old Town Theater, which has been putting on shows for the enjoyment of the community since it was established as a non-profit in 1997.

On the outside theatre walls, everyone was drawn to the two Richard Haas murals. One features John Wayne in his movie Paradise Canyon, and the other features Dana Andrews, a Huntsville native, and Gene Tierney in the movie Laura.

Interestingly, we had two special guests for the evening.  Dr. Carl Rollyson has written some 40 books, including a biography of Dana Andrews. 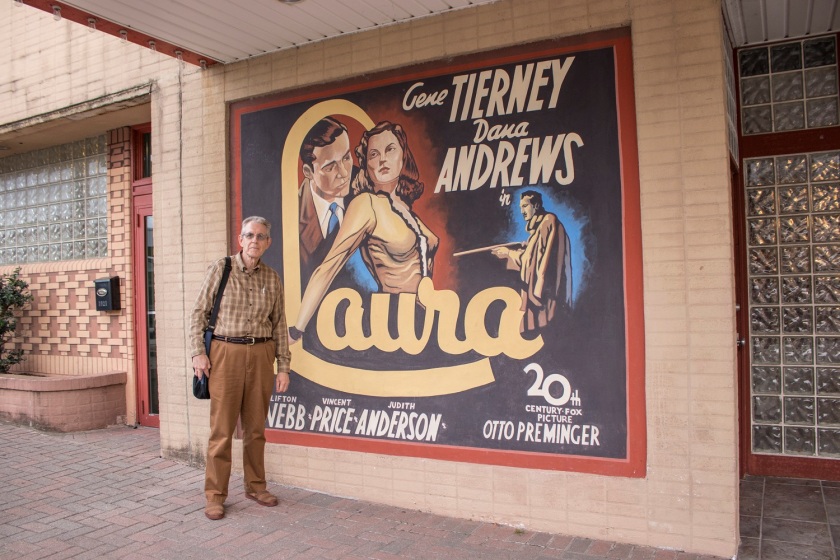 And Glenn Frankel, a Pulitzer Prize winning journalist and author of a book on John Wayne and “The Searchers”, was also on hand for the evening.

We took the opportunity to photograph them with their biographical subjects, and then we embarked on a tour of the theater. 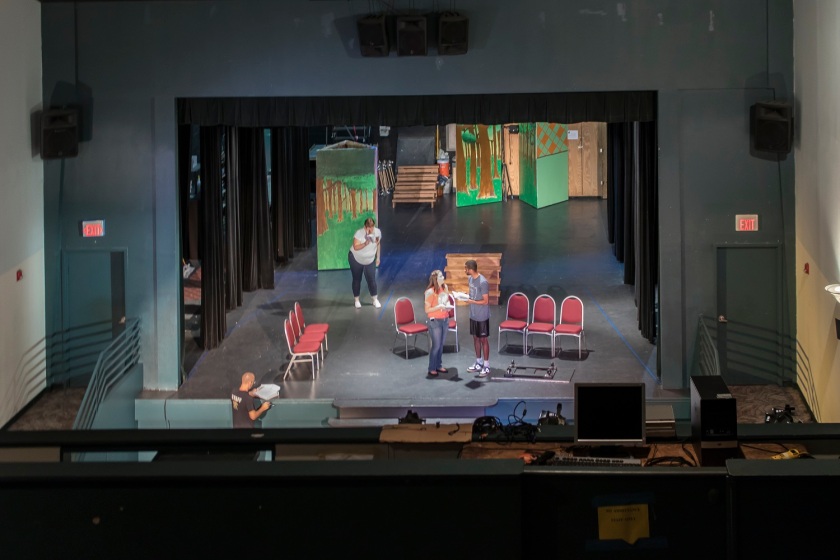 After finishing our tour of the theater, we began to walk the square of downtown where we learned of its history and enjoyed more of Richard Haas murals. Our historic town square is home to the largest collection of trompe l’oeil (trick of the eye) works he’s ever done. If you look closely at the facades of the buildings the next time you are in the area, you will notice that each building has different colors, brick patterns, and even painted on windows to set it apart from the rest. Haas’s art really adds to the small-town charm that is Huntsville’s downtown square.

After taking in the sights of the square we meandered over to First United Methodist Church where we were given a short tour of the sanctuary. 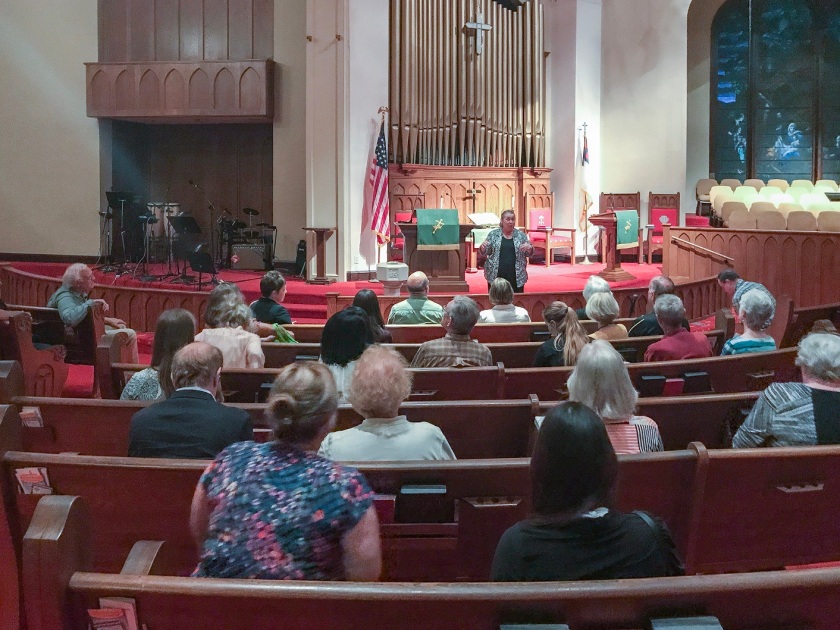 Reverend Willett told us the history behind the gorgeous floor-to-ceiling stained glass windows that are so old they were originally transported by train and wagon to be installed. After the breath-taking view of the glass as the sunlight faded, we were taken downstairs and led through the nursery and the children’s classrooms where local artist Lee Jamison was commissioned to do a series of murals depicting the six days of creation.

The early murals are done in a very abstract style, the first one is reminiscent of Van Gogh’s “Starry Night,” and then they slowly become much more figurative as Mr. Jamison interpreted that the universe and everything else would have a much clearer form. 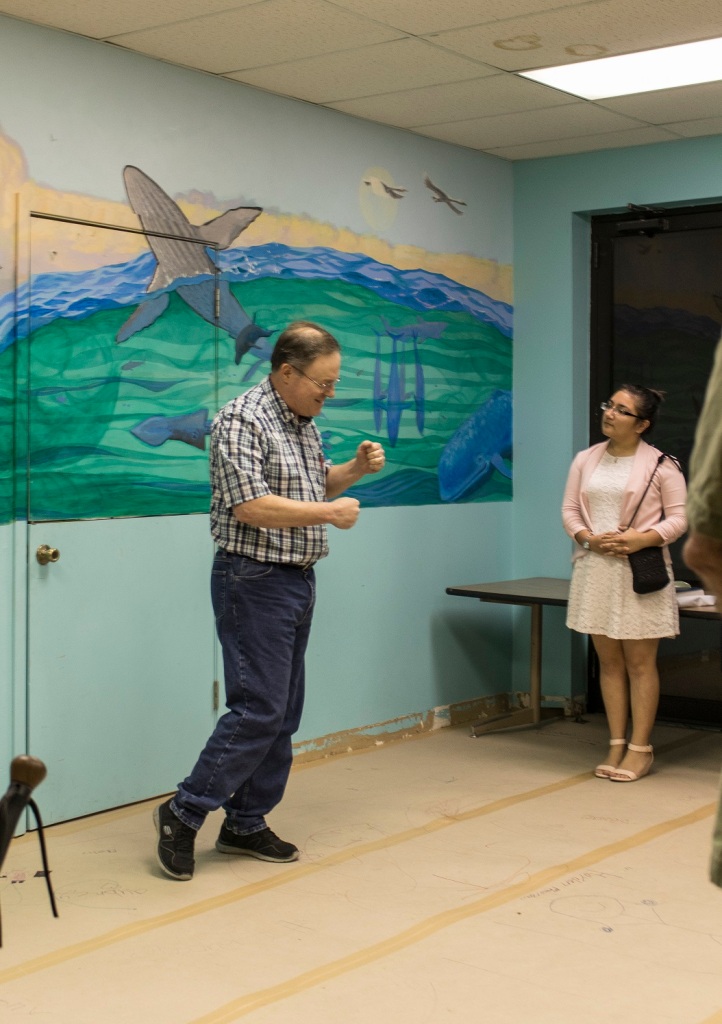 After the tour of the church and the murals, we all thanked Mr. Jamison for taking us through his thought process as he created them, and Reverend Willett for graciously opening the church for us and taking the time to showcase the stain glass windows. As we left the church, we walked about one block over to The Wynne Home Arts Center where the Friends of the Wynne had a delicious spread of pork loin, roasted butternut squash and apples, wild rice, and a dessert of pumpkin cheesecake waiting for us to enjoy. After trekking around town all evening the food was a welcoming sight. Everyone got to know each other better over casual dinner conversation. When dinner was over we each said our goodbyes, and everyone parted ways until next week, when we would meet again for our last night of heART of Huntsville.