After an early start to the day and a brief stint with the car rental company, the LEAP Ambassadors were ready to begin their annual retreat. This time, we set off toward Houston for a fun and enriching weekend-long tour of the city. While our focus was on becoming better ambassadors, there were a few exciting events in the itinerary that we were very much looking forward to.

The LEAP Ambassadors marked the beginning of their retreat with an interesting take on African dining. Peli Peli in the Galleria caters African food with a colonial twist that many of the Ambassadors have never tried before. The dining room has a domed ceiling that is meant to emulate the view from beneath a canopy of trees in the desert and it’s backlit through a pattern of leaves and branches. Its culinary tributaries include English, Dutch, Indian, Portuguese and local indigenous flavors. Ranging from Chicken Espetada (a mango sauce covered chicken), Bobotie (a traditional South African dish, much like shepherd’s pie), kingklip (filleted eel), and many other wonderful dishes. The food that was brought out had different looks to each dish; some on a kabob stick hanging… 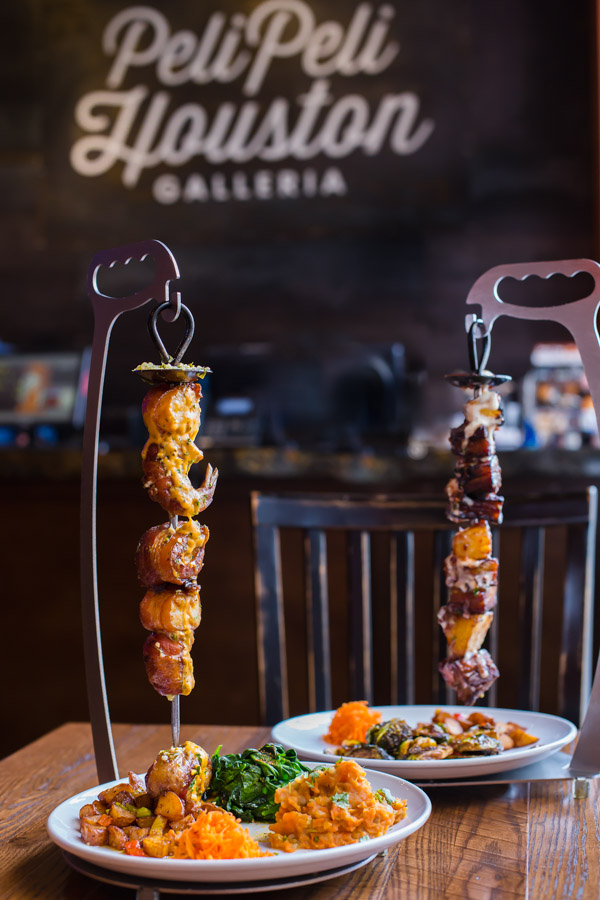 …and some decorated on the plate with unique sauces! While the entire spread was delectable, the kingklip and bobotie was a table favorite. The LEAP Ambassadors also had the pleasure of eating with former Ambassador Bianca and catch us all up on her life since she has graduated. She was able to offer advice and insight into her career in the fraud department at Woodforest National Bank. Her stories about her work made for interesting table talk among us and, before long, the main course was over and out came desert. We ordered the “Desert Trio,” a sampler of chocolate mousse, Melk tart (South African crème brûlée), and sticky toffee pudding. For this, there was no consensus on which dessert was the best.

After lunch, the Ambassadors headed towards Ice at the Galleria, the ice rink that is filled with people year-round. All Ambassadors except Ilexus have ice skated before, but everyone struggled with it, some more than others. 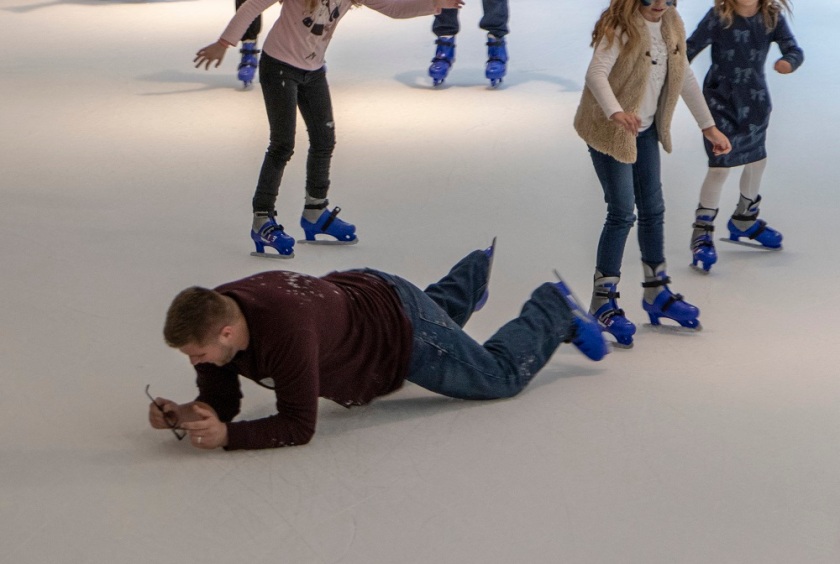 (In fairness, Chase was actually the best of the skaters.) As we gained our balance and our ground… 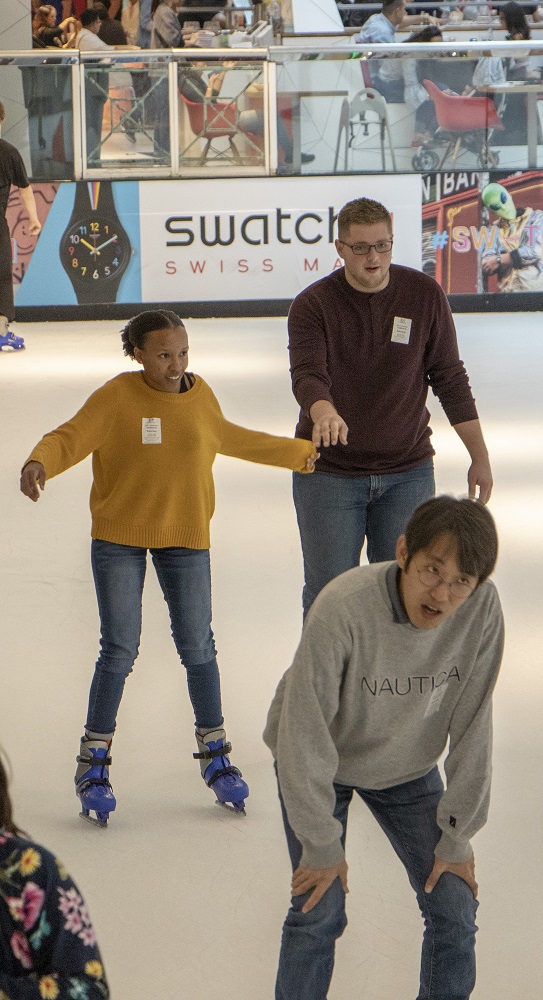 …we eventually enjoyed gliding through the rink and showing off some of our “skills”. 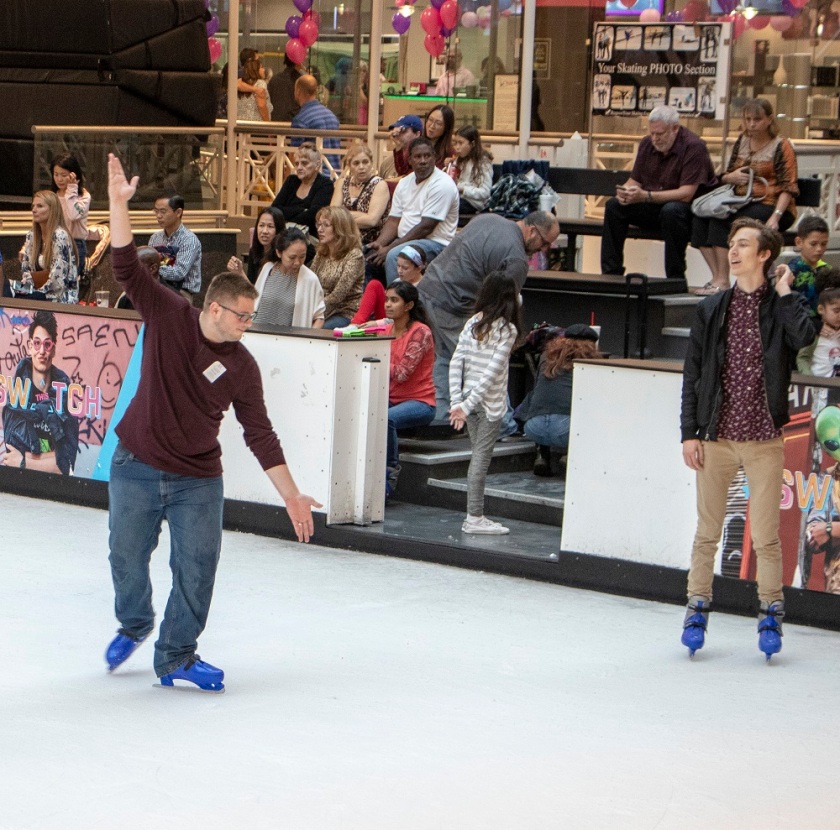 Some guidance and working as a team were required (insert individual pictures of us holding hands and skating) to make sure we didn’t fall.

When we left the rink, we felt a wave of exhaustion rush over us, but the day wasn’t over yet!

After showing off our grace on the ice rink, we made our way to “Murder by The Book”, a local Houston bookstore filled with copious mystery, murder, and crime books.

It is one of the oldest and largest bookstores that specializes in mystery books. After exploring the shelves, we found books that piqued our interest and became captivated in the works of certain authors such as Stephen King and Courtney Summers, while also catching a presentation by author Amy Stewart…. 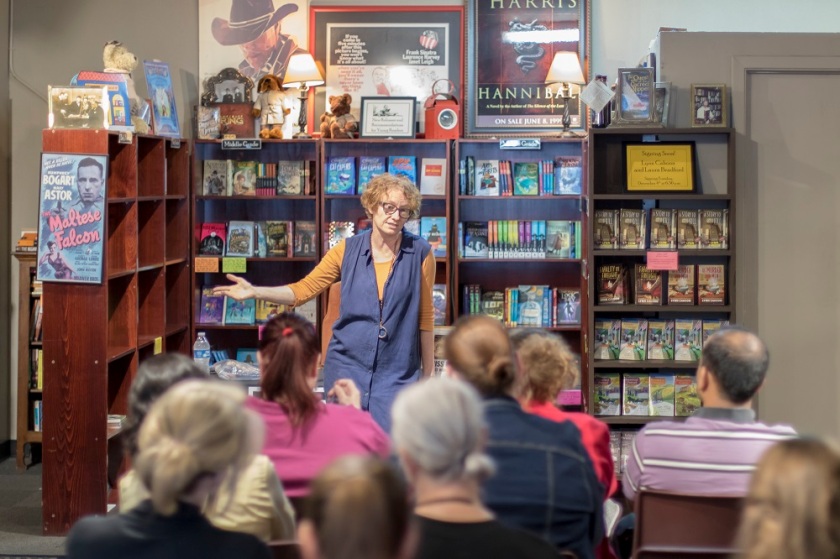 And when we left, we each left with a novel that caught our interest.

For our next stop, we were honored to see the work of one of the most influential American architects, Philip Johnson.  The Chapel of St. Basil, which is located on The University of St. Thomas’ campus, exudes Modern and Post-Modern architecture styles, both of which Johnson is best known for.

Complementing the Chapel is the Felice Babin Gueymard Memorial Garden. This garden is a monument to tranquility and reflection. It’s filled with three fountains that rest behind a labyrinth which is often used for meditation and prayer. Some of us spent many minutes taking the long journey to the center. 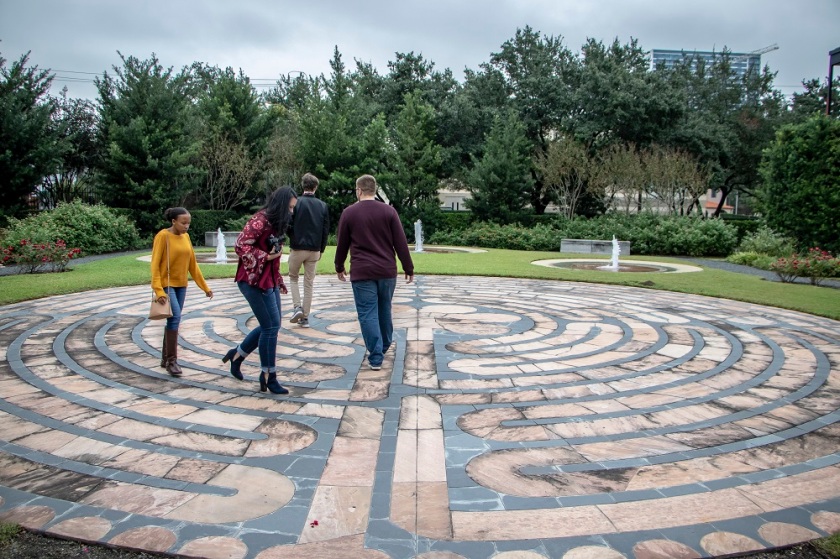 After calming our minds in the Memorial Garden, we headed to the We Heart Houston sculpture by David Adickes – a tribute to the pride resonating from the locals that reside in the massive city.

Last time we visited, it rested along I-10. It has since been moved to the promenade near 8th Wonder Brewery in east Downtown Houston to provide a safer place for picture taking. After what seemed like the fiftieth jump, we finally came out with a decent L.E.A.P picture.

In the same location resides Adickes’ larger than life sculpture of The Beatles. Luckily, it was easier to take a picture with them without having to jump, plus we had Bianca as our photographer, so things came out wonderfully! 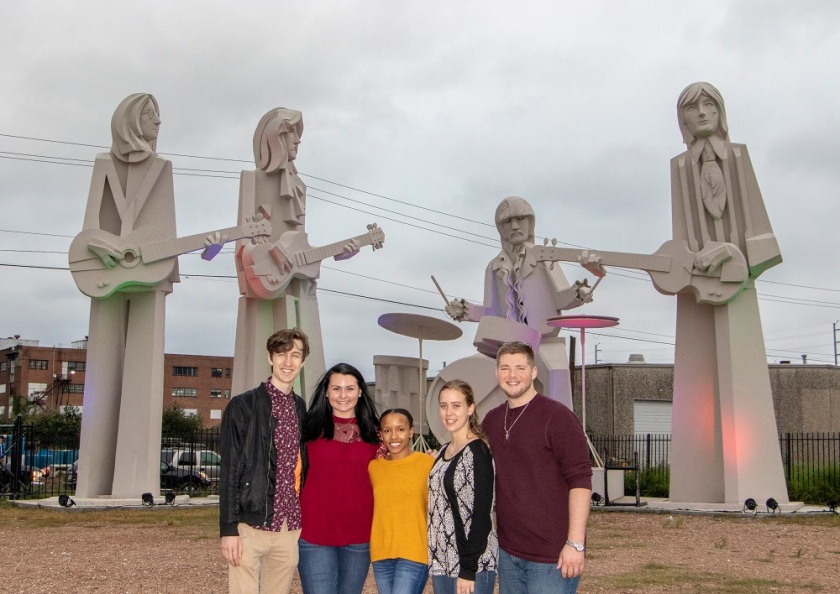 Although many of the LEAP Ambassadors could not name all 4 members, at least they came out with new knowledge to show off to their peers when the time comes.

In order to make it to our final event of the day on time, we had to sacrifice a sit-down meal for the sake of efficiency. Fortunately for us, this provided the alternative of getting delicious smoothies from Nékter Juice Bar – a smoothie chain just around the corner from our hotel in Downtown.

After grabbing our smoothies and changing into more formal clothes, we made our way to the Alley Theater. The Alley Theater opened in 1968 and is now a nationally recognized non-profit theater led by Interim Artistic Director James Black and Managing Director Dean R. Gladden. The showing at the time was Twelfth Night, a comedy written by William Shakespeare around 1601. When we arrived, we took a quick selfie outside and then made our way to our seats. As we walked into the theatre, our excitement grew as we saw the setup of the stage.

There was a big white wall with a staircase leading down. The stage was surrounded by a pool of water with a stone path that bridged the main stage with the outside edge. We could not wait to see how the play would incorporate it. There was a loud crack of lighting and then rain fell from the ceiling into the pool of water around the stage marking the beginning of the play. The next two hours were filled with astonishment, impressiveness, and lots of laughter. It was quite late by the end of the play, so each of the Ambassadors were exhausted, but happy from having seen a great play and having had a great day.

We returned to the hotel and settled into our rooms – excited for day 2 of the retreat. 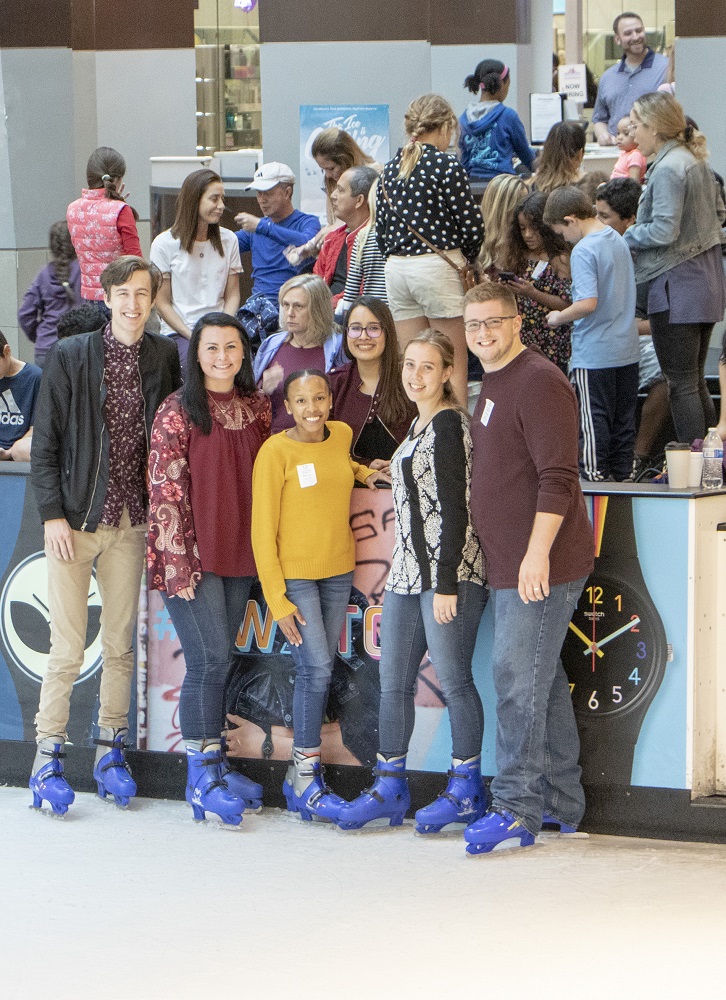