I, and other students involved in the L.E.A.P program, set off on our adventure to Dallas around noon this Friday afternoon, stopping along the way to visit the esteemed Woodbine Hotel for lunch, which is known for making delicious meals slathered in mushrooms. I ordered the alfredo pasta with vegetables, and it was delightful. The mushrooms were all that they had been hyped to be. We set off again after lunch, full and anxious to continue on to Dallas.

We arrived at the JFK 6th Floor Museum and quickly began our tour. We exlored the early campaigning techniques of JFK, focusing partly on how he used his youth to his advantage, as well as having the opportunity to have one the first televised presidential debates. This may have proved decisive, as he won by a small margin.

What I thought was very interesting was learning more about the public works programs he established, specifically the Peace Corps. The Peace Corps is government funded mission work, originally established by JFK to send service people to foreign countries to try and aid in what he hoped would be the eradication of Communism. Eventually JFK decided that these measures alone were not enough and the program was expanded. For me, this was very inspirational and hit close to home, as I hope to one day become involved in the Peace Corps.

Next we ventured on to dinner, and from there to the Dallas Museum of Art. There were many interesting things to be seen here. There was art work by well-known artists such as Picasso to anonymous, cultural artifacts from all over the globe. My favorite exhibit by a wide margin was the African artifacts. I particularly enjoyed seeing and learning about the different types of hats and masks that were worn in Africa…

My favorite was a hat that doubles as a mask…

The Museum also had an African map, designating the location the artifacts were collected. 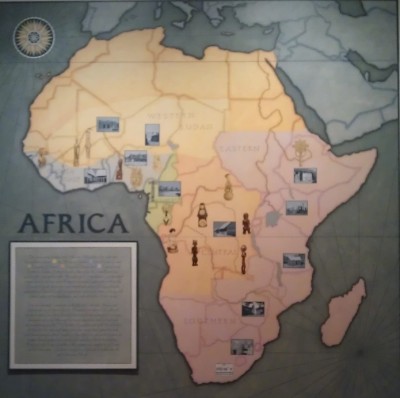 For a freshman who wishes to do volunteer work in Africa as a junior, it was an exciting preview of things to come!  And in that spirit, we left the Museum and headed to the hotel, equally anticipatory of the second day of our trip.