Upon arrival this morning, boot campers were greeted with warm breakfast tacos, fruit, homemade granola, yogurt, and coffee to start the second day of NPF’s Campaign Bootcamp. It was a great start to a fourteen-hour day, filled with learning about all manner of campaign topics.

Chris Perkins & Polling
The first presentation of the day was centered on polling and how to use it to your advantage within a campaign. The speaker, Chris Perkins, partner at Wilson Perkins Allen Opinion Research and an expert on quantitative and qualitative analysis, presented helpful guidelines to think about when managing a real campaign.

One of his main points throughout the presentation was the importance of targeting: “targeting the right persuadable voters is key to victory, especially if you cannot afford to reach out to everyone.” His close created a seamless intro for the next session, how to craft a campaign message.

That presentation, crafting a campaign message for earned and paid media, was led by veteran media consultant Cynthia Miller, with her spouse Dean Rindy, also a media consultant.

They gave us strategies for effective message delivery and great ways to build a campaign message. We learned the four key rules:

We were also reminded “it’s not what you say, but who you are.” A great way to promote a successful message is by frequency and repetition because it takes the human brain five or more repetitions before it recognizes an important message. After ten repetitions, the human brain has absorbed the message, which is especially applicable for voter contact via mail. All these great tips and strategies will be very useful when strategizing for our campaign presentations tomorrow afternoon. 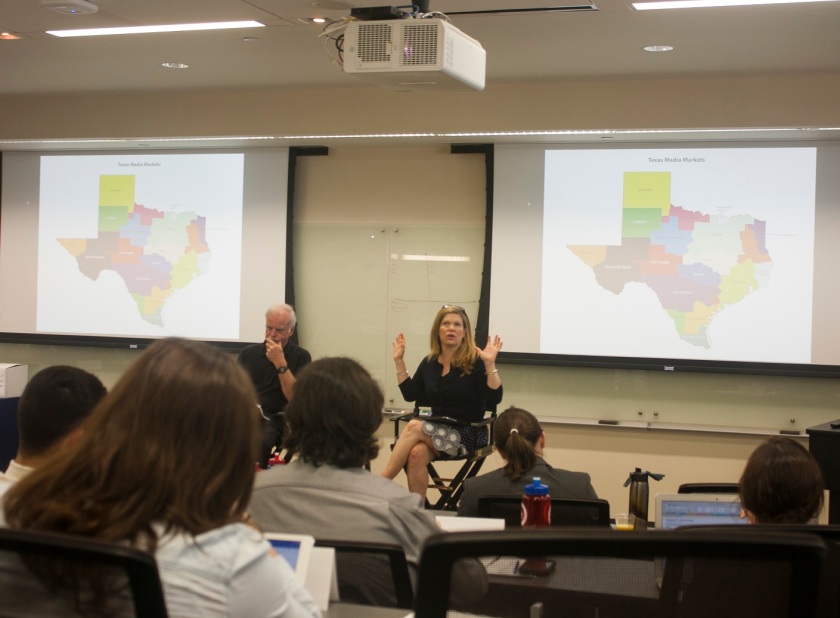 We were then introduced to “The Man Who Invented the Republican Internet,” Vincent Harris. His presentation was filled to the brim with energy and strong delivery.

Harris, CEO of Harris Media, discussed the power of the digital media and the leverage this medium can bring to a party. Facebook, a large part of the digital media, plays a vital role, as do other smaller social media outlets. Currently working on Rand Paul’s bid for President, Harris believes digital media will be one of the deciding factors of the election. The direction and the ever-changing political climate have indicated that the Internet along with digital media will become king in political campaigns. The capabilities with rapid response will make it especially crucial in the end game parts of elections. Sticking to one or two messages makes getting the word out simple and effective, and it worked for us–as we remained engaged in the midst of a long Saturday.

Of course, crafting the message is part of the battle—implementing that message is another part.

“The great thing about the NPF, is that you learn so much, from so many people, in such a short time.”–Constance Gabel, LEAP Center VP

After the break we were introduced to Mathew Brownfield, partner at Murphy Nasica & Associates, and Colleen Loper, campaign director at Annie’s List.

This session focused on teaching us the essentials of targeting, voter contact and voter files, and how to get the most from knocking on doors. Essential information resources for the campaign manager, according to Brownfield and Loper, include the district’s electoral history district census data, and on-the-ground reports. Each mentor then went into specific tools that their party utilizes to narrow their voter targets as quickly and accurately as possible. Loper spoke about the main Democratic tools, which include the Voter Association Network (VAN), DCCC, DND, TDP, Blue Labs and the Analyst’s Institute for research. Brownfield admitted that the Republicans are lacking in this field by only having the GOP data center, but he still gave general research methods such as the state party databases, county party databases and voter files.

The two presenters then explained how important door-to-door campaigning is and how it is much more effective when trying to get out the vote (GOTV), but can be much more time consuming than phone calls. We learned that “knocking on doors” drives turnout and can be an effective method when trying to target moderate voters. Knocking on doors also insulates the campaigns from any change in opinion that the targeted voter might have had. Brownfield also mentioned that block walks during door-to-door campaigning can provide intelligence on the electoral situation of the opposing campaign. The two presenters agreed that the most appealing aspect of door-to-door campaigning is all of the positive media attention that can be earned. We learned that a good strategy when knocking on doors for a campaign is to have the candidate himself or herself knocking on doors as well. The presenters ended by mentioning that the candidate should always show that they are willing to put in work even in the smallest aspects of the campaign and that they can change a targeted voter’s mind easily, especially face-to-face.

Finishing up the day of informative sessions, the energetic communication specialist, Maegan Stephens, focused on political pitches and presentations. 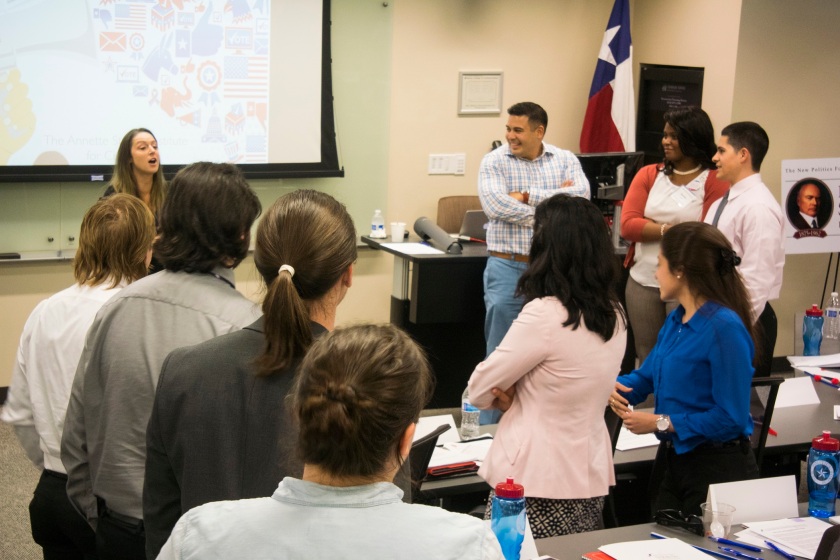 She began by engaging the students in a quick icebreaker, allowing them to move around and tune in.

Throughout this session, Ms. Stephens covered the content, delivery, slide deck, and questions and answers section of a successful presentation as well as the tools to create a political pitch. More specifically, she discussed the three parts of the content: the introduction, strategy, and the conclusion. She also emphasized the importance of delivering a presentation, being conscious of the presenter’s non-verbal and vocal communication. With her help we gained knowledge and confidence beneficial to our upcoming presentations.

Luke Merchant and Matt Glazer, boot camp mentors, wrapped up the day with last-minute details and Q&A regarding the project and presentation…

…followed by a brief overview of tomorrow’s agenda by Drew Galloway who, prior to working for the Annette Strauss Institute, worked for the White House.

While  listening and learning occupied students through most of the day, the evening hours were spent creating mock campaigns… 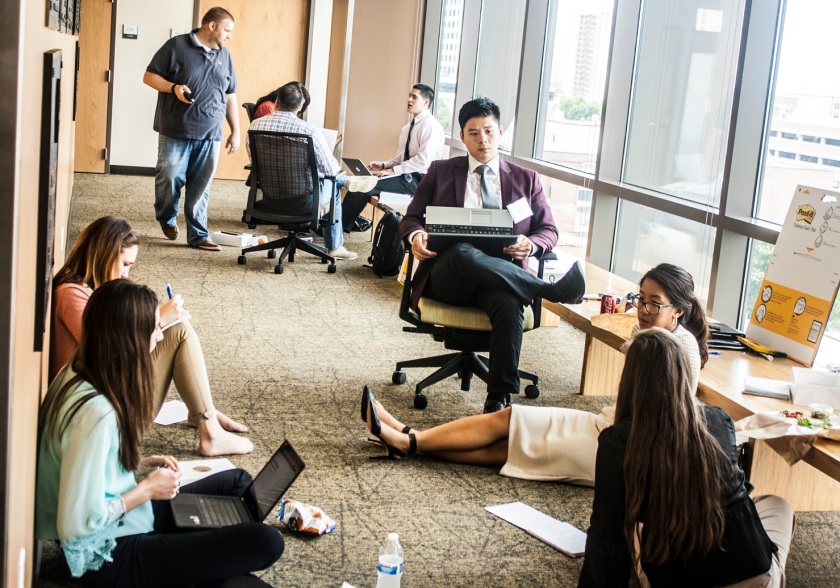 …from real data and hypothetical candidates from House District 117 in San Antonio.

We once again practiced the “working dinner” concept and vigorously tried to get as much as possible done in our teams, with the help of our mentors, Mr. Merchant, Mr. Glazer, Ms. Holden, and Ms. Moore.

Balancing different topics such as budgeting and polling, LEAP Center students tried to recall as much as possible from the previous sessions to create campaigns that would make the mentors proud.

Finally, with work still left to do, we left the campus for the hotel around 10:00pm, for an evening of blogging, research, and presentation practice. Hopefully, some sleep will follow this evening while we look forward to a packed day of presentations tomorrow.