Sunday morning, June 7, 2015,  came extremely early and that meant it was time to hit the road and head to Austin, Texas. It was a nice drive, but nerve wrecking to say the least; mostly because we had no idea what to expect at NEW Leadership Texas (NLT) . We recited facts about the House Bill 5, practiced using our best smiles, and informed one another about all the interesting facts of the keynote speakers that would be speaking in the NLT program. New Leadership Texas is a summer institute that focuses on women in politics and the essential skills that produce success in public service.

We arrived at University of Texas just in time to unpack and head to lunch. Vegetable lasagna, salad, and breadsticks were served along with a selection of cold beverages. During this lunch period we introduced ourselves to our fellow participants. I learned the diverse ages, social classes, cultures, and areas that were being represented here at the summer institute. Although all of us were nervous, the energy that filled the room was great. There were non-stop laughs and conversation.

Directly following lunch we headed back to the Texas Rivers Room for an ice-breaker activity with Ms. Kathy Stanton, a PhD psychology student at the University of Texas. The activities were engaging and required everyone to depart from their comfort zones. This was definitely a time of fun and sentimental value. We opened up about issues we had and also laughed at some. Ms. Stanton did not let us conclude the arguments until we all reached a state of comfort with each other.

Next was the workshop of Effective Presentations and Communications by PhD student, Maegan Stephens, which was interesting because she also presented at our recent New Politics Forum Campaign Bootcamp.  We learned about speeches of introduction and interview pointers. It was in this time that I learned an hour later I’d have to practice what I’ve learned about introductions and introduce Ms. Nancy Bocskor. I was anxious because I was one of the first presenters, but excited to practice what I had just learned. Moreover, it was exciting to me because I had spent significant time with Ms. Bocskor in the spring, when the LEAP Center had brought her to SHSU to speak to students.  I followed up on my existing knowledge of her by briefly interviewing her about the fascinating coaching she’s done regarding women and politics, both, foreign and domestically. The introduction was great and I used everything I learned.

The latter part of the evening consisted of a presentation on Political Texas Women, small group discussions about political issues we face in our communities, and a discussion panel that included various successful women on the topic of leadership. In the discussion panel, one of my favorite quotes from Ms. Mavis Knight. She said, “Leadership is not a title I give to myself, it is given to me by others–which is more rewarding.” This reaffirmed the importance of impacting others, especially through public service. 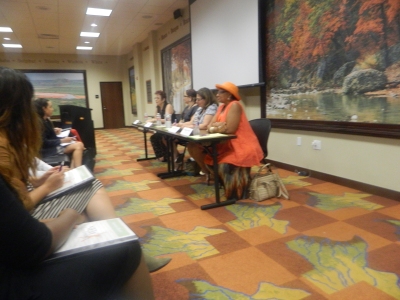 The first day concluded with some ice cream and socializing. It was a “cool” way to end the night with amazing women leaders. It was also a time to reminisce and internalize all of the great tips and information we learned about.

I am excited to see what the coming days will bring and what I will learn.