While many students take weekends off from school and learning opportunities, LEAP students took this Saturday to grow culturally by going to dinner together and attending a play in Houston. We began the evening by dining at a small cafe near our main entertainment for the evening: Cafe Express. The Cafe Express provided us with an abundance of choices ranging from flavorful salads to decadent pastas. I enjoyed their Harvest Salad, which included fresh spinach, strawberries, blueberries, walnuts, feta cheese and delicious strawberry vinaigrette dressing. While conversing about the beginning of school and classes, we got our fill of salads and pastas before the play. It was a wonderful choice as our meal before we headed down to Playhouse 1960 for the showing of “Noises Off”.

Playhouse 1960 is a non-profit community theatre that was founded in 1973 and has since been providing their community with memorable theatre productions.  “Noises Off” was very much a memorable play. The first act made it very clear to the audience that it was a play within a play, and when everyone was focused on watching the stage, we were caught off guard when we heard the voice of the director, Lloyd Dallas, shout from behind our backs. Act One is the actor’s disorganized dress rehearsal, which presented us with ditzy actors missing lines, prop malfunctions and confusion coming from the stage.

It delivered abundant laughter in the audience. The intermission gave everyone a chance to catch their breath from the laughter.

Interestingly, the intermission also gave us the chance to see the stage machinations in action.  Unlike most theaters, much of the scenery changing occurred with open curtains.

Act Two was a behind the scenes look at the matinee performance of “Nothing On”. This act showed the entangled romantic relationships among the cast, which led to many on-stage missteps and misspoken lines. While all of the other characters were caught in their romantic turmoil, Selsdon Mowbray (the burglar with a fondness for alcohol) provided plenty of comedic relief along with the comical actions that were taking place back stage. This act was filled with behind-the-scenes whispering and misunderstandings among the cast while they performed their play. The act ended with a cliffhanger with the announcement of a pregnancy, which left us wanting to know more.

In Act Three, the actors are on their last show of the tour. With all of the relationship mishaps between the actors, we could see the growing tensions. The tensions were resolved with the more rational actors trying their best to tie up the play. Once the play had reached a point of no return, it ended with a quick confusing wedding ceremony. The entirety of “Noises Off” had us laughing until the end. 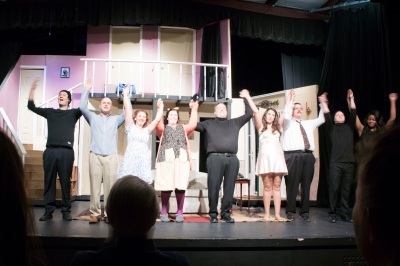 Afterwards we were even able to have our group picture taken with the entire cast!