The afternoon began with Mayor Woodward talking to students about the importance of civic involvement . We learned about his resume as mayor and of the ins and outs of holding the office. Mayor Woodward gave us a good portion of his afternoon to chat and answer questions before his next event. Taking his place, City Secretary Lee Woodward instructed us on city government and how it works. She spoke about the mission of the city, the different positions held by city workers, and what she does, specifically, as city secretary. Students, often coming to Huntsville from Houston where they are not as involved in the local happenings, listened intently, learning of all the opportunities that await them as members of the Huntsville community.

After learning about Huntsville’s Council-Manager system, students engaged in the exercise of the afternoon, acting out a city council meeting as members of the council and mayor. Each student was assigned to a different position, ranging from mayor to city attorney to hospital administrator, and we read from a script and extemporized the happenings of a typical city council meeting, including the proposal of a texting and driving ordinance–a topic of particular interest to college students. 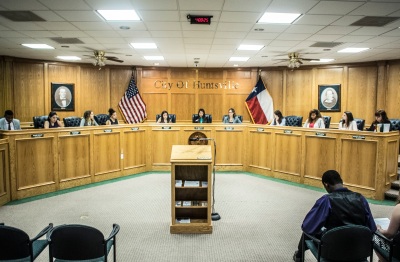 We had the chance to be coached throughout by City Secretary Woodward and Professor Yawn, both of whom have extensive experience in the Tuesday night council meetings. Students acted their parts well for the most part and, in some cases, argued the proposal of the ordinance with the fervor of actual city council members. In all, we acted through two separate council meetings, with each of us switching roles.

Overall, we did pretty well.  One of the most difficult things was adjusting to parliamentary procedure. Another was understanding the various rules under which city governments have to operate.  If nothing else, this was a good exercise to know how hard council members work for virtually no pay ($10 a meeting).

Ending the afternoon, students enjoyed cupcakes from  and chatted about the excitement of being mayor or a councilmember for a few hours. We explored the park behind city hall and saw Charles Pebworth’s “Totem #1.” Inspired to become involved and entrenched in city politics, LEAP students left city hall eager to make a difference in the community. We would like to thank Mayor Woodward and City Secretary Woodward for their hospitality and for hosting LEAP during such an educational afternoon.