It was a fun second week for participants in the LEAP Center’s heART of Huntsville program.  The week involved a behind-the-scenes tour of David Adickes’ “Big Sam” at the Huntsville Visitor Center, a bus tour of the city’s outdoor sculptures, dinner at the new Eclectic Studio, and a wonderful tour of the Adickes’ Foundation.

Jamie Matthews at the Visitor Center offered an informative and welcoming environment for us beginning at 6pm, with snacks and water on hand.  We were treated to a viewing of the short animated feature introducing the building of the Sam Houston Statue (and Sam Houston, the man)… 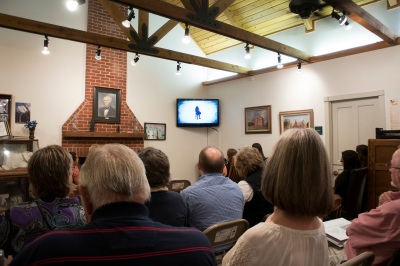 …which was produced by SHSU students in the animation program of the University’s art department. Following the video, we visited the statue, gathered for a group picture….

…and learned cool facts.  Did you know, for example, that there is a door to the interior of the statue, allowing people to climb to the top of Big Sam?

We also had an hour-long bus tour of Huntsville’s outdoor sculptures.  We would bet that most Huntsville residents don’t know the city has more than 30 such sculptures, including work by world-renowned artists such as Charles Pebworth (“Totem Number One” behind City Hall), Jesus Moroles (two outdoor sculptures on SHSU’s campus and four on the Wynne Home grounds), and Pompeo Coppini (Sam Houston’s grave monument)?  While those sculptors may be some of the more famous, there’s also the abstract Christ statue by Brother Melvin Meyer, who completed more than 10,000 sculptures (mostly from recycled materials) before passing away in 2013?  Or that one of Stuart Kraft’s two Huntsville sculptures was lost by Huntsville Independent School District?   Or that John Stewart’s “Reclining Figure” was inspired by the work of Henry Moore, perhaps the greatest 20th Century sculptor?  Or that the seven trees surrounding the “reclining figure” represent the seven astronauts lost in the 1986 Challenger explosion?  And how many people know that architect Harry Payne completed more seven or eight structures in Huntsville (e.g., Smither-Martin law firm, Sam Houston Memorial Museum) that are still standing? The arts are just one of the fun things to explore in Huntsville!

For most of us, our dinner was the first time to visit Eclectic Studio, but the food and the art will be bringing us back for more!

Although normally specializing in vegan and vegetarian fare, the chef (Jennie Dickenson) catered to our meat-eating group with scrumptious ribs, potatoes, pasta salad, and wonderful hummus and chips.

One of our participants, Betsy Maloney, even had some of her art work on the walls, along with art by Lee Jamison and Jennie Dickenson.  We’d like to thank the POLS department at SHSU for sponsoring this week’s activities and dinner!

The highlight of the evening was the tour of the Adickes’ Foundation, the old Huntsville High School on Avenue H.  Containing more than 300 pieces of art by Adickes, it is a wonderful place to spend an evening….

…although, at times, there were so much art to see, we didn’t know which direction to turn! 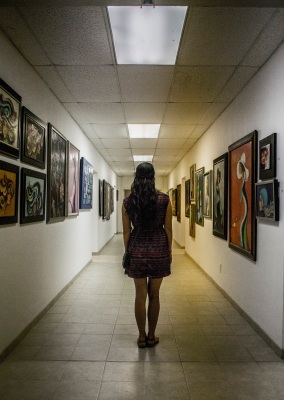 Each of us had our favorite Adickes’ painting, and we made sure we got him in the picture with us, whether it was Karla… 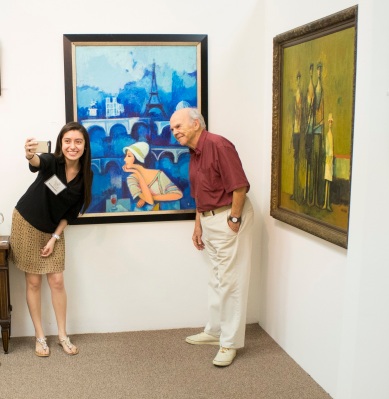 …we all had fun.  Even Ms. Woodward got into the selfie spirit!

But the most successful was a group selfie…

He spent time discussing how he made certain pieces (one he used coffee to get the color right!), of how tapestries were made, or the art that was in Elvis Presley’s home… 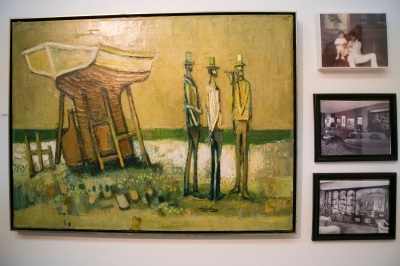 …the stories were as interesting as the art.

And for students who are political science majors, it was a treat to hear about the night he spent in the White House, when he had the privilege of going to the Kennedy Center with George H.W. and Barbara Bush, followed by a night in the Lincoln Bedroom.

It was a fun, educational evening! 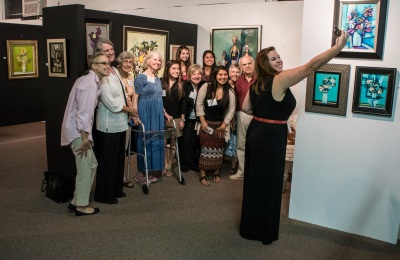