Even as the semester winds to a close, the LEAP Center Ambassadors refuse to slow down.  Indeed, on their first day in school following the Thanksgiving break, the Ambassadors embarked on an educational trifecta, attending three venues to learn about politics, history, nature, and art.

The tour began shortly after the Ambassadors got out of class on Monday, November 30.  From class the students drove to the George H. W. Bush Presidential Library in College Station, Texas, where they learned about World War II, the CIA, China, the United Nations, the fall of the Berlin Wall, and other historical events in which former President Bush was involved.

“My favorite exhibit,” noted senior Austin Campbell, “was the Oval Office, where the political action unfolds.” The students gathered with Campbell for a “presidential conference” in the office, much to the amusement of Museum staff…

…as well as a more formal portrait… 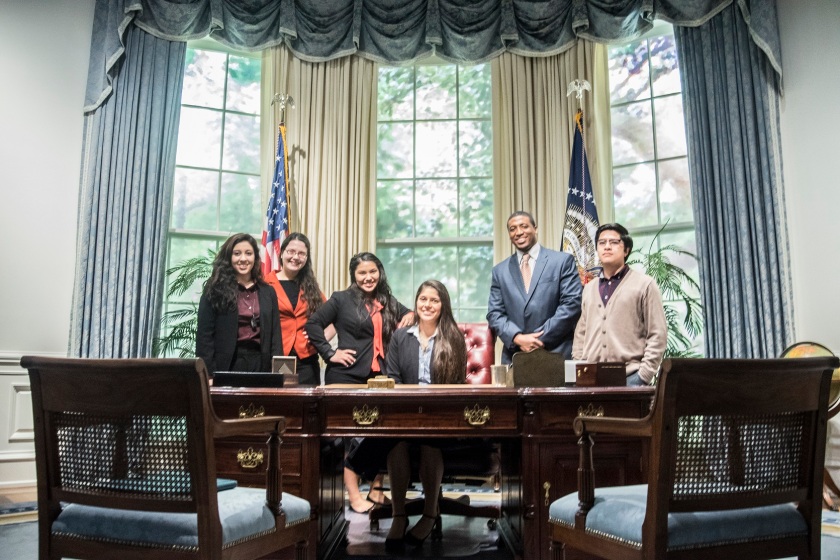 Brian Aldaco, on the other hand, most enjoyed the wing addressing Bush’s move from Yale to Texas. “I enjoyed learning more about his personal qualities and his family, which I think contributed to his success later in life.”

This was also true of Megan Chapa, who enjoyed seeing the wedding exhibit on the Bushes.

The students got a closer view of the seventy-year marriage of George and Barbara Bush hours later, when they sat about 20 feet from the couple for a presentation by Ken Burns and Mark Burns, who came to the Bush Library to discuss the 100th Anniversary of the national park system.

Ken Burns has won two Emmys, two Grammys, a Peabody Award, and has twice been nominated for Academy Awards. He was also the director of “National Parks: America’s Best Idea,” excerpts of which were shown. Burns provided an eloquent defense of the national park system, noting that “In Europe, governments erect cathedrals or palaces, and these ‘monuments’ are often reserved for the national elite. In the United States, we invented the idea of preserving the land for the entire nation. It’s a democratic idea.”

The national parks system was created as part of the Organic Act of 1916, legislation designed “…to conserve the scenery and the natural and historic objects and the wild life therein and to provide for the enjoyment of the same in such manner…as will leave them unimpaired for the enjoyment of future generations.”

This idealistic notion was punctuated by Mark Burns’ (no relation to Ken) photographs, which captured the remarkable beauty of these sites. In fact, Burns is one of only three photographers to photograph all 59 of the US national parks and the only one to photograph them all in black and white.

Burns’ monochromatic photography—evoking Ansel Adams—was on display at the Bush Library alongside paintings by Albert Bierstadt, Thomas Moran, and other painters of the natural world. Enriching the exhibit was the presence of Mark Burns…

…and Ken Burns, whom the students had the opportunity to interact with on the tour of the exhibit.

Campbell, combining politics and the environment, asked Ken Burns whether he had noticed global warming affecting the national parks. “Absolutely,” noted Burns, who went on to observe that it was possible that in a couple of decades, visitors to Montana might come across a sign that says, “the site of the former Waterton-Glacier International Peace Park.”

On this ominous note, the students walked the short distance from the Bush Presidential Museum to the Bush School of Government and Public Service, where they learned about careers—with an emphasis on those that might allow them to influence public policy for the better.

Staff were welcoming, reinforcing the strong relationship that the Bush School has with SHSU. Indeed, the Bush School’s Master’s Program at Texas A&M has more undergraduates from SHSU than any other national university with the exception of TAMU. Some of those former SHSU students are now in the workplace, holding down careers in the state legislature, in management positions for city governments, and even as administrators at SHSU.

It was a lot to take in at the end of the semester, and although only eight hours elapsed on the tour, the students vicariously experienced World War II, the fall of the Berlin Wall, the Persian Gulf War, and the development of the national park system. And, as future public servants, they may also make history—as advisors, legislators, park rangers, or even presidents.