Although it was the first day of Spring Break, LEAP ambassadors were happy to attend 2016 League of United Latin American Citizens (LULAC) Community Amigo Award Scholarship Banquet. Upon arrival, Brian and I were welcomed by John Escobedo, the President of Huntsville LULAC Council.

As we proceeded to take our seats, we found Former Mayor Mac Woodward, Mrs. Woodward, County Judge Pierce, and his wife Mrs. Pierce, and we were invited to join their table.

The program began with the performance of ballet folklorico, the local dance group directed by Anita Escobedo.

While we enjoyed dinner, Mr. Escobedo introduced the special guests of the night. Among those guests were Mayor Brauninger, Former Mayor Woodward, Council member Montgomery, County Judge Pierce, and Attorney Robert Cates, who was also the keynote speaker for the night.

Mr. Cates is an immigration attorney in Conroe who recently graduated from Baylor Law School. During his presentation he focused on educating the audience in the recent immigration reform by President Obama.

The presentation was followed by the awards presentation. We were excited to accept the Educator of the Year Award, which was given to the LEAP Center, largely for its annual “Citizenship Preparatory Course”–which, incidentally, begins tonight! 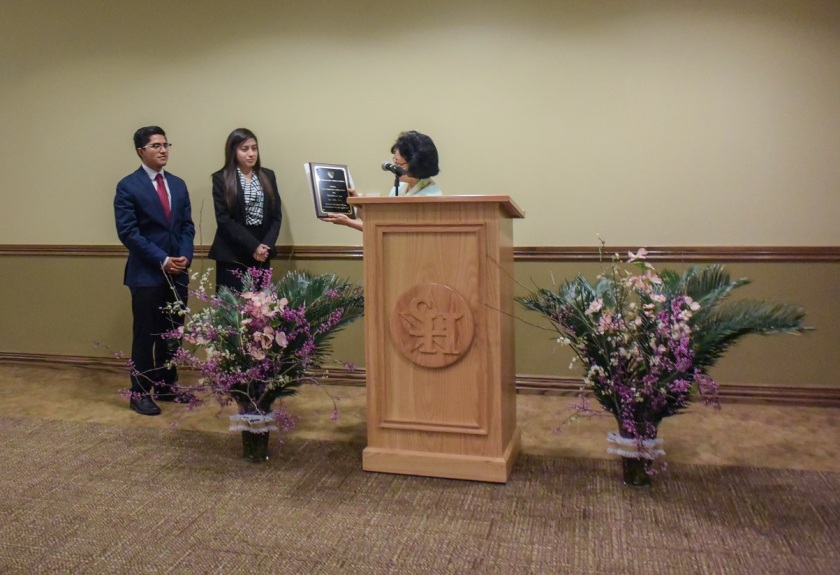 We were also happy to hear that Former Mayor Woodward received the Citizen of the Year Award(his second this year!)…

…and The Walker County Federal Credit Union received Business of the Year Award. In all it was a great event that allowed us to participate with another great organization!