In January I traveled to DC with my fellow LEAPsters to attend the 58th Presidential Inauguration. In the company of good friends, I made trip down the East Coast and through our chaotic Capitol. A month later, I made the trip once more to attend the Campus Women Lead summit. Alone on this trip but thankful for the experience, I hoped to make the most out of my Washington D.C. visit.

Campus Women Lead is a two day leadership summit for women leaders on campuses across the country and is hosted by Running Start, National Campus Leadership Council (NCLC), and Deloitte Consulting. The goal of the summit is to connect and empower women across the country who are leaders on their college campuses. With approximately 75 women in attendance, ten were from Texas and three were from SHSU! 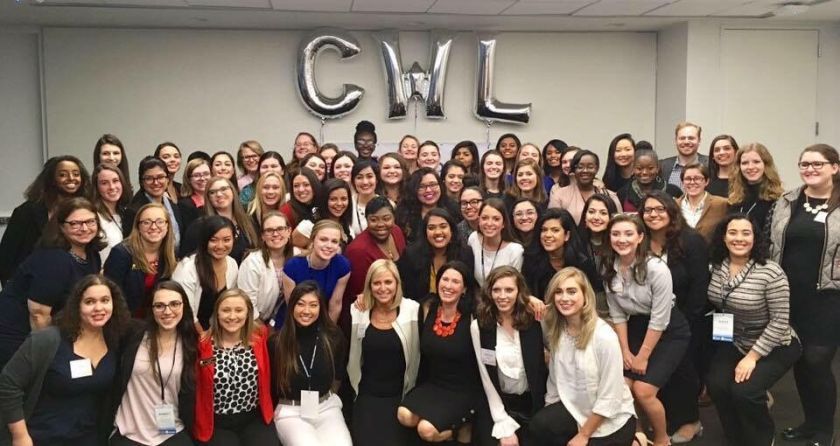 Interestingly, Running Start runs the Star Fellowship. This fellowship is prestigious and only chooses seven women from around the country each semester to participate. This semester Sam Houston has two representatives in the program, Megan Chapa and Jazmin Perez. This is the first time the program has chosen two students from the same University!

The day of my departure, I woke early in the  morning to catch my 6:30 am flight on time. The sun was not up yet and despite my uneasiness about traveling solo to Washington D.C., I was also eager.

When I arrived at the capitol I collected my bags and boarded my hotel’s shuttle (a convenience I was thankful for). Then, I arrived in Crystal City a few miles away from the conference and a short metro ride across the Potomac River into Washington D.C. I took a few moments to get settled, plan my metro ride, and rest before I embarked on my first journey maneuvering the D.C. Metro system. 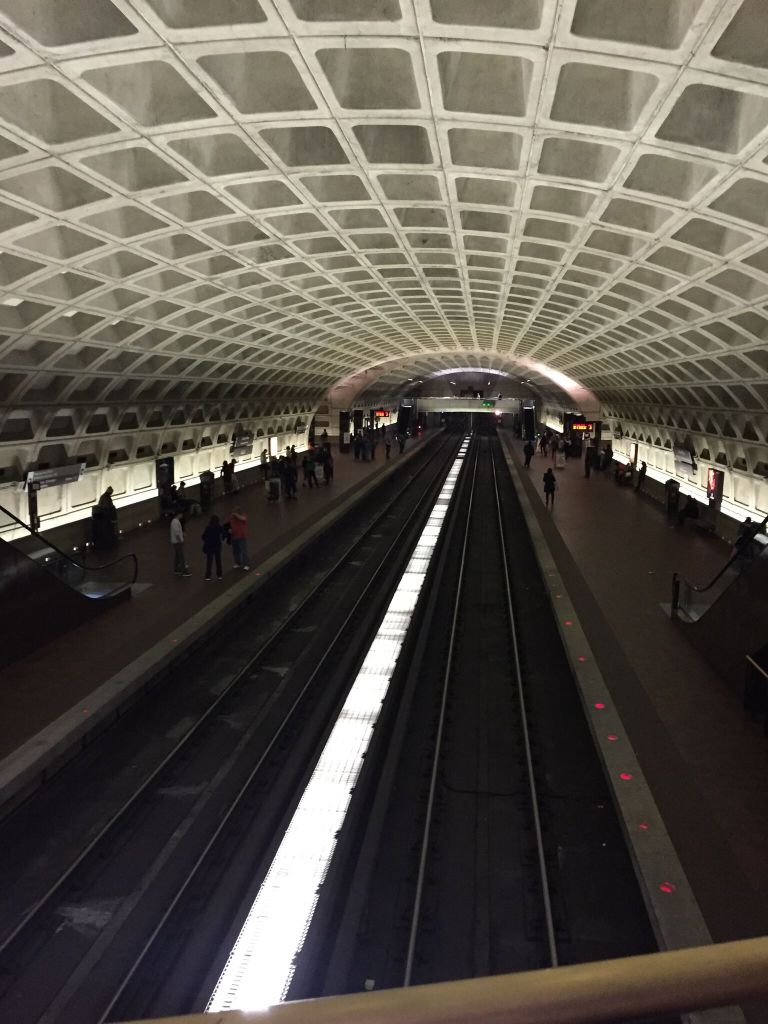 The conference was only three miles away and a few stops down the blue metro line, but to my misfortune, I learned that his line was closed. I met a few helpful passengers along the way that helped explain the system to me. It took over an hour to get to my destination but after a few wrong turns here and there I made it on time.

The first evening of the conference included introductions, networking, and relationship building. We socialized, met women leaders, and were welcomed by Peter Brown, the Managing Director of Federal Government Relations for Deloitte and Melissa Richmond, Vice President of Running Start. Sarah McBride, a former Student Government President at American University, spoke about her experience as a transgender women in politics. She shared her story to welcome the women and stress the fact that we each have a story to tell.

After the introductions, I met many of the student leaders from across the country before heading to enjoy dinner with LEAP Ambassador, Megan Chapa.

I was eager to catch up with Megan as I had not seen her since my previous visit to Washington D.C.. While enjoying a chicken parmesan melt in Cosi, a small café in Arlington, I learned about how much she enjoys the fellowship. Even though I would have loved to stay longer with Megan, I headed back to the hotel to rest in anticipation of a full second day.

After the rattling metro ride back to the conference, I enjoyed a healthy breakfast to start the day. The conference venue was a beautiful, airy room that overlooked the Potomac River and Washington D.C.. All day, I tried to soak in the vista as much as possible.

One of the things I enjoyed the most was meeting other women who could contribute ideas and experiences to help their peer student leaders.

Our first activity of the day was a reflective group discussion that made each participant think about solving issues facing their campus or organization. As a LEAP Ambassador, one of my responsibilities is to try to promote civic engagement and professionalism in my campus. I focused on these two issues and tried to critically think about new ways to engage my fellow SHSU students.

Claire Shipman, Senior National Correspondent for Good Morning America and author of The Confidence Code, discussed how confidence is a key component of success in any career. Her studies have focused on the development of confidence as it relates to genetics and gender. Most importantly, she explained that no matter the circumstances, confidence can always be improved. She encouraged us to think less, act more, and get out of our comfort zones. I observed that these were goals I already strived for and this encouraged me to challenge myself more.

As an Austin intern, it was interesting to attend the advocacy training session which discussed strategy development for special interest groups. I often meet with these type of groups who are advocating for specific policy changes. The discussion taught me more about what goes into building a message, a team, and a strategy. Andy MacCracken, the Co-Founder and Executive Director of NCLC, was very helpful in explaining the process and the effective versus ineffective means of advocacy. 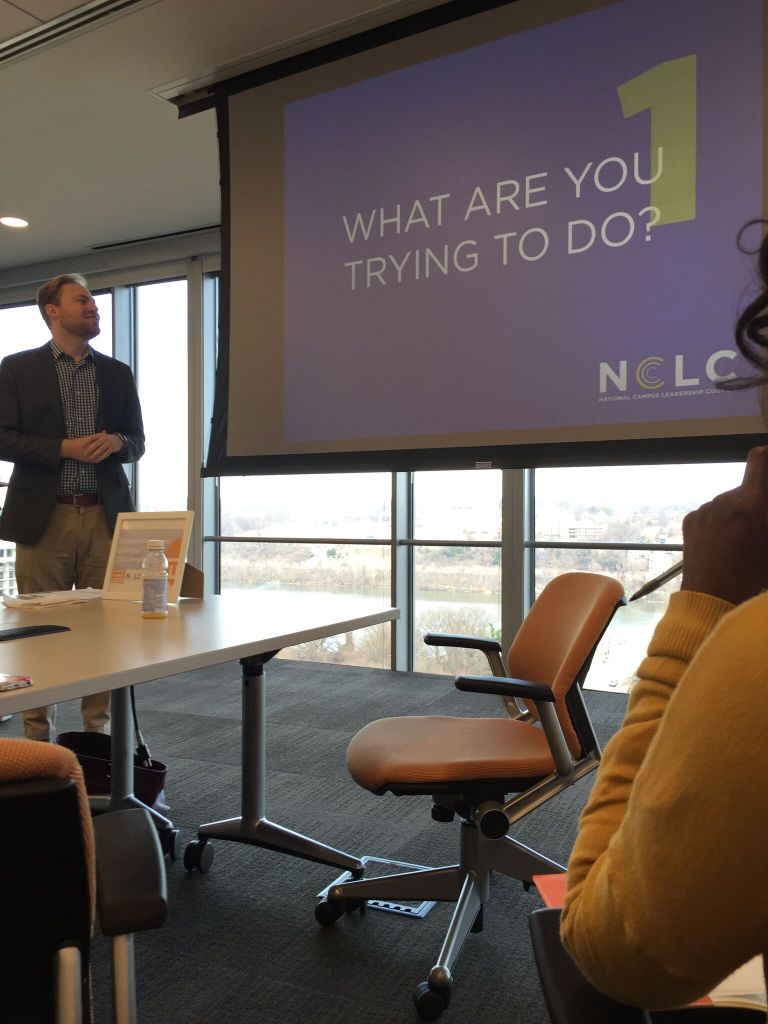 Among the speakers, I was fond of Farah Pandith’s story. Her story took her from facing discrimination as a student in Smith College, to building a good relationship with then First Lady Barbra Bush because of the incident, to later harnessing the relationship to become a Special Representative to Muslim Communities for the US Department of State. She stressed that doing something today doesn’t mean that you have to do it tomorrow or next year. I appreciated her wisdom and encouragement because I thought it was very relatable. Farah was nice enough to take pictures with us and offer individual advice!

It was also enjoyable to hear from a good LEAP friend. When I attended a fundraising session it was a pleasant surprise to see Nancy Bocskor leading the discussion. After raising millions in campaigning, Ms. Bocskor now focuses on empowering young women to run for politics. As always, I enjoyed her witty jokes, engaging stories, and wisdom on fundraising. Not only is her advice applicable for candidates running for office, but also for the non-profit world. 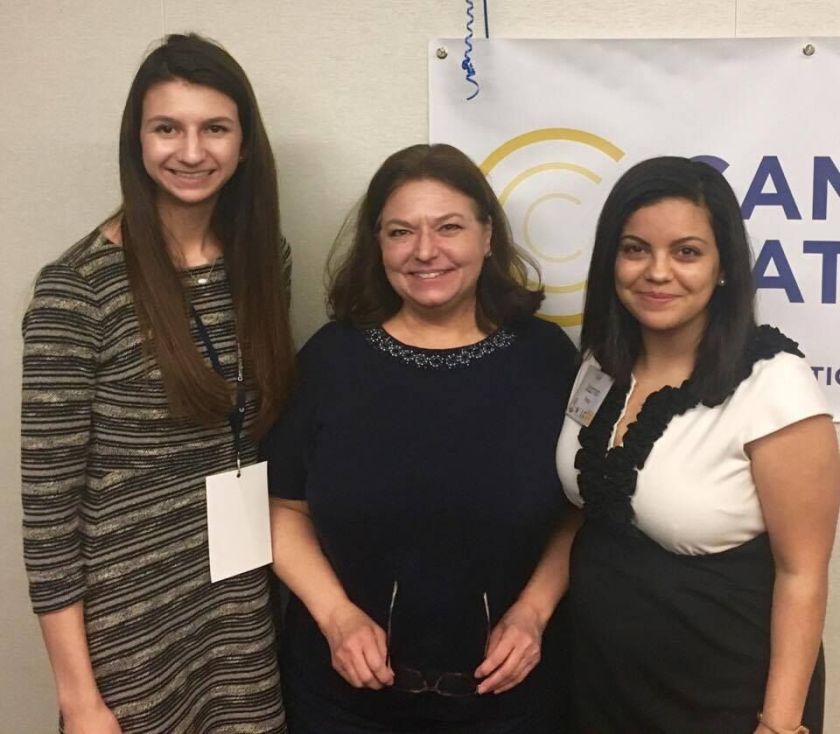 Storytelling was my last workshop of the day and one of my favorites! Within the first two minutes, we were asked to describe our personal “brand” in three words. This activity was a challenge because I had not previously thought about what my brand was. Evaluating myself is sometimes difficult, but also necessary because it helps to keep me accountable for my goals. Thankfully, the session showed me how to best convey my story and gave me a lot to think about in evaluating myself.

We reconvened in the main conference room for our closing announcements and picture. After the constructive and empowering conference ended, I made my way to the National Mall. As something of a Metro expert, I had some confidence as I headed out to explore. My first stop was the White House. I’m sure it is prettier during the day, but the grand home gleamed with the illuminating lawn lights. I reminisced on how many great leaders had lived there and how much history had been made there before moving on the Mall. I visited the World War Two Monument, the Vietnam Women’s Memorial, the Lincoln Memorial… 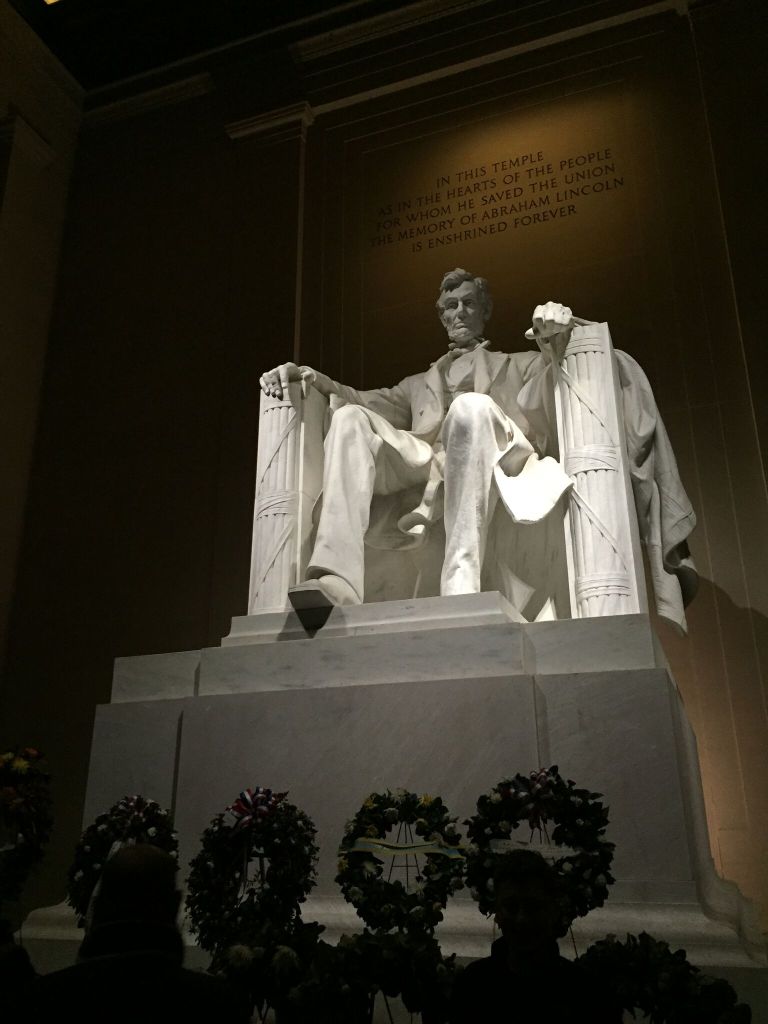 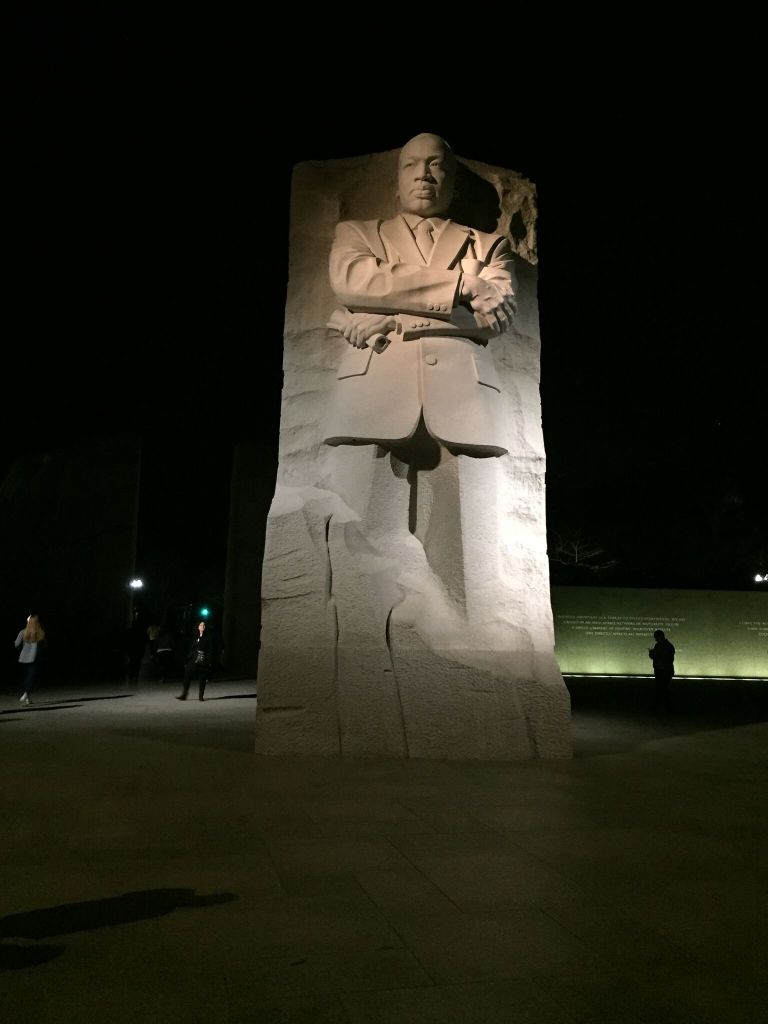 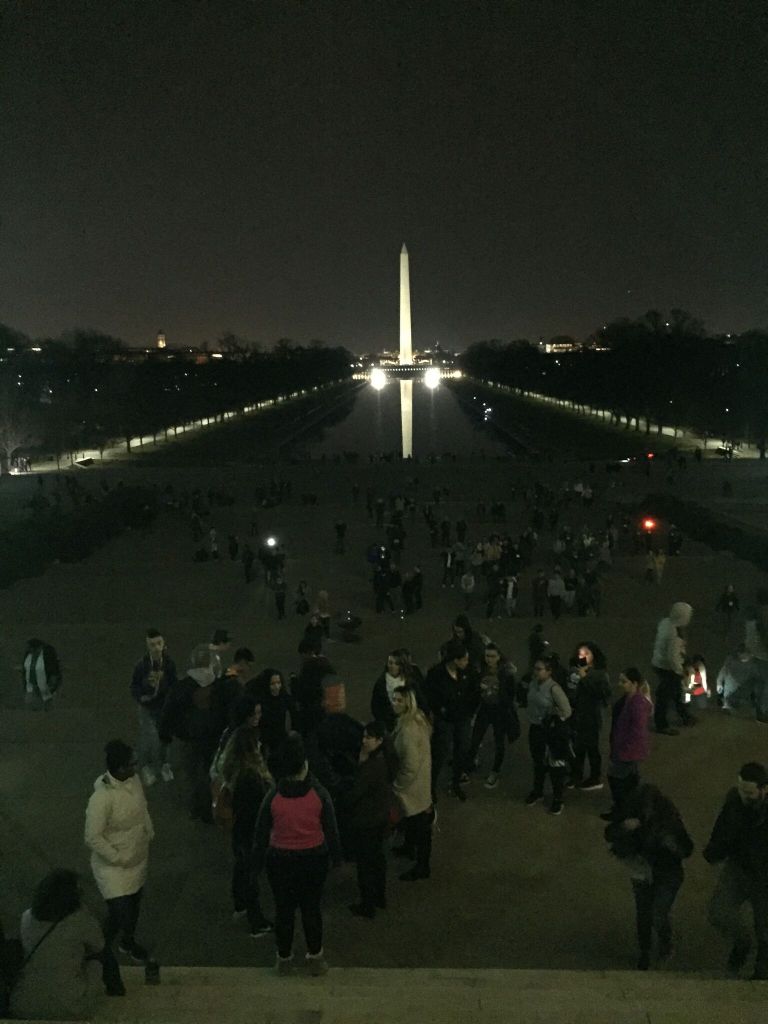 I enjoyed the walk around the mall which gave me the opportunity to pay my respects to great leaders of my country.

I headed back to my hotel to wrap up my whirlwind trip in Washington D.C. Amidst my apprehension about making the trip alone, I enjoyed it much more than I imagined and learned more than I anticipated.

Not only did I get to see fellow Bearkats in Washington and network with campus leaders from across the country, but I learned a lot about my leadership style, values, and how to incorporate them all into my future. I am thankful for the opportunity to attend the conference and I am excited to get back to SHSU to share my new knowledge with my fellow LEAP Ambassadors!

Thank you to Deloitte, NCLC, and Running Start for hosting an empowering conference. Thank you to the LEAP Center for helping to fund my trip and many thanks to Nancy Bocskor for her mentorship and encouragement to apply.