One of the most anticipated nights of the Legislative Session, the House budget night, came in a blink of an eye for the Austin interns.

As an intern for State Representative John Zerwas, I was able to witness the budget process unfold first hand. Representative Zerwas was appointed as Chairman of House Committee on Appropriations early on in session. After his appointment, things around the office started moving extremely quickly. When Appropriations Committee hearings were set first thing the very next day and his meeting requests doubled, I knew it was going to be a busy couple of months! As the big day came closer, we all got to business and worked towards getting the budget bill drafted and ready for the House Floor. After all, according to the constitution, this is the only bill that needs to pass this Legislative Session.

After countless work hours, meetings, and committee hearings, the budget draft was finally complete and ready for the House Floor. Historically, members have endured long hours in the process of passing the budget.  Last session, more than 200 amendments were filed.  This session, 402 amendments were pre-filed.  In preparation for budget day, we made sure our office was fully stocked on coffee and snacks as we expected a very late night ahead of us.

When the day finally arrived, the House convened on Thursday, April 6th at 9 a.m. The only bills scheduled on the calendar were Senate Bill 1 and House Bill 2, the supplemental budget bill. Team Zerwas spent most of the evening on the edge of our seats watching the House floor in our office and occasionally visiting the House Gallery to see the debate in real time.

Occasionally, I got to meet up with some other members of the Sam Houston Austin Internship Program (SHAIP) to discuss the proceedings.

The bill brought forth some heated discussions on many controversial issues such as funding school vouchers, Child Protective Services, and even feral hog abatements. However, the long night was cut short thanks to parliamentary maneuver crafted by the Appropriations Chair. At around 2 a.m. Representative Zerwas made a motion to move the all-pending amendments to Article XI. With the amendments moved to the so-called budget wish list, members were able take a record vote on the bill. After deliberating for nearly 15 hours, the House passed its version of Senate Bill 1 with 131 votes in favor and 16 votes in opposition. 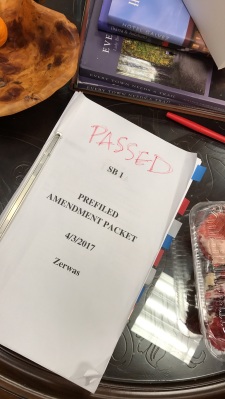 The successful conclusion to the process made us happy.

The budget process is complicated and extensive, but working in Representative Zerwas’ office this session has given me a better understanding of the needs and challenges our state is facing. My experience with Team Zerwas has been extremely valuable and rewarding. I have been exposed to such a wide scope of legislative issues that I would have had little knowledge of outside of this environment. I am thankful for this opportunity to learn firsthand the measures it takes to craft a budget that will ensure the prosperity and health of Texas. As this session continues, I look forward to the upcoming legislative adventures!