As Sam Houston State University students are wrapping up their semesters, LEAP Center students set out for another new adventure in Austin, TX.  Bestselling author and award-winning investigative journalist, Jeff Guinn, reached the tail-end of his book tour featuring his new book, The Road to Jonestown: Jim Jones and Peoples Temple, in Austin. The three-hour drive to attend his book signing at Book People was a special treat for us, a mix of history, story-telling, literature, and politics. With this in mind, we hit the road knowing the evening would be exciting and informative.

The trip to the Austin was swift and filled with great conversation. Staci, Jennifer and I, all strangers, quickly got acquainted with one another during the ride. I, being the LEAP Veteran, shared my experiences with the LEAP Center and my previous encounter with Guinn when he came to SHSU last year, hoping to increase anticipation for the two others—and it worked!

Guinn had generously agreed to meet with us and a few Austin interns at Whole Foods prior to his book talk.

For an hour and a half, he discussed his prior books (Go Down Together, Manson, The Autobiography of Santa Claus), his current book (The Road to Jonestown), and his future book (a work on the friendship of Thomas Edison and Henry Ford).

He also gave us insight into the publishing process and the financial side of things. Clara Herrera, a colleague of Mr. Guinn’s, joined us as well and briefly shared her experience as a journalist. As always, Guinn’s stories were intriguing and we were hooked! Before we knew it, it was time for Mr. Guinn to head over to Book People to make his author appearance.

Stephen Harrigan, author for a famous historical novel The Gates of the Alamo and A Friend of Mr. Lincoln (among others), facilitated the Q&A interview. For us, it was a two-for-one treat. 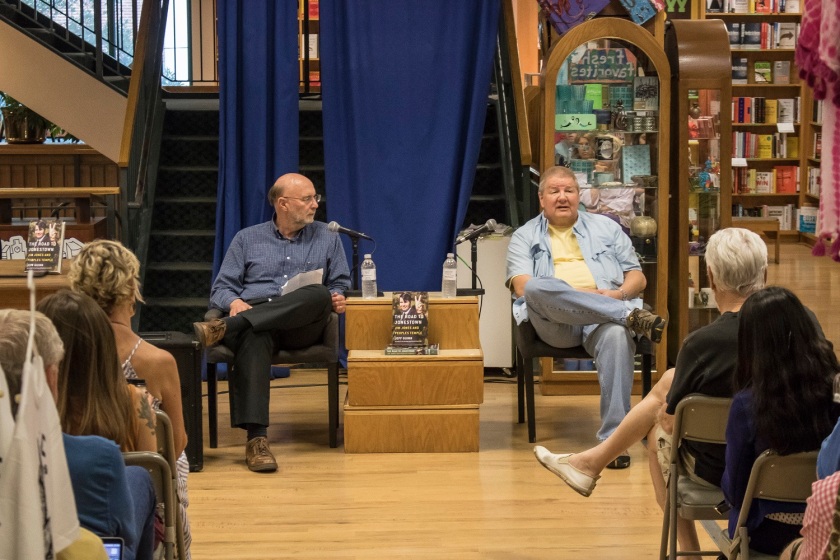 The interview began with the discussion of the early life of Jim Jones, who grew up in Indianapolis and was eventually the leader of the Peoples Temple. One of the interesting things Mr. Guinn talked about was how Jones sold monkeys door to door to financially operate his temple.

After learning about Jones’s childhood, one of LEAP members, Brian, was chosen as a volunteer to demonstrate how Jones preached to his followers. 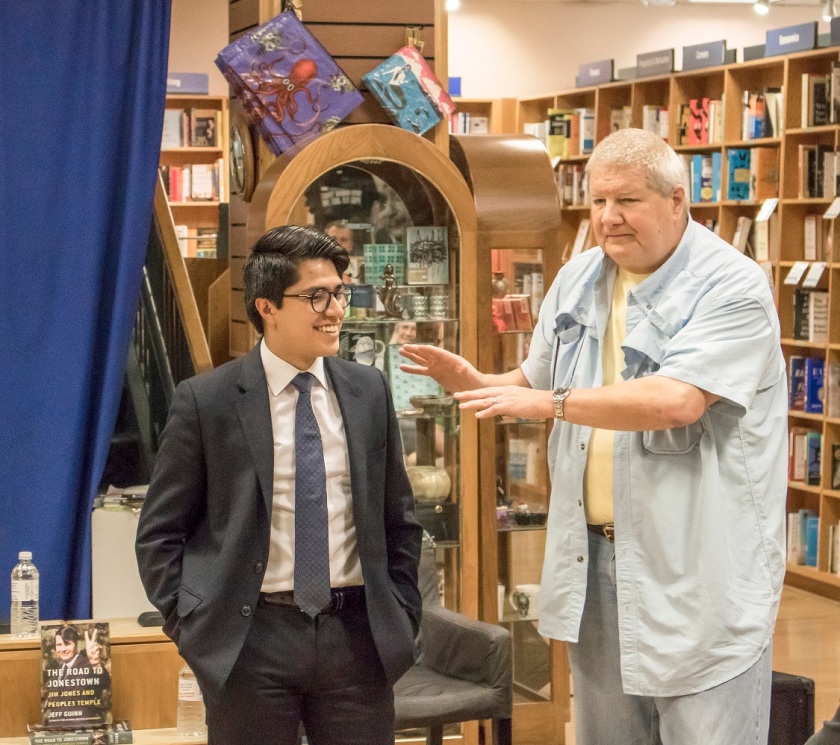 For example, Jones would tell one of the audience members (actually, a confederate) that they were going to get cancer, and he would drop chicken guts into their mouth when no one was paying attention.

Eventually the person would throw up and “get rid” of the disease being “healed” by Jones himself. Guinn played the role of Jones, Brian was the faithful assistant, and Staci was a member of the Peoples Temple. This was a demonstration of how Jones manipulated his followers into maintaining their loyalty to him.

After the interview, the audience had the opportunity to ask questions and get their books signed.

Following the book signing, we departed Book People and headed to a local Indian restaurant called The Clay Pit. Jennifer and Staci had never eaten Indian food, and were therefore forced to venture from their comfort zones. While enjoying authentic Indian dishes such as tikka masala, goat curry, and vindaloo, we conversed over the day’s events, highlighting our favorite parts. My favorite part was the book signing because we got special insight into the life of Jim Jones.

After dinner, we walked a few blocks from The Clay Pit to the Texas Capitol to see its after-hours beauty. After posing for a few pictures in front of the Capitol building…

…we explored the buildings extension and Austin’s historic Main Street. This short sneak peak into Thursday’s adventures made us excited for the next day ahead of us.

One special note: Although we were caught up in the history of Guinn’s narrative and his story’s about his career, we also noted his generosity.  He was generous for meeting with us, but he also showed the same generosity to his co-host, Stephen Harrigan, calling him one of the 2-3 best writers in the state of Texas.  He also complimented his friend, Clara Herrera, noting that she was one of the talented young writers currently doing good work.  It wasn’t false praise, but with a big book signing ahead of him, it would have been easy for him to focus on that.  Instead, he thoughtfully took time to share the spotlight with others.