On an unusually warm night for late October, dressed-up men and women were gathering at the beautiful Gaertner Performing Arts Center.   However, this wasn’t your typical style of late October costumes; instead of Halloween mummies and vampires, patrons arrived in their finest attire, for it was the night of the Art Department’s annual Gala. The building buzzed with the sound of people joyously conversing with old friends and new acquaintances alike. Each passing moment brought more excited people inside as they all prepared for the night’s festivities to begin. 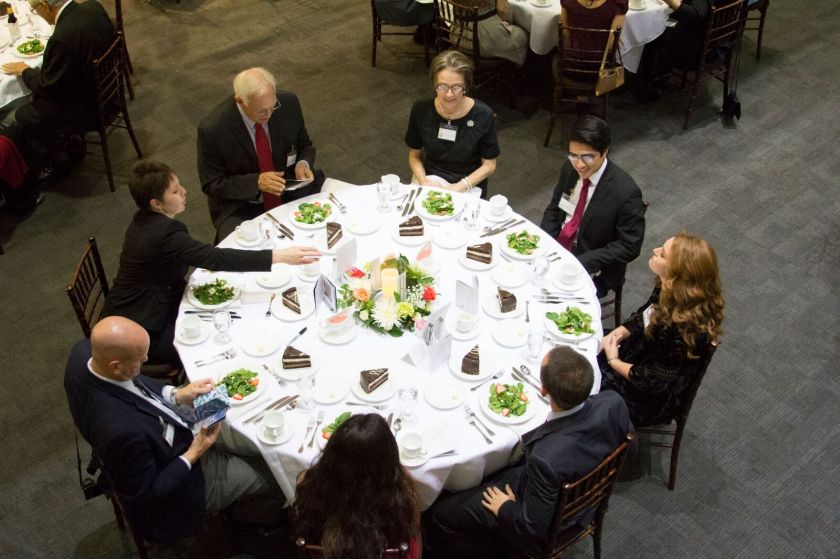 After finding their seats, everyone began to chat with those seated around them. The members of the LEAP Center as well as members from the Pre-Law Society found themselves sharing a table with Professor Mike Yawn and Ms. Stephanie Fors, as well as former mayor, Mac Woodward and his wife, Leanne Woodward. Conversations at the table ranged from the upcoming internships at the capital, to the Memorial Museum’s chickens, famous for roaming the grounds of the campus. Dr. Michael Henderson, Chair of the Art Department, acted as the night’s host, thanking people for coming out and officially kicking off the night’s proceedings. 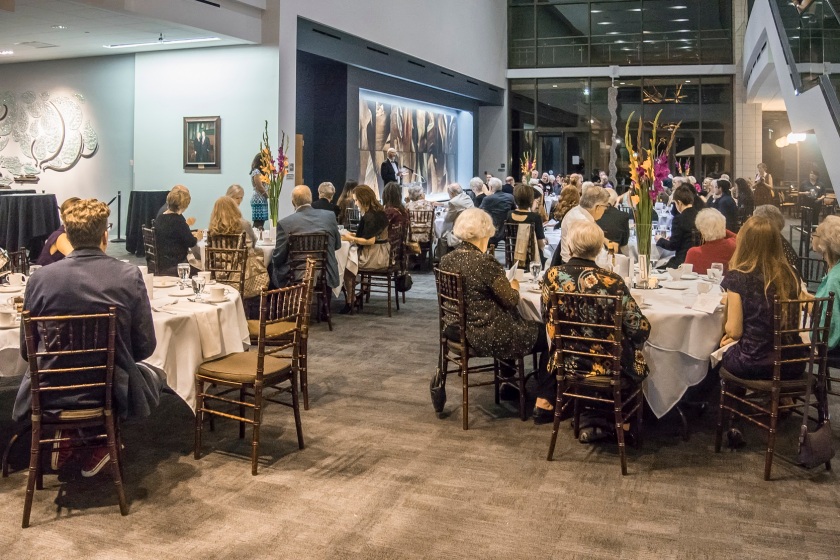 Following a wonderful three-course meal, the awards ceremony began. The first to be presented the award for Outstanding Alumna was Ms. Emily Peacock. A 2006 graduate of Sam Houston, she has developed a career around “snap shot aesthetic” photography. Peacock mainly focuses on her own family, and she photographs the private aspects of life one rarely gets a glimpse of. Her works have been featured throughout Texas, New York City, and Europe, as well as being in the Museum of Fine Arts in Houston. 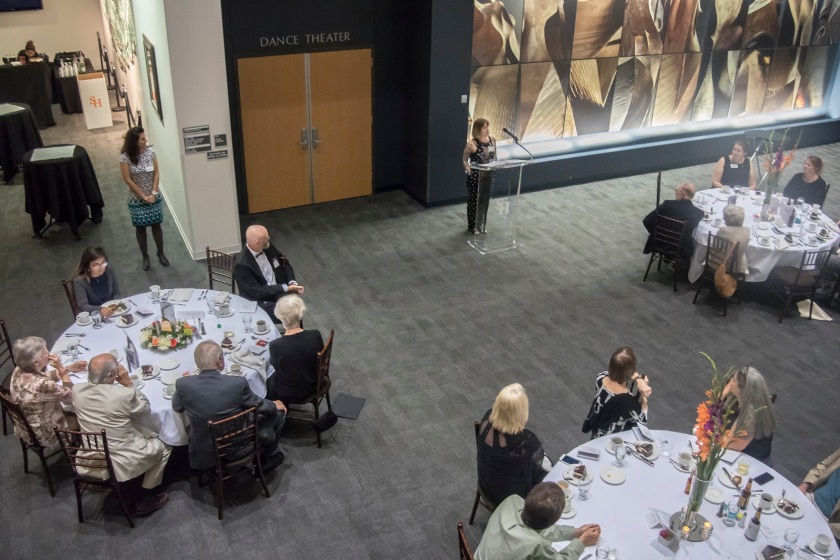 The next award for Outstanding Alumna was given to Ms. Cynthia Reid. After completing her degree in Art Education at Sam Houston, she taught for Conroe ISD, while also earning two more Masters degrees from Sam. She is well known for her work with water colors as she tries to capture the ever-changing sea into a single scene. She currently teaches at Sam Houston and coordinates the Angel Show Holiday Market in Huntsville.

The recipient for Outstanding Supporter of the Arts award was Mr. David Adickes. 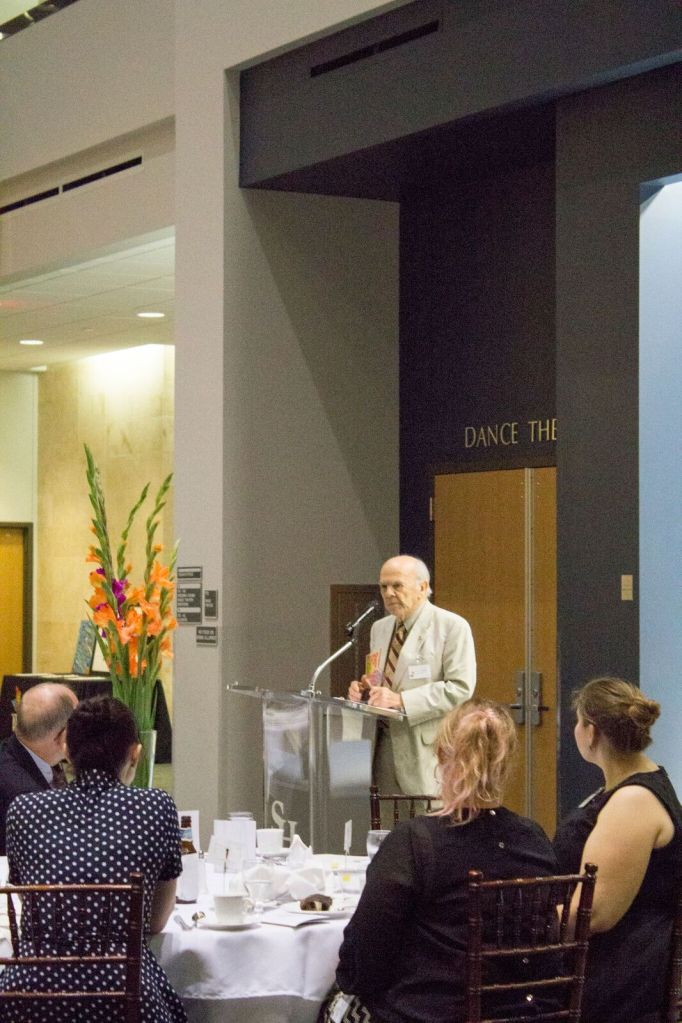 Perhaps famous to most in town as the sculptor of the giant Sam Houston statue, he is also famous for his quick-witted humor and as the savior of Huntsville’s old high school (for, as he says, “how can someone tear down the place where you learned to jitterbug”). His works have been featured in solo shows throughout Texas and have received top honors at many competitions. His impact in the field of art, especially in Huntsville, is undeniable. It must be mentioned that regardless of his life-long accomplishments, he has not let the success go to his head as he is still as down-to-earth and fun loving as anyone.  He even took time after the ceremony to pose for a goofy picture with the members of the LEAP Center and Pre-Law Society. 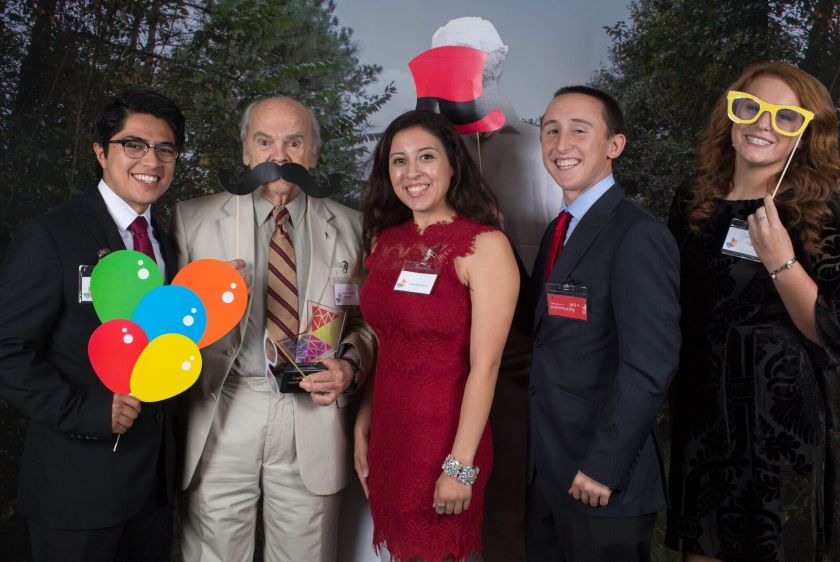 After the formal conclusion of the gala, guests once again mingled about, congratulating the recipients of the awards. On the way out the door all guests were presented with their “swag bags” as a last parting gift before stepping out into the night, which had gotten much cooler during the preceding events. 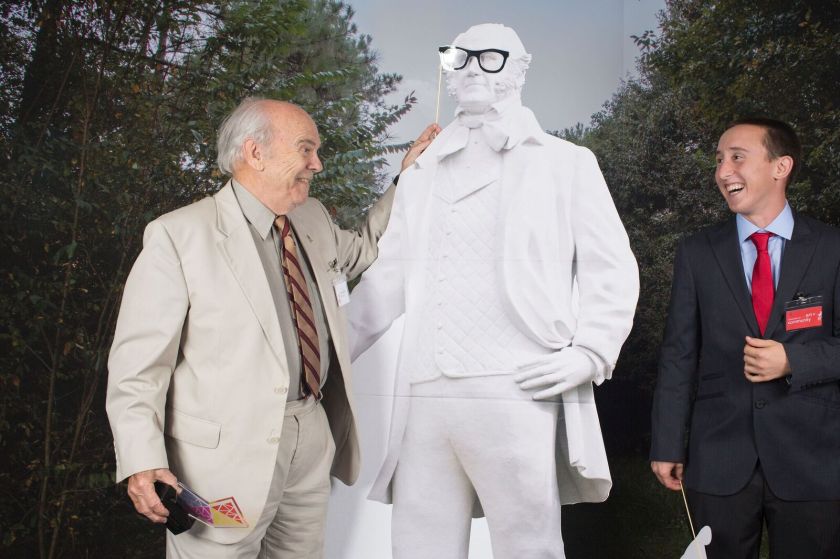