The last session of the TTF was a highlight, a rare joint appearance by U.S. Senators Cruz and Cornyn. When we arrived at the UT campus we were met by a cluster of protesters who’d decided to take advantage of the senators’ presence to voice their opinions on a number of issues. 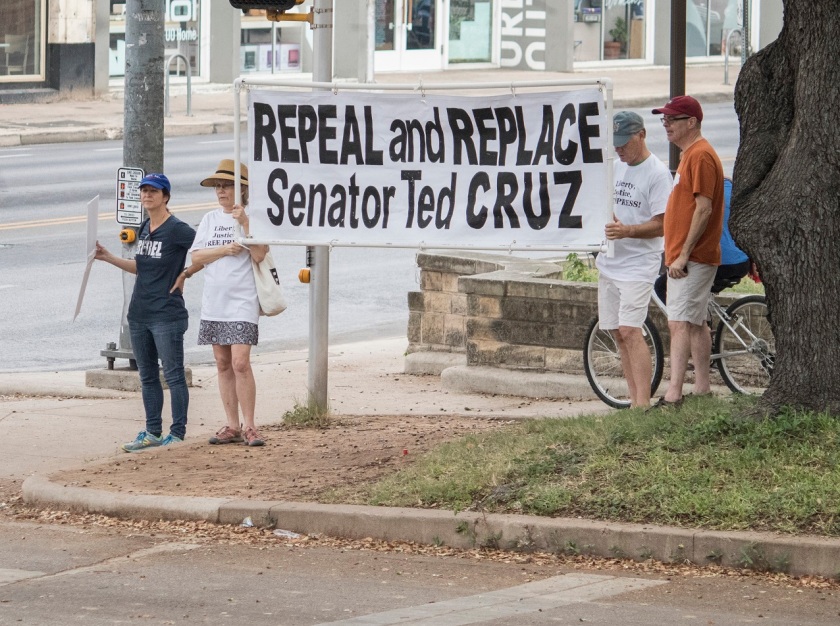 We navigated the crowds and managed to snag ourselves seats before the auditorium filled up. Evan Smith, the event moderator and the Texas Tribune CEO, first began by thanking all the donors who made the festival possible. He also warned the crowd to be respectful or risk being escorted out by security, before introducing the senators.

The prompts ranged from climate change to immigration and many of the responses were met with boos and hisses, even with the earlier warning from the moderator.

Even with the tough crowd, we considered ourselves lucky to be able to attend an event with a pair of the most important figures in Texas politics today, and we each took something different from the experience. 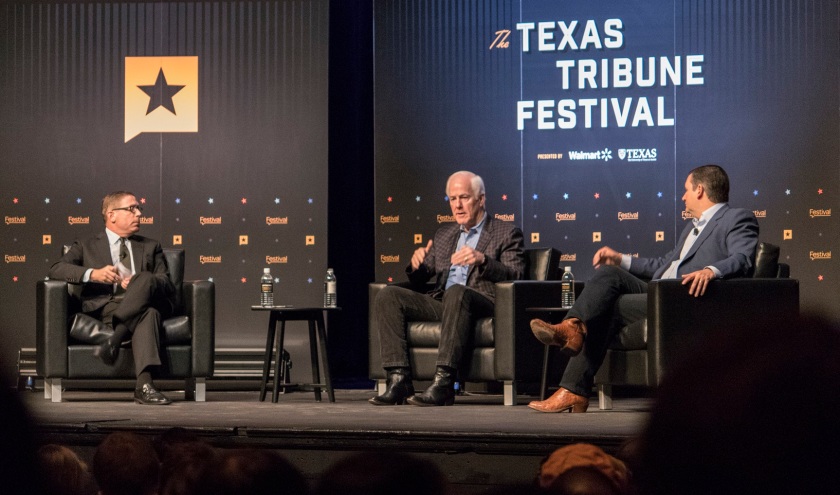 At the very end of the program, the boos and hisses turned into an all-out protest.

By this time, however, Senators Cruz and Cornyn were leaving the building, so the protesters also moved outside, to catch at least some of the crowd as an audience.

Home Slice Pizza is a local favorite in Austin, and it’s a particular favorite of the LEAPsters who interned in Austin this past  session.  It has been serving its New York style pizzas since 2005 with booming business ever since . It was even forced to open an adjacent restaurant specifically for carry out and single slices when it could fit no more people in the original building. We enjoyed having that time to reminisce the time we spent in Austin and, as for actually eating, we shared some pepperoni pizza for the non-adventurous; pepperoni and mushroom for those who thought they were “adventurous”; and a white clam pizza for those who liked living life on edge. With our stomachs full we headed on towards the Elisabet Ney Museum.

Elisabet Ney’s Museum was our last stop in Austin, Texas before heading back to Huntsville. Elisabet Ney was a German-American sculptor who spent her first half of her career in Europe and later immigrated to Texas. She is well-known for her famous life-seized marble figures of Sam Houston and Stephen F. Austin, among others. 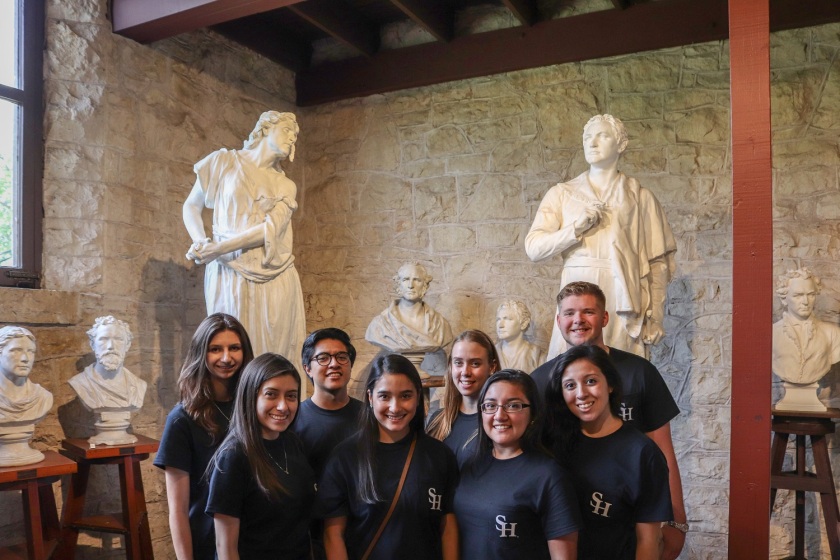 As SHSU students, it was nice to see the different versions of Sam Houston she sculpted. 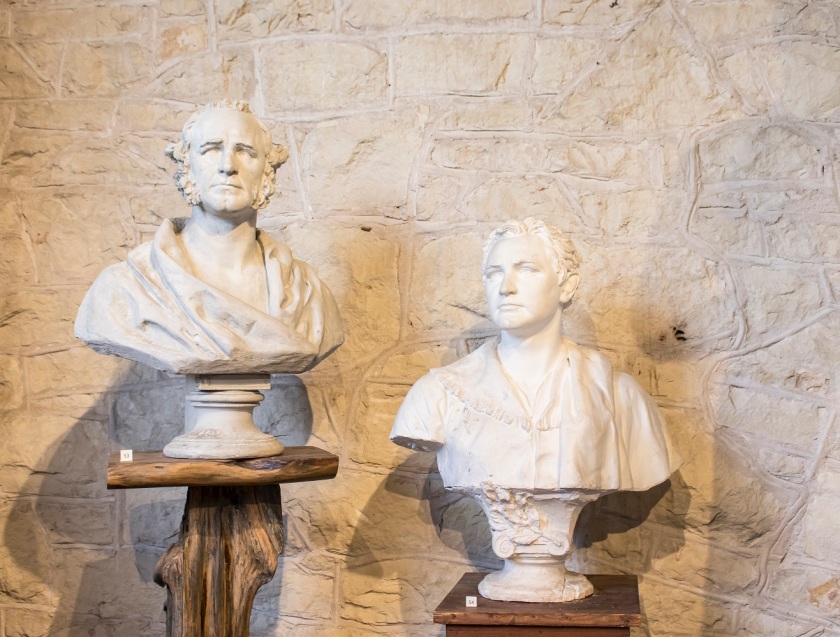 This was especially true for the five students heading to Washington, DC, later this month to see her bust of Sam Houston unveiled in the Ways and Means Committee room in the US Capitol building (thank you Congressman Kevin Brady!).

Today, her house in Austin, Texas remains standing as a museum dedicated to her life and her art.

Her sculptures are not only located in her home in Austin but are also in the Texas State Capitol, Washington D.C., and in different countries across Europe.

We were able to view and admire her sculptures and explore her home as most of it has remained the same as when she lived there dating back to the 1800s. 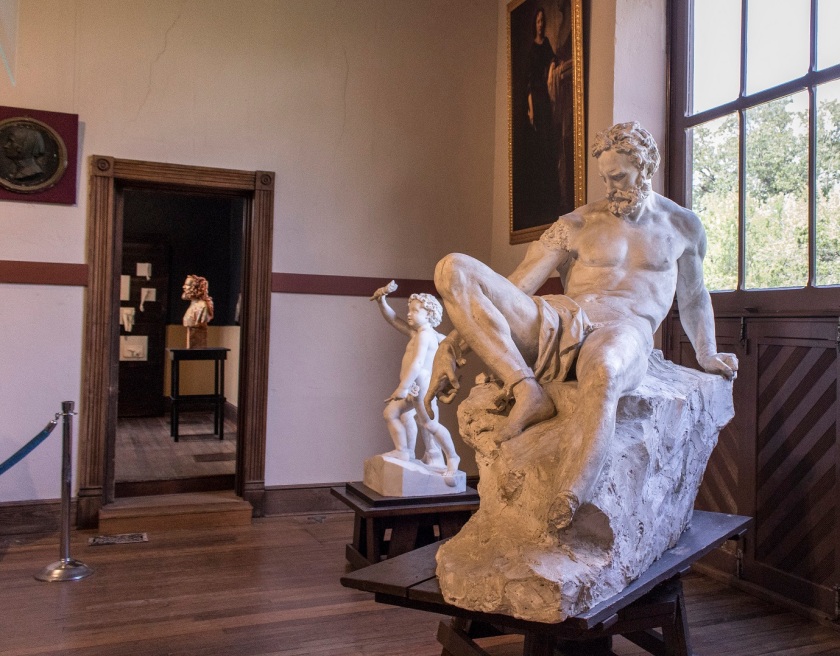 Downstairs had most of her sculptures and art supplies…

…while the upstairs rooms contained exhibits of her furniture such as their old bath tub. Many of us couldn’t believe how tiny it was, especially when the whole family had to use it in order to save water. There were history timelines on the wall that showed us a little bit of how she met her husband and his history. Important items such as her marriage license are also conserved in the home.

The tour guide had invited us to explore the “magical secret door” which many ambassadors were interested to take up on the challenge of finding it! There were small dangerous spiraling stairs in the second floor that led us up to her study room. Once there, we found a type writer that was placed there so that guests could leave messages to other guests.

As we searched, I was able to locate the secret door that was used as book shelf but was sad to see that another door behind the secret one remained locked. I was still proud to say I had taken up on the challenge to find the famous secret door.

After touring her house and viewing the art it was time to head back to Huntsville.

We were sad to leave but this was a perfect ending to a fun fill weekend learning about politics and art.