Day five of our trip began early and ended late. With capitol visits, car rides, and climbs ahead of us, we packed up for the day and headed north enthusiastic about the day’s adventures!

We began our morning with a visit to Taliesin West, the winter home of architect (or as our wonderful tour guide, Tom, put it, “startchitect”) Frank Lloyd Wright.

Our tour began with a not-so-brief backstory and history of Wright, explaining everything from the first time he got a job at an architecture firm, to his last years, and all his money troubles in between. Wright originally came to Arizona to build a large building in Phoenix, but the building was never constructed due to a crash in the stock market. When Wright’s doctor told him that he needed to move south for the winter to keep his health, the doctor suggested Florida, but Wright was more familiar with the Arizona and came to Scottsdale instead.

At this time, he was actively running his school of architecture, so he moved all his students down south with him. Wright bought a plot of land in Scottsdale, where he planned on building a winter home. As his students were seeking out a flat spot to set up camp on the property, they found petroglyphs on some large boulders. Wright’s favorite petroglyph sits close to the entrance of his office. He interpreted it to be two hands clasping each other in friendship. It is now the symbol of Taliesin West.

There are several buildings on the property, many of which are linked by walkways or short passages. The house had all of Wright’s motifs: tucked away doors, low entrances leading to large open spaces, open floor plans, custom furniture… 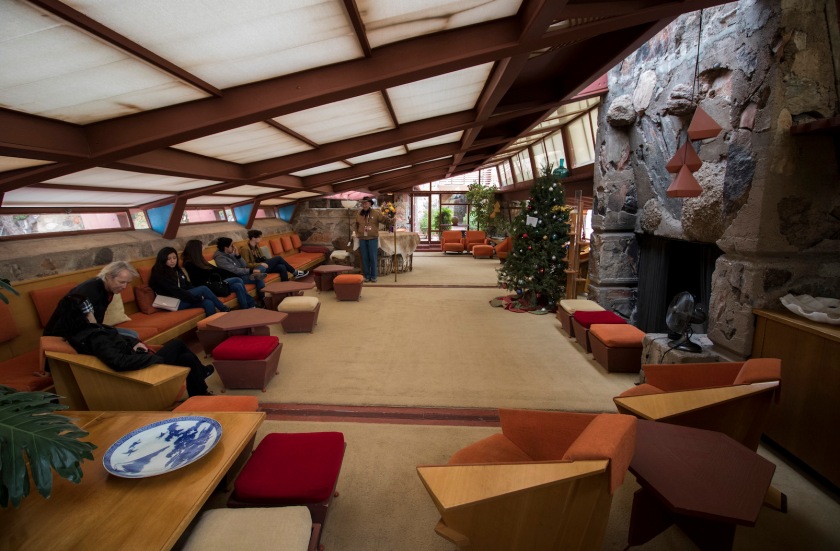 …horizontal, prairie-style buildings that blend in with the surroundings (just to name a few). Today the FLW School of Architecture is still operated in Taliesin West in the wintertime, so we could not see all the rooms in the buildings. Fortunately, we did see Wright’s bedroom, office, living room, conference room, auditorium…

…and cabaret theater. The entire tour was a real treat as the LEAP Ambassadors love Frank Lloyd Wright’s architecture.

The tour provided wonderful insight on FLW’s background and career, as well as his personal life.

Before heading to Sedona, we visited the Arizona Capitol Museum.

The Museum’s mission is to provide cultural, political, and social history to its visitors. Interestingly, the capitol was built in 1901 before Arizona was even an official state. As we walked in we couldn’t help but notice the beautiful Arizona seal that included the year 1912 (the year they became the 48th state to join of the United States of America) on the bottom.

We were greeted by the helpful staff who gave us an introduction before allowing us a self-guided tour. We had four floors to explore and a short amount of time so we made a plan and then executed.

A piece of the ship was even on display for visitors to pay respects to. The second floor of the capitol museum housed the former House and Senate chambers.

The legislature junkies in our group got their fix while roaming around the legislative branch exhibits. The third floor of the museum included former office of the Governor and an exhibit about the history of voting in Arizona. The governor’s office had an extensive history of the former governors. The most notable was the first woman to serve as governor, Rose Mofford. She paved the way for many other women to become governors of Arizona.  They had a wig resembling her hair you could try on, as well as a cutout of Uncle Sam, which we tried…

…with varying degrees of success… 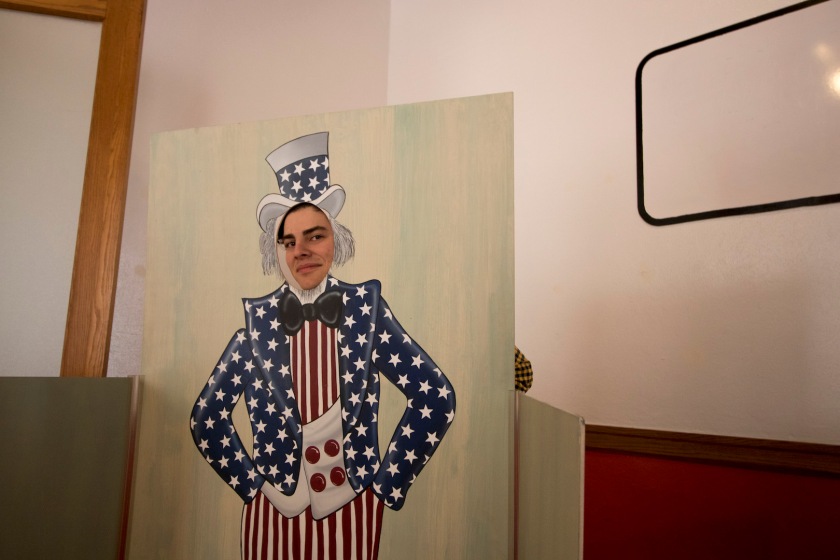 The legislature and the governor moved into the new capitol building by 1974, but the museum decided to preserve the space for its historical importance. We climbed one final flight of stairs to view the dome from the highest spot within the capitol before descending down the tight staircase.

Happily so, LEAP gained another capitol to add to our map and another memory for all of us to cherish.

In preparation for our afternoon hike, we visited Taco Guild for lunch. Located inside an old church, the restaurant’s unique character added a charming ambiance to our dining experience. Because we were in a hurry, we all ordered tacos for lunch with queso, guacamole, and salsa for appetizers.  Although we all had tacos, we each ordered different types such as Al Pastor Pork, Pork Adovada, Yucatan Shrimp, and the Chipotle Cherry Steak. 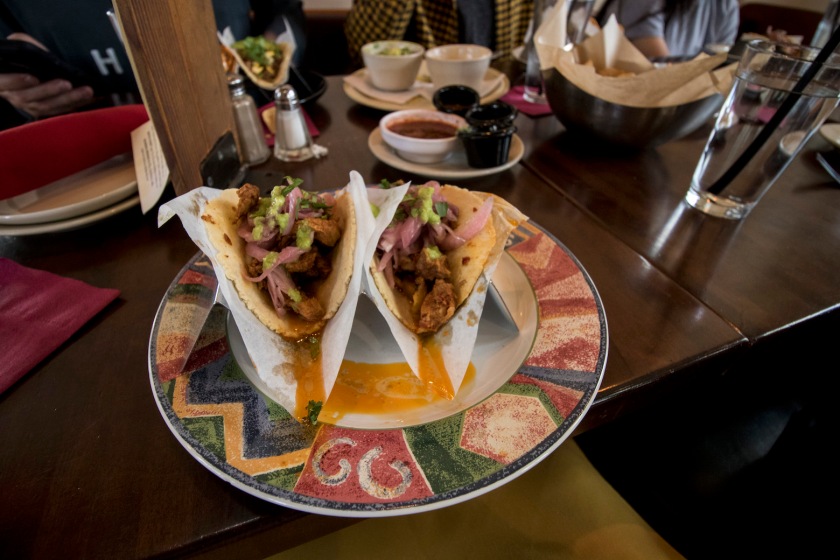 The restaurant was fun and served good food. We were thankful for time to stop and eat lunch, although we were sad to leave such a delicious restaurant and the beautiful city of Phoenix.

In less than two hours we drove from the deserts of Phoenix to the red rocks of Sedona. We were excited because of how beautiful the landscape was.

The red rocks greeted us with warm colors and picturesque skies. We drove through town to the Airport Mesa trail head to begin our journey up and around the Airport Trail Loop.

We took a quick detour to the “Summit” for a sampling of views from our actual hike. 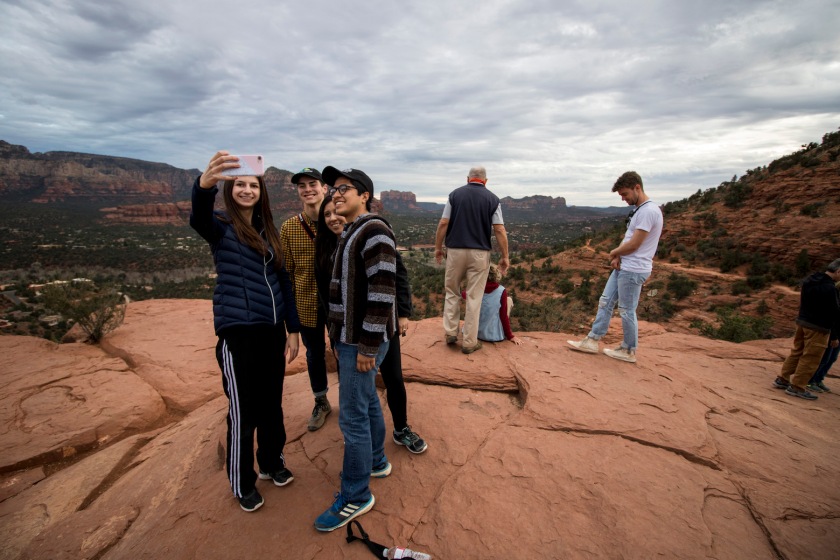 The climb was short and the slight elevation allowed us to see panoramic views of Sedona.   We took pictures and absorbed the moment thinking this was our actual hike! We were wrong though, this was only the beginning of our beautiful evening hike! 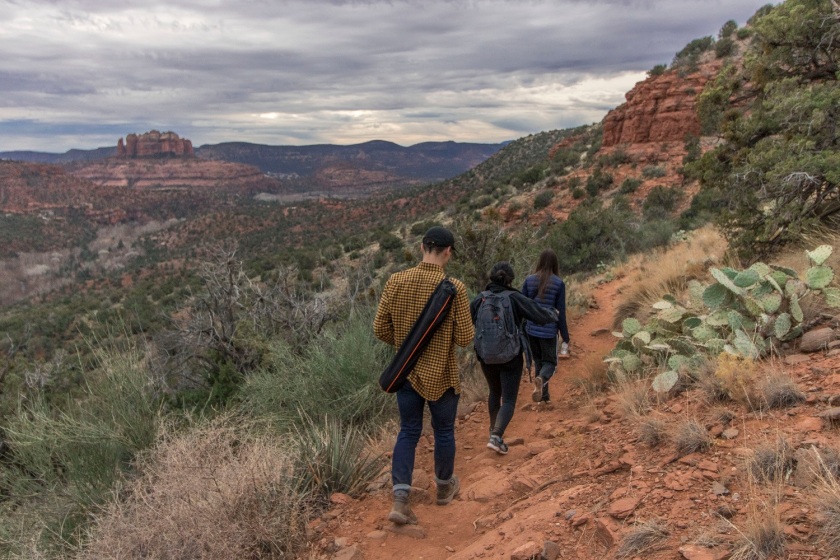 We began the airport loop which was a gentle incline that weaved up and around the Sedona Airport. However, the hidden airport did not distract from our hike or create an eyesore throughout the hike as it was hidden in thick desert vegetation. Once we made it halfway around the loop, we stopped to admire the sunset and photograph the moment.

We all enjoyed the breathtaking views and the beautiful red rocks of the Airport Loop.

We began our journey down and around the loop just as the sun sank.

Although our visit to Sedona was short, we enjoyed the beautiful sights and the leisurely hike.

As we loaded up in the car, it was time to head onto Flagstaff for the night.

Stopping for dinner as we arrived in Flagstaff, we dined at the Beaver Street Brewery. Again we were treated to a fun atmosphere and good food. The menu was diverse which allowed us to each pick meals we enjoyed such as the BBQ Chicken Pizza or the Beaver Street Burger. Exhausted from a busy day, we treated ourselves to the dessert trio before searching for our hotel for the night.