After arriving in Phoenix the evening before, LEAP Ambassadors awoke eagerly to explore a new city in the Grand Canyon State. Our second day in the “Valley of the Sun” included copious amounts of outdoor activity, Vitamin D, and adventurous excursions!

The day’s first activity began with a challenging hike to the second highest peak in Phoenix, also known as Piestewa Peak. The Summit trail was only 2.4 miles long, but the 1,165 foot elevation made the trek tough. We began the journey with a full tank of motivation and A LOT of water and a selfie!

As we climbed up the mountain, the incline got steeper, the sun stronger, and the pathways tighter. Thankfully we occasionally stopped to admire the breathtaking views and to catch our breath along the way.

The breaks also allowed us to explore juts off the mountain side. We even made friends with a mountain chipmunk! Although it was a treacherous climb…

…we conquered the summit and reached the top!

The views were breathtaking and well worth the energy expended on the journey up. We couldn’t pass up the opportunity to take group selfies and some individual pictures as evidence of our victory.

We soon began our journey down the mountain…

…and felt a sense of pride as we reached the car, reflecting on the beauty of what we saw.

It was a terrific way to start our last full day in Phoenix.

After refueling and cleaning up at the hotel, we headed out for our next adventure of the day, the Phoenix Art Museum. Upon arriving we were greeted by a giant red tyrannosaurus rex!

Fortunately, it was just a sculpture by Sui Jianguo named Jurassic Age and we were able to head inside to explore the museum. We immediately noticed hundreds of butterflies adorning the walls. 25,000 black paper moths and butterflies were part of the museum’s installation art called Black Cloud by Carlos Amorales. 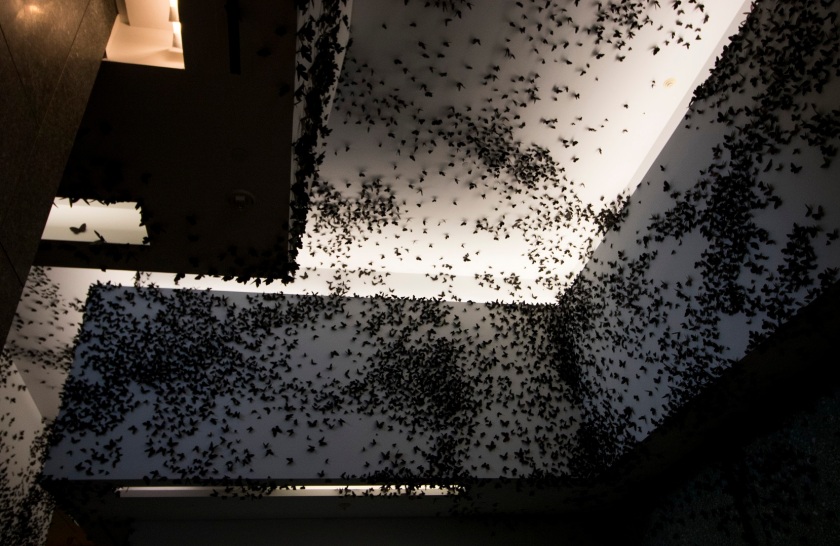 During our visit at the museum, we saw art from some of our favorite artists including Alexander Calder…

Amidst our favorites, we also learned about new artists including Shiela Pepe…

and Phillip Curtis. Shiela Pepe’s exhibit titled Hot Mess Formalism was a mixture of installation art and paintings. Known for using fabrics, derby rope, knit, crocheted paracord, chainmaille, and hardware to create large works of art such as Not So Good for Emperors. Phillip Curtis’s art was featured in the New Deal and American Regionalism gallery with artists such as John Stewart Curry, Thomas Hart Benton, and Grant Wood depicting a sad time for America and harsher lifestyles.

Some of our favorite art from the museum included Mass by Cornelia Parker, and You Who are Getting Obliterated in the Dancing Swarm of Fireflies by Yayoi Kasuama. Kasuama’s artwork is an interactive experience for all who enter the dark room. Made of mixed media with LED lights, visitors are absorbed by darkness but then consumed by the colorful array of lights hanging throughout the ceiling. The twinkling lights dangle and mix with the visitors, but do not help guide visitors to the exit. We admired the “fireflies” before stumbling out of the special exhibit.

After finishing with the installation art, we realized the sun would soon be setting and hurried off to Papago Park for sunset!

Even though we had gone through one of the most vigorous hikes in LEAP history earlier in the day, we still had energy to explore Papago Park. The sun was nearly set when we arrived to the park’s main formation, Hole in the Rock. When we got to the top of the formation, the views were still unforgettable.

From the top of the formation the entirety of the Phoenix metropolitan area was visible with all its bright, shining lights.

With such a sight, we set out to photograph the beauty of the nightscape.

After snapping a few photos and watching the sun sink below the horizon, we packed our gear and headed back to the car.

We did what our mothers told us not to do: we spoiled our dinner and stopped for ice cream in Old Town Scottsdale at an ice cream stand called Shakes & Cones… 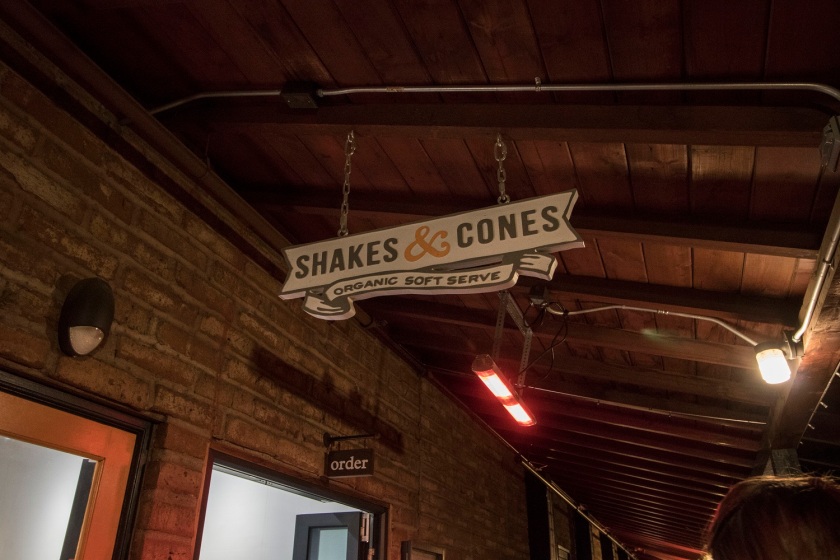 …where we treated ourselves to some soft serve. After our busy day, the sugar was a welcome treat! We indulged in ice cream cones, ranging from peanut dipped cones, Oreo dipped cones, and one smothered with hot fudge.

After finishing our dessert, we took a short walk to the nearby city park. There, we took a photo with one of Robert Indiana’s LOVE sculptures, the seventh that LEAP has visited!

We even found a Louise Nevelson sculpture titled Windows to the West in the park. Also scattered throughout the park were yarn-bombed merry-go-rounds, where we all took turns getting dizzy before driving to our dinner spot.

Slightly full from our late lunch and sweet treat earlier, we ordered hummus, gyros, and the kafta burger. Our meals were both filling and tasty.

With the end of dinner, we closed another day of our Western Tour. Filled with sunshine and memorable experiences, we departed back to the hotel to get ready for the next full day ahead–and, of course, the year ahead, as well!