Day eight of our Western trip began early, as we had a long drive ahead of us and much to see along the way.  But we weren’t going to let time constraints get in the way of us seeing the beautiful and rugged southwest!

On our way to Monument Valley, we decided to make a quick stop at the Mexican Hat Rock. The hoodoo, which looks like an upside-down sombrero, is on top of a mountain, making it a prominent formation in the already striking landscape.

The rock fit with our outdoors theme and Mexican themed trip of the West. We didn’t want to take too long so we would have enough time to see everything at Monument Valley, so we took a quick picture as we continued our drive south.

As we neared the park we stopped to take a couple of photos of the famously long road that leads you into the park.

Monument Valley is a part of the Navajo Parks administration, that helps to preserve the tribal parks and monuments of the Navajo Nation. The monuments were breathtaking.

The first monuments we drove to are considered to be the most famous: the West and East Mittens.

We stopped for a few quick photos…

…and continued our drive along the bumpy dirt road, which is 17 miles long. As we made our way through the park, we saw other famous monuments such as the Three Sisters…

…which are near the southwest corner of Mitchell Mesa. We also saw The Cube which was an unofficial part of the driving tour. As we stopped to take a picture, we made another new friend, a dog who we named Red, although he was actually black.

He followed us for about three miles…

…and sometimes managed to actually get in front of us and wait on the side of the road until we came by.

Monument Valley was a real treat for us because we very much enjoy John Ford and John Wayne movies.

The Searchers, a 1956 Western, was filmed in Monument Valley. Of course, it was directed by John Ford! After previously hosting a Searchers Film Festival, it was exciting for us to visit the place where the filming took place. 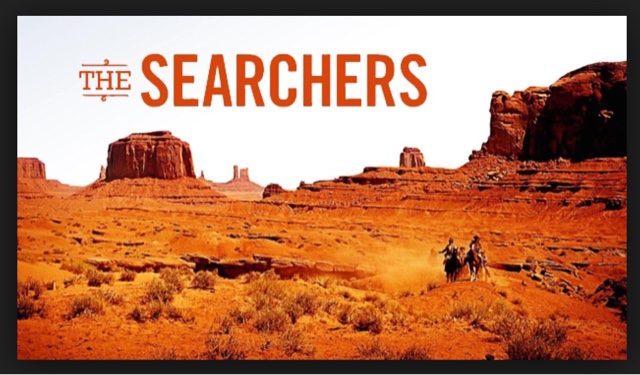 As we headed for Albuquerque, we played games like Yahtzee and Spades to pass the time. It worked because our five hour car ride passed quickly and we arrived in Albuquerque before we knew it!

After dropping our things off at the hotel, we headed out to Pueblo Harvest, a Native American restaurant near Old Town Albuquerque. Based on the recommendation of our waiter, we ordered taco bites as appetizers, the Pueblo Feast as a feast, and an order of rabbit to satisfy Brian’s curiosity. As the name suggests, the Pueblo Feast had copious amounts of food; green chile stew, mutton stew, southwest red chile potato salad, seasonal vegetables, the Jemez enchilada with ground bison, frybread, pueblo oven bread, a blue corn muffin, three berry pueblo pie, and a strawberry rhubarb pueblo pie were all included in this dish. Everyone enjoyed the feast, but the rabbit was the group’s favorite.

After such a large meal, we felt we needed to take a walk, so we looked around the outside the Albuquerque Museum of Art and History, where they have a sizeable collection of sculptures including a massive piece by Jesus Moroles and several sculptures by the artist Ali Baudoin, who also has a large sculpture titled Rainbow Walker on Sam Houston’s campus. After we walked enough, we hopped in the car and drove back to the hotel to rest up for the next day of our trip.