This past Thursday, the LEAP Center hosted the opening reception for our fifth art exhibit…

…in an attempt to bring in both students and Huntsville residents alike to show off the artists that the Ambassadors have had the pleasure of meeting over the years.

In total, we had 12 artists exhibited with over 100 displays in the LSC art gallery, including two arts (Mark Burns and Lee Jamison) in person!

The LEAP Ambassadors spent approximately 45 hours planning and putting together the exhibit complete with original pieces (with many thanks to the Wynne Home Art Center, Ralph and Linda Pease, and Mac and Leanne Woodward), photos of them with the artists and their art, and a small wall dedicated to them as a means of promoting the Center to any art enthusiasts.

On opening night, we arrived early in the day to add any last-minute touches to the gallery before the reception at 5. Once the evening arrived, students, faculty, and friends alike all stopped by to enjoy the art.

All who entered were enraptured by Burns’ display of photography and most chatted with him about his photographic methods.

Lee Jamison arrived a bit later, and also had many admirers.

His “Hurricane Harvey” pastel was one of the clear favorites of the crowd, and it was a piece that was done in the LSC Art Gallery one year ago!

Overall, the LEAP Center’s Art Gallery Opening Reception was an overwhelming success and we thank all who took time out of their day to stop by and share a passion that we care for so deeply. 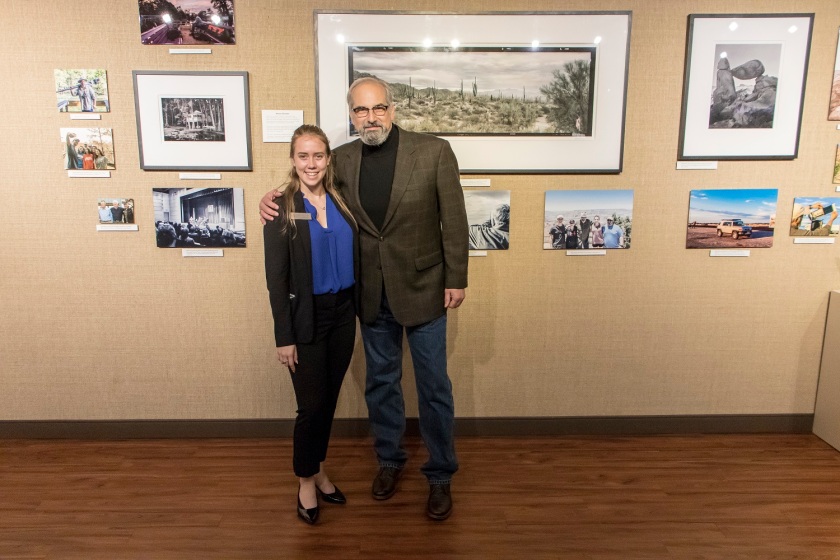