Most of New York State’s must-see attractions are landmarks in New York City, such as the Statue of Liberty, the Empire State Building, and the Brooklyn Bridge.  Today, however, we redirected our attention to a different historical landmark: the New York State Capitol in Albany.

The capitol was built over a period of 32 years; finally in 1899, Governor Theodore Roosevelt declared the building complete. We noticed right away that, although grand in style, the capitol did not have a dome.

In fact, according to the National Conference of State Legislatures, New York is one of eleven “domeless” capitol buildings. However, its architectural grandeur was still fascinating, and beautiful, with the exterior being cut and carved out of granite. The building has four floors with eight elevators and about 600 rooms.

We started our tour with the Senate Staircase; its richness of carved ornament exceeds any other feature of the Capitol. Looking up, we could see the skylight and laylight (a window designed to diffuse direct natural light). 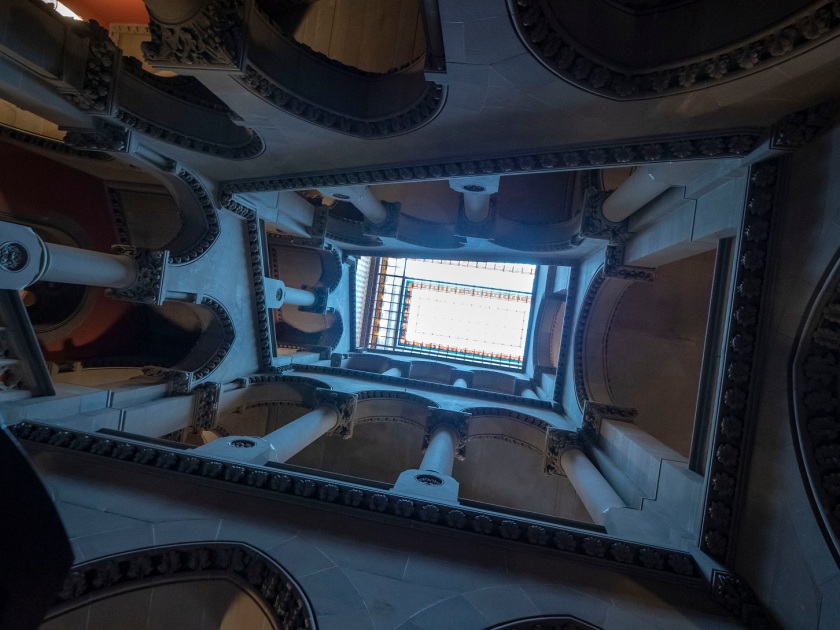 We proceeded to walk to the Flag Room where a third of New York’s battle flags are stored, the majority of them from the Civil War. Our next stop was the Assembly Staircase where the upper level was decorated with brilliant red and gold hand-stenciled patterns.

We walked through the Washington Lobby to arrive at the Great Western Staircase, sometimes referred to as the “Million Dollar Staircase.” (We all agreed later that this was our favorite section of the Capitol.)

It included hand-carved stone faces of symbolic individuals who had a powerful influence on the state and nation, such as Abraham Lincoln and Daniel S. Dickson.

Our next stop was the Governor’s Reception Room, commonly referred to as “The War Room.” Ironically, it was originally designed to be an open space to house the dome, a project that was never completed. Instead, the ceiling has murals of important events from early America’s military history such as the Battle of York and World War I. 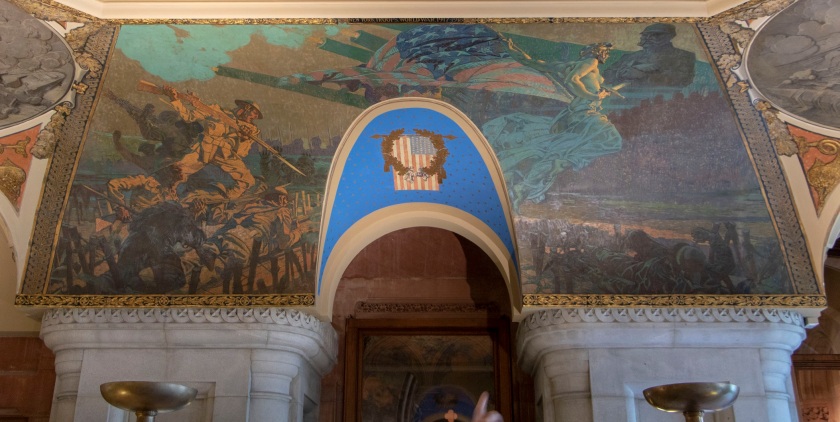 The Senate Chamber was on the opposite side of the third floor. 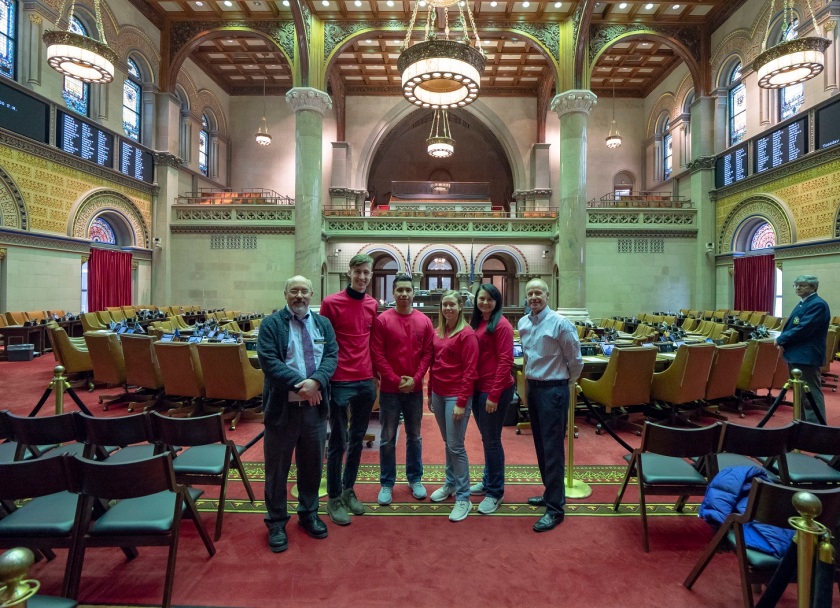 This chamber accommodates sixty-three senators, thirty-one more than when the room was first occupied. Our second to last stop was the Hall of Governors, a portrait gallery where we saw familiar faces such as Theodore Roosevelt and Franklin D. Roosevelt, and some not-as-familiar-to-us, such as portrait of the former governor Mario Cuomo, father to current governor, Andrew Cuomo.

We concluded our tour by walking through a hall of paintings that capture the scenes of past and present development of the Capitol and the State and included art from luminaries such as Thomas Moran, Asher Durand, and Jasper Cropsey.

It was curated geographically, designed to emulate walking across the state, east to west. Without a doubt, this was our favorite state capitol (sorry, Austin!).

The Capitol ranks even higher in our minds when taking in the entire environment.  There is an underground complex, which connects the Capitol buildings to other offices…

…and that showcases artists such as Adolph Gottlieb.

Moreover, on the exterior, they have some wonderful grounds!  Although many of the buildings were under construction and the grounds were dappled with snow, they still had quite the scenery.  We found, for example, a Claes Oldenburg…

We also witnessed a march of sorts…

…with hundreds of people gathering to support the “green light bill,” which is a bill proposed in the legislature to provide drivers’ licenses to all New York residents, regardless of citizenship status.

To stay on track, we grabbed a quick bite from Maurice’s Pearl Street Deli for a quick to-go lunch.  We got a sampling of deli sandwiches, and some not-to-be-found-in-Texas sodas, and hit the road for our next town and stop!

After a short trip through upstate New York’s picturesque landscape, we arrived in equally charming Stockbridge, Massachusetts, home to the Norman Rockwell Museum, found at the end of a short, winding drive lined with bare trees and snow-covered ground.

We were invited by a docent to attend his overview of Norman Rockwell’s life, and while we had a good time perusing and reading about Rockwell’s art on our own, we truly enjoyed hearing his behind-the-scenes stories that helped give Rockwell’s art more meaning.

Rockwell was extremely talented from a very young age. When his father would read him stories, young Rockwell would have him slowly read the details so that he could sketch what his father was reading, and when his friends would be playing sports, instead of playing along, he would sketch his friends playing.  By the age of 15, Rockwell got his first commission for four Christmas cards. While still in his teens, he became the art director of Boys’ Life, the official publication of the Boy Scouts of America.

In 1916, at only 22 years old, Rockwell sold his first cover for The Saturday Evening Post. Over the next 47 years Rockwell would provide another 322 covers for the magazine, reaching millions of readers.

In 1941, President Franklin Roosevelt delivered his Four Freedoms Speech. Two years later, Rockwell answered what he considered to be his call to action in illustrating FDR’s speech. His iterations became world-famous, given prominence in being published in The Saturday Evening Post with accompanying essays.

Even today they exemplify the protections of America’s government. The actual paintings were on loan to another museum, so the Museum had hung prints in their own special gallery.  We were especially disappointed by this, as when they are on display, they are accompanied by the Presidential Medal of Freedom he was awarded for his works.

In one gallery, we were able to see Rockwell’s process of creating a painting. Once he had an idea, he would have pictures of his subjects, then sketch a draft of the piece, and sometimes even paint a draft before creating a final piece. It was interesting to see the various steps in such classic pieces as “The Runaway,” The Gossips,” and “A Day in the Life of a Girl.”

Our docent also spoke at length on one of the few political paintings Rockwell did. “New Kids in the Neighborhood” shows two African-American kids moving into a neighborhood, meeting up with three local white children.

The painting details reveal how they are actually similar. The boys are both wearing the same shoes and carrying baseball gloves, one with a catcher’s glove and the other a pitcher’s glove, making for a perfect match. The girls are both wearing pink bows, and each group has an animal. One neighbor peers through their window with an unidentifiable expression on her face, a purposeful feature in which Rockwell challenges the viewers to determine their own meaning. 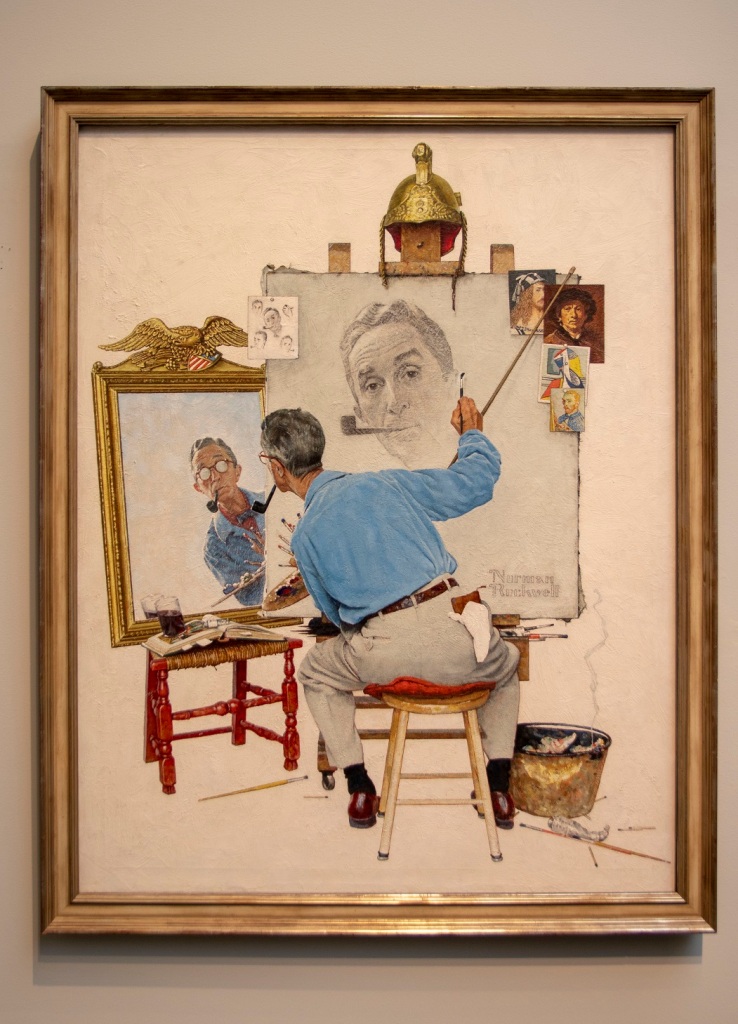 We all enjoyed Rockwell and agreed that he was able to capture so much life and emotion into his paintings. Although we went into the Museum unsure of what to think, we certainly left with a newfound appreciation for the American icon Norman Rockwell, and for his beautiful home-town of Stockbridge, MA.

For dinner, we ventured out but not far from our hotel to a place called Corner Grinder Ranch House, a small deli that serves huge portions.  “Grinder” is the New England name for a submarine sandwich.  We ordered meatball grinders, a mortadella grinder, and a calzone. The grinders were so big, even Sawyer couldn’t finish his! We all left rubbing our full bellies, but also scratching our heads as to why anyone would call a sandwich a “grinder.”