A few times a semester the LEAP Center brings in guest speakers to educate students on opportunities and to share their stories. Having heard Julie Kavanagh speak at a World Affairs Council event, we were honored to have her come to SHSU and speak to a select group of students.

Mrs. Kavanagh is the Diplomat in Residence for Texas for the U.S. Department of State. She has been working for the Foreign Service for more than 29 years and has had the opportunity to travel all around the world having been stationed in countries such as Brazil, Singapore, Columbia, China, and Russia. 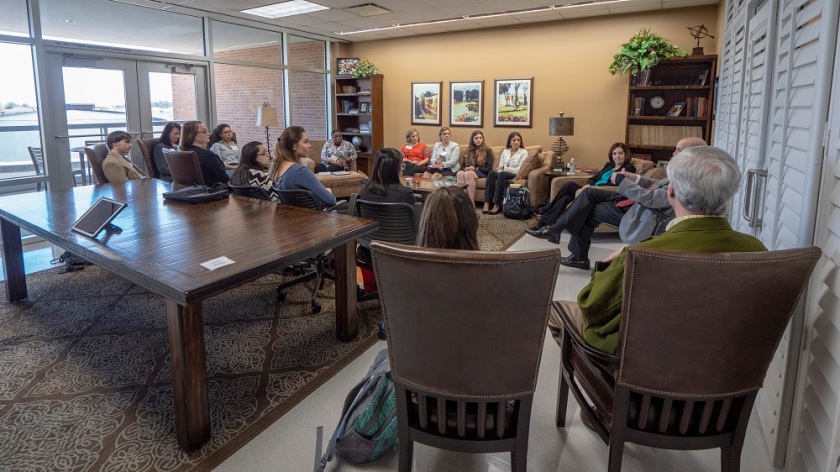 She began by telling us exactly what she does for the Foreign Service, which currently entails recruiting promising individuals. She then walked us through the process one must go through when applying for a position, with the first step being to take the Foreign Service Officer Test.

She then emphasized how important learning a language is in order to work in another country. She is fluent in Mandarin, Spanish, Portuguese and rudimentary Russian, all of which she learned after she was hired in preparation for living in those countries.

Mrs. Kavanagh then shared stories about her time and work experiences while working in these different places around the world. She expressed how she truly felt the Foreign Service makes a difference in the world.

Students asked how she was able to balance her personal life with her work life as she moved from country to country. She explained that she was in a unique situation where her husband was also in the Foreign Service, and they had to make sacrifices and decisions in order to stay in the same countries for the majority of their careers.

As the Q&A began to wrap up, students were able to ask Mrs. Kavanagh questions one-on-one in order to obtain more insight into the life of a successful diplomat.

We enjoyed hosting Mrs. Kavanagh, and we look forward to seeing her in the future.