Thanks to yet another event organized by the esteemed World Affairs Council of Houston, LEAP Students made their way down to the John Cooper School in the Woodlands. While flipping through Sean Spicer’s book The Briefing: Politics, The Press, and the President, we waited with curious excitement for the conversation to begin.  And it began shortly, with WAC Director Maryanne Maldonado introducing the event.

It wasn’t long before Sean Spicer and WAC’s own Ronan O’Malley took the stage. 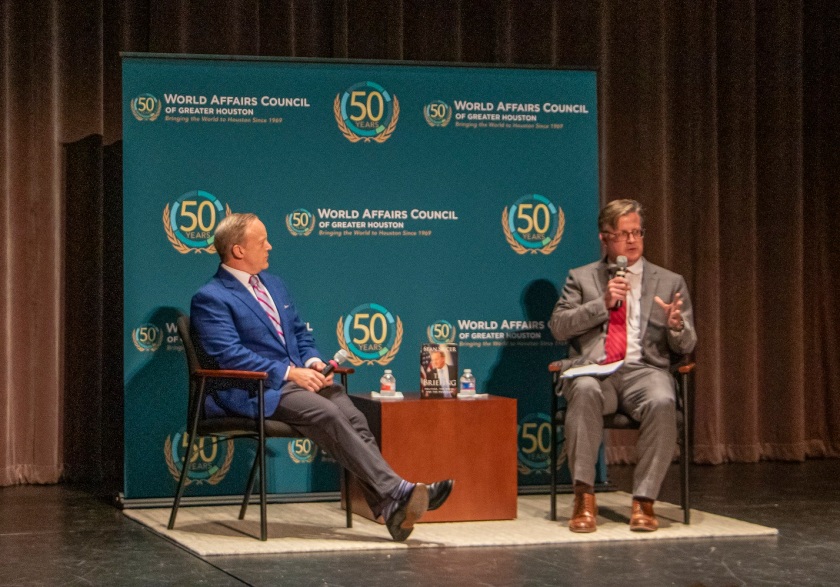 The conversation began with a brief background of Spicer’s career before his tenure in the White House.A commander in the United States Navy Reserve, Spicer described how he came to work for the Republican National Committee, and how he contributed as communications director and chief strategist.

He then offered intriguing insight as to what it was like working with President Trump as the Republican nominee for president in 2016. As the representative of the Republican party, of course, President Trump had the support and resources of the RNC, but Mr. Spicer recalled having a particularly difficult time getting the president to act and speak as he and other RNC officials believed would be best. 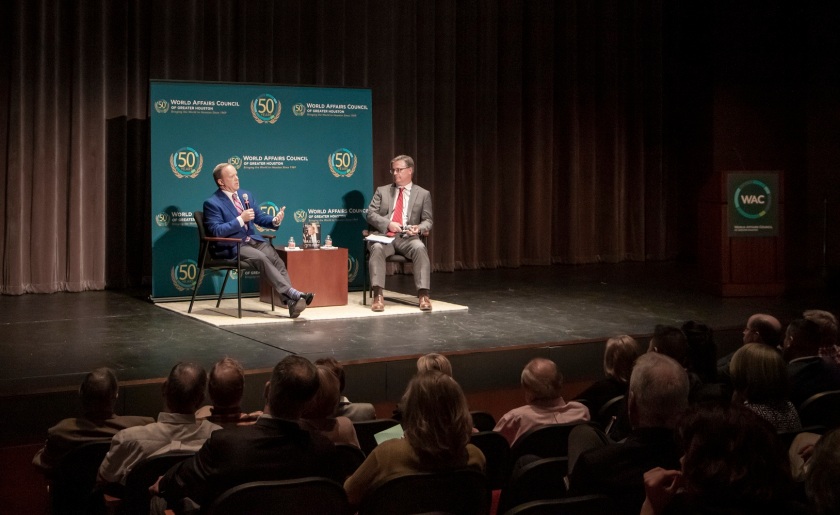 In these instances, however, the president would often find that his way worked better. And so, throughout the election, it was a constant search for balance between what the RNC recommended, and what he actually said and did. Despite this struggle, Mr. Spicer did say that he respected and supported the President’s unfiltered communication with the American people via channels such as Twitter, as it allows for more honest and connected correspondence.

After President Trump won the election, he asked Spicer to serve as his communications director and press secretary. Mr. Spicer recounted some of the challenges of juggling the two positions, especially given the political climate in Washington at the time, and the relationship the press had developed with President Trump’s administration. From explaining that the number of people watching the inauguration was not the same as number of people attending, to putting out rumors that the President had removed a bust of MLK from the Oval Office, Spicer’s relationship with the press was strained from the start.

Mr. Spicer indicated that he made every effort, during his time at the White House, to make the press room as democratic as possible; he mentioned how he would call on people from the back and on the sides, in an effort not to let each briefing be hijacked by one controversial issue presented by those in the front row, but rather to discuss things that other people wanted to know about.

While commenting on the challenges presented by the everchanging beast of the press, he spoke on the recently developing shift from factual stories to opinion pieces. This, along with the twenty-four-hour news cycle which has become more and more prevalent as new communication channels come to exist, presents an unprecedented challenge of constantly having to stay on message, have an answer, and be sure it’s the right answer.

Finally, of course, he spoke on why he left the White House. He said he felt the administration needed a clean break from him, and should have a new face representing the President. Although he was asked to stay, he handed in his resignation. He recalled the experience, saying you never forget the “awesome reality” of its ending. 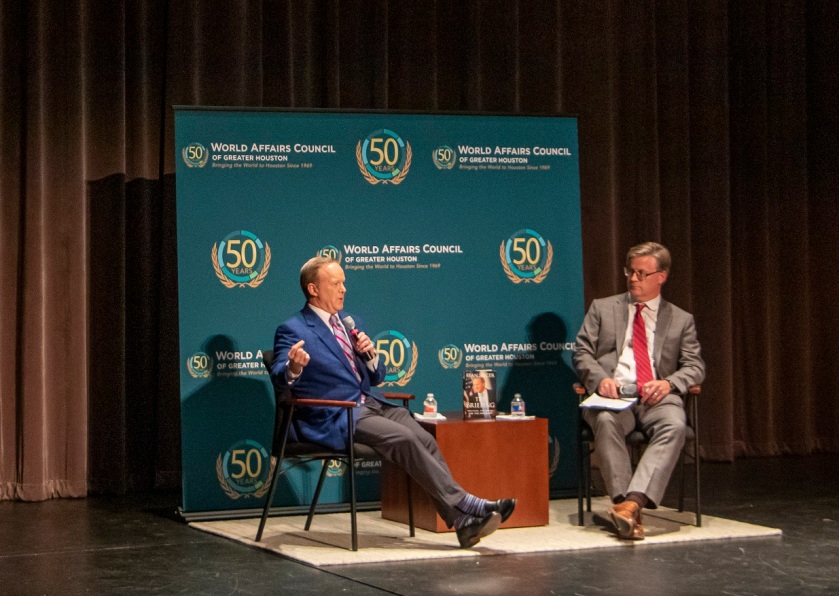 As the conversation opened up to questions from the audience, Mr. O’Malley made it a point to ask one of the LEAP students’ questions.

“What advice would you give younger generations wanting to pursue political communication?”

Mr. Spicer answered by telling us to get involved. Education is important, he explained, but experience is irreplaceable. And finally, learn how to write!

The conversation wrapped up with one final, very touching note from Mr. Spicer. While discussing his latest endeavor as a competitor on Dancing with the Stars, he mentioned that, although his views might be completely different from those of his fellow competitors, he still supports them, and wants to see them succeed. It’s important, he reminded us, to be passionate about the things you care about. But it’s even more important to respect people, even when you disagree with them. Especially when you disagree with them. I think that is one of the biggest takeaways of the evening: People spend so much time attacking each other for who they are, instead of for what their politics and issues are. Mr. Spicer described this as being one of his biggest challenges while employed by the current administration, that people were more concerned about who was in office than of what their policies were. It was an important message, and I for one am glad we got to hear it.

Once the event was over, Mr. Spicer was kind enough to sign all of our books…. 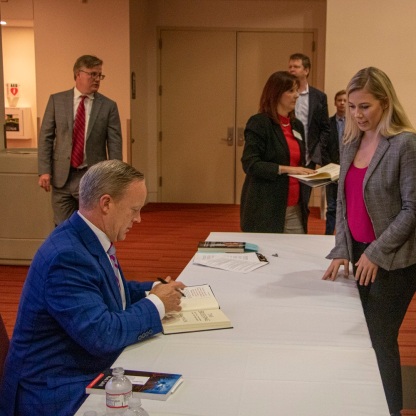 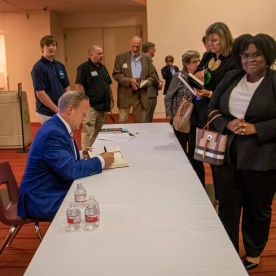 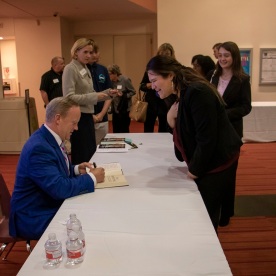 …and take a group photo with us.

Afterwards, we enjoyed a delicious meal at Pallotta’s Italian Grill. 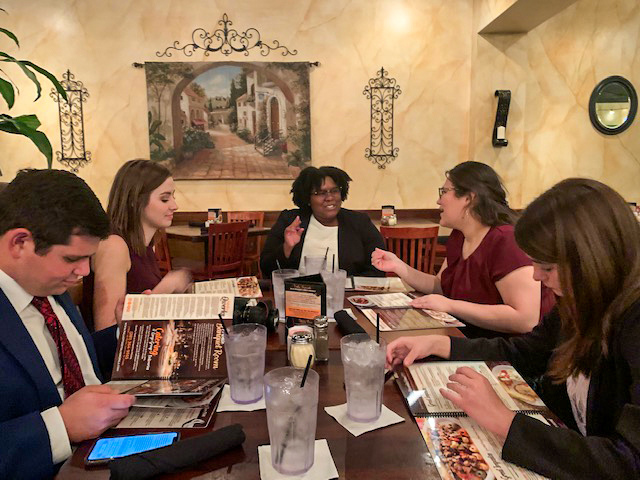 We shared an appetizer of toasted ravioli, fried mozzarella, garlic bread, and “lollipops,” which were meatballs with a piece of uncooked pasta coming out of them. 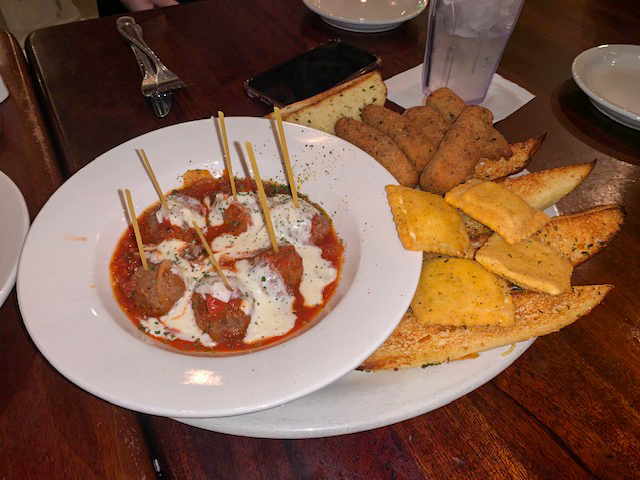 Then we each enjoyed our own entrees, and had plenty left over to take home for breakfast the next day!

Note: The LEAP Ambassadors are a bi-partisan group, and its members seek to learn from members of both parties.  For this event, three Democrats and three Republicans attended.