Linda Pease has contributed to the Huntsville community for almost five decades.  Having moved here in 1972, Ms. Pease spent the next 47 years making Huntsville a better place.  So it was fitting that the community spent months planning for a three-hour ceremony on Thursday, October 24, 2019, giving citizens the opportunity to express their appreciation for Pease’s tireless work. 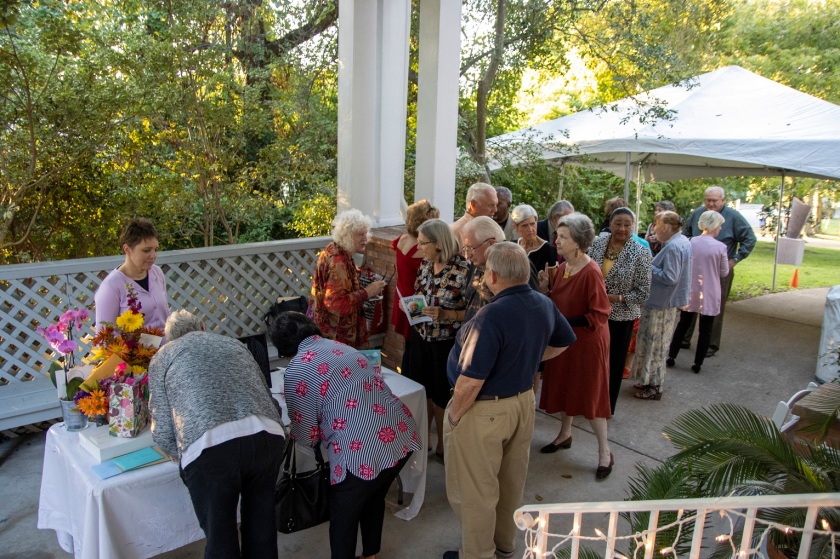 As expected, more than 100 people showed up, and this included, of course, the LEAP Ambassadors, all of whom have been touched by Pease in numerous ways.  Indeed, several LEAP alumni showed up from out of town, while others from Washington state (Constance Gabel) to Washington, DC (Justin Veillon), sent cards or gifts.

The event was organized by the Friends of the Wynne, with Nancy Gaertner leading the way. 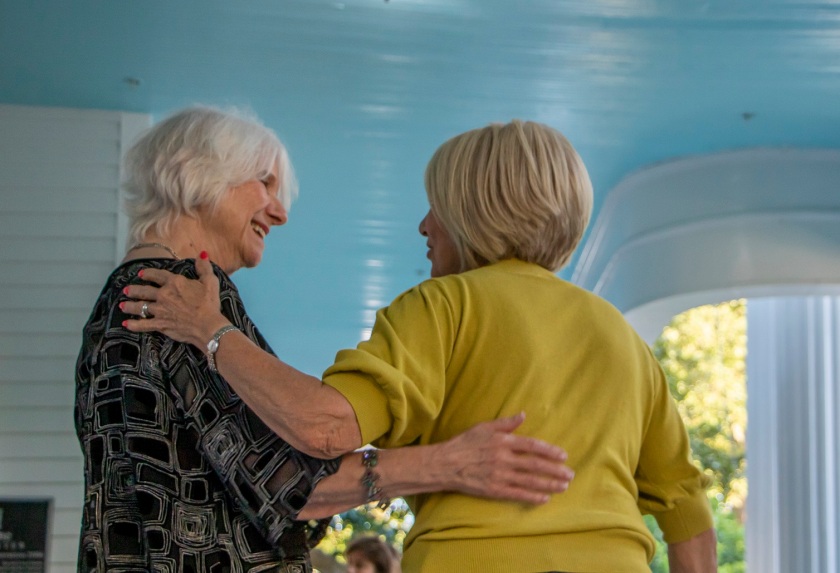 The house and grounds were decorated… 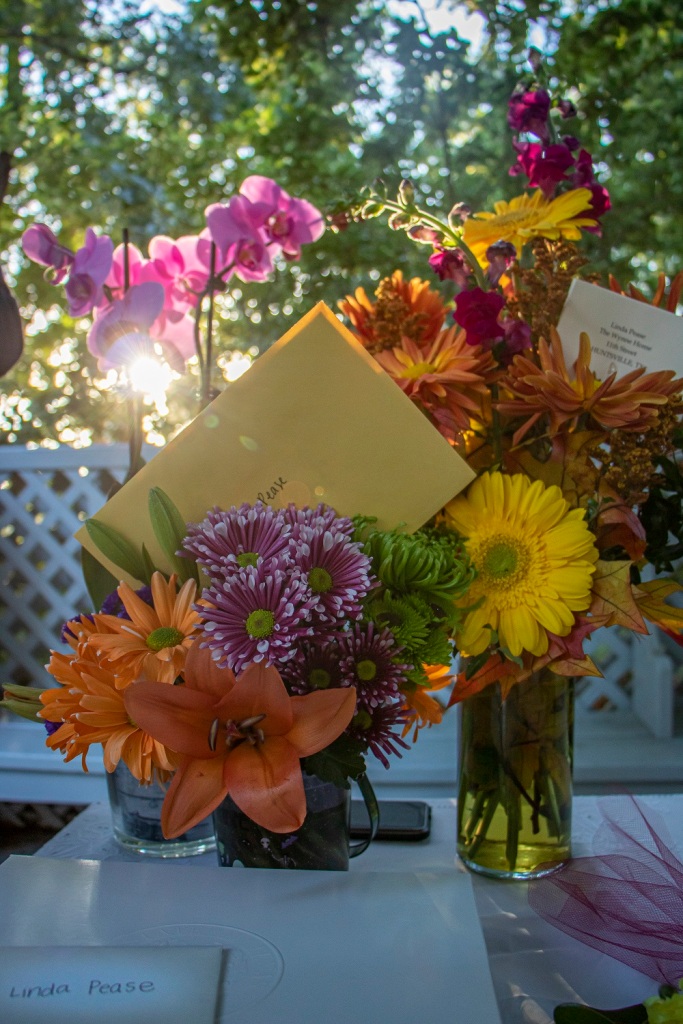 …and SHSU provided a quartet… 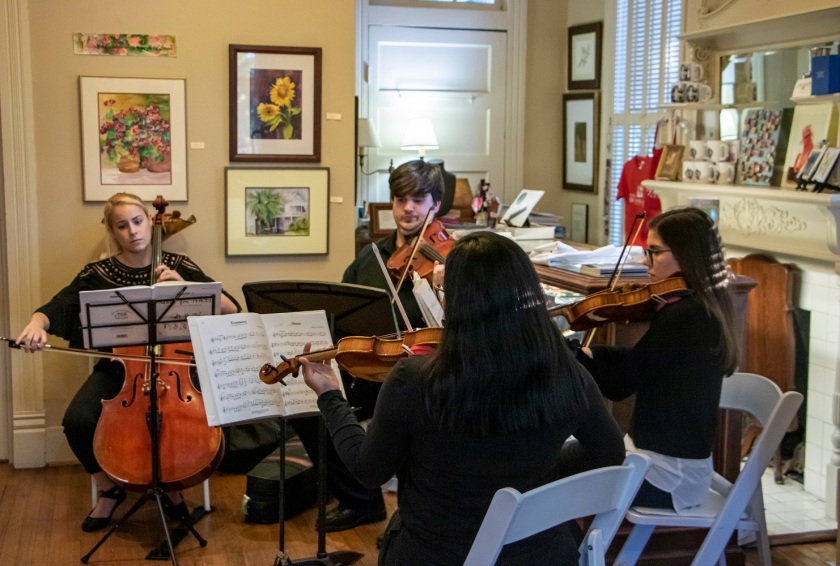 The most important part of the evening, however, was for guests to spend time with Linda Pease, and to say, “thank you.” 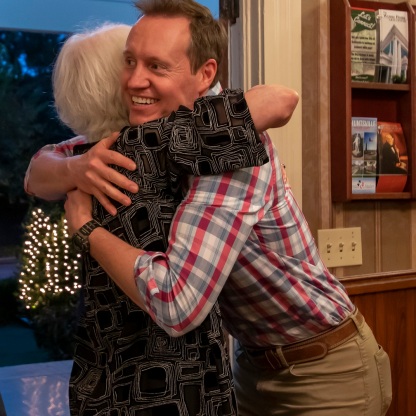 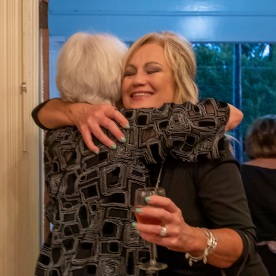 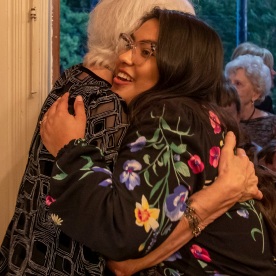 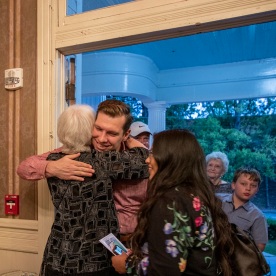 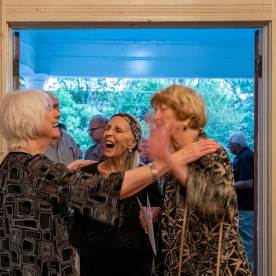 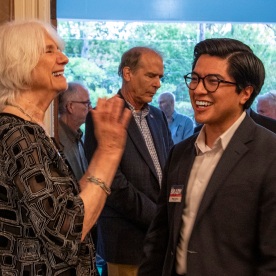 Pease worked for the City for 44 years, working in the Library, heading the LEAP program, and serving as the Cultural Arts Coordinator.  Many of the City’s public sculptures are a result of Pease’s work; she helped establish the Main Street Program in Huntsville; she was almost solely responsible for the City’s “Cultural District;” she facilitated the transfer of the “Wynne Home” from the Wynne family to the City’s possession; and she was responsible for commissioning world-famous Richard Haas to do some 15 murals in the community.  Indeed, Huntsville beats out New York City, Philadelphia, Boston, St. Louis, and Oakwood, IL, as having the most exterior Haas murals in the world.  This is quite an accomplishment, given that the New York Times called Haas the “greatest architectural muralist of our time.”

In light of these achievements, it’s no surprise that she was given the SHSU Art Department’s Award “Supporter of the Arts” in 2014.  Department Chair Michael Henderson announced the award, saying, “If we gave this award to Linda for the next three years, we wouldn’t fully capture all she has done for the arts in our community.”

Equally unsurprising, Ms. Pease was recognized as Citizen of the Year in 2018.

And, with Nancy Gaertner continuing her lead….

…many additional honors were bestowed on this night.

City Manager Aron Kulhavy announced that the Wynne Home porch would henceforth be the “Linda and Ralph Pease Porch.”

Roberta Plant presented Linda an art piece from Charles Pebworth (a close friend of Pease’s, before his passing earlier this year), a gift from Betty Moody…

…presented Linda with a flag flown over the Texas Capitol building, a gift from former Wynne Home Intern Lexi Gonzalez, who now works as Chief of Staff for State Rep. Hubert Vo. 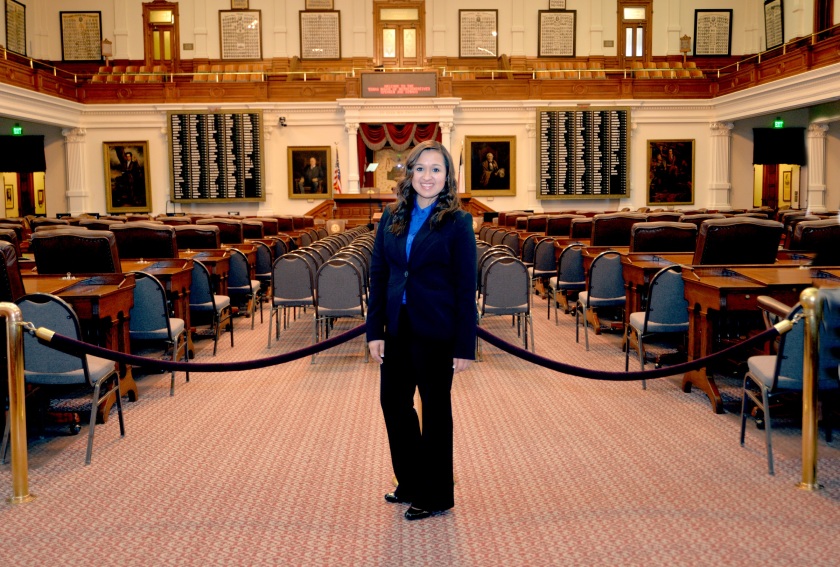 Brian Aldaco, another former Wynne Home intern, presented Ms. Pease with a flag flown over the US Capitol building, an honor by Congressman Kevin Brady (for whom Aldaco now works).

And, of course, many more friends were on hand to enjoy the occasion.

Nicolay Dance Works also put on a performance (“Arabian Dance”) on the front porch–now the Linda and Ralph Pease porch!

It was, as expected, a wonderful evening in honor of a remarkable woman.

On Saturday, September 22, the LEAP Ambassadors volunteered their time and assisted the Friends of the Wynne at the opening reception for Lee Jamison’s FM 405 exhibit at The Wynne Home. We arrived to begin helping with food preparation; setting plates and glasses out. The food consisted of hors d’oeurves, and various sweet bites, all purchased and prepared by the Friends of the Wynne. 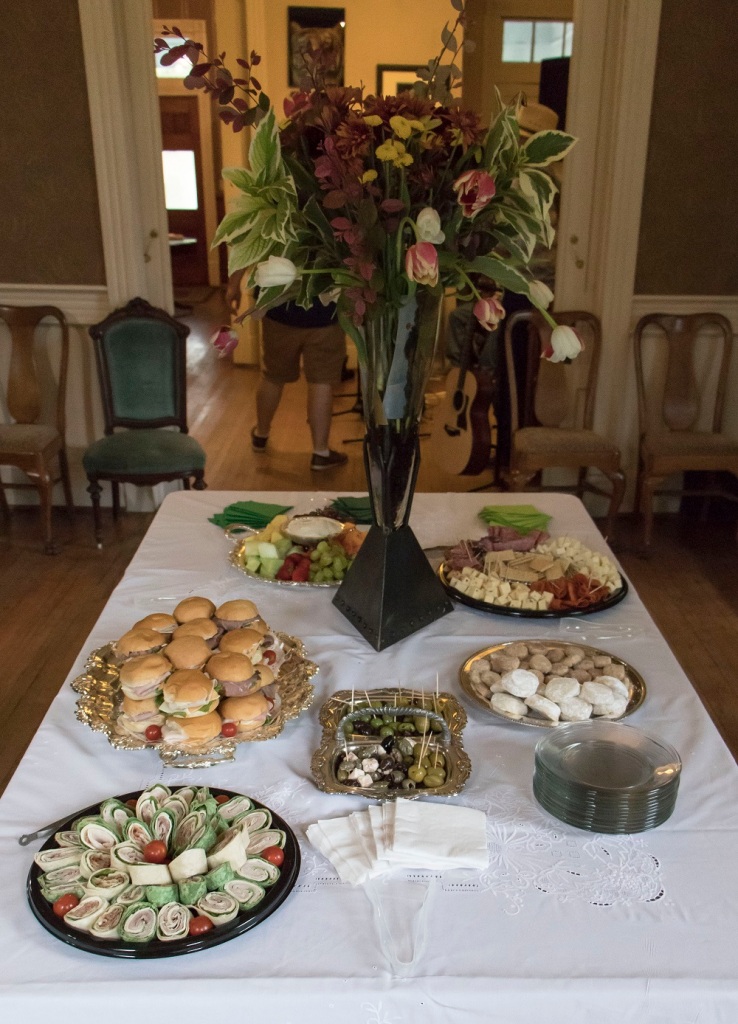 There were several different types of cheese and crackers available, along with some dried fruits and nuts, small sandwiches, and cookies and fresh fruits.

Some of us Ambassadors greeted guests while others of us helped restock food and drinks. 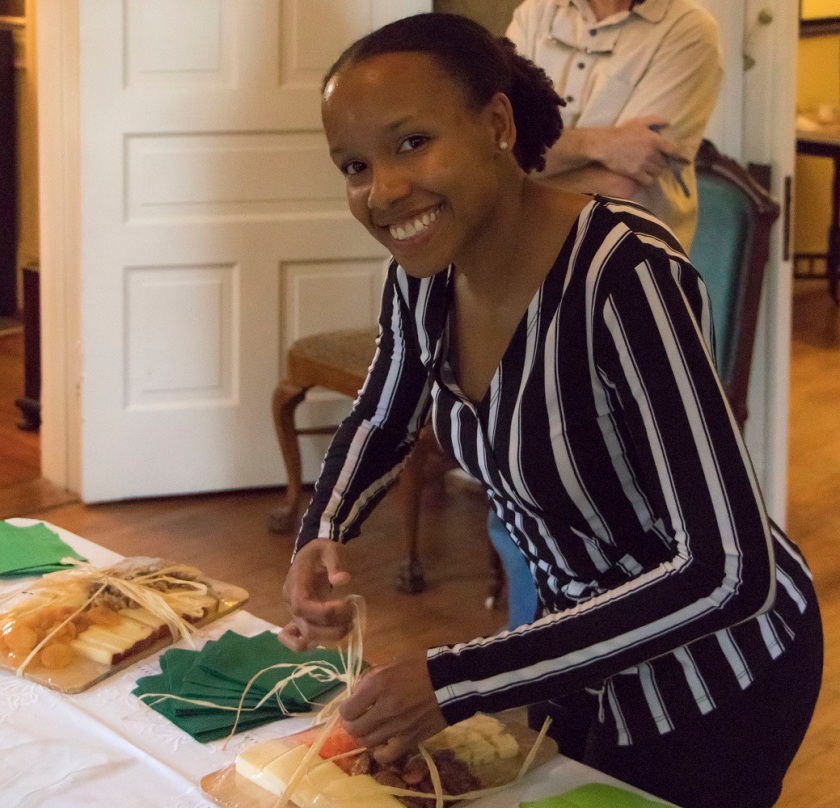 There was excellent live music in the small gallery courtesy of the Tom Weger Band, who did a great job of matching the dirt road country theme of the evening. 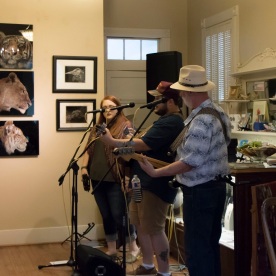 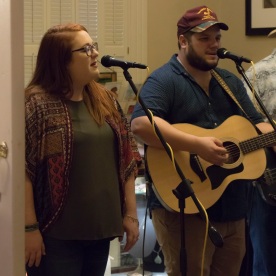 …with additional comments by Mayor Brauninger.  Jamison said that the main idea behind the exhibit was to draw attention to the underrepresented East Texas landscape in Texas art. 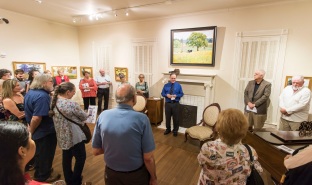 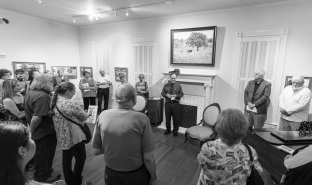 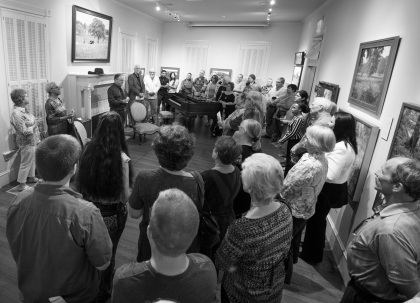 Mr. Jamison does an excellent job of doing just that, as many of the paintings are of scenes and objects that you would see if you looked out the window during a drive through nearly any East Texas town. 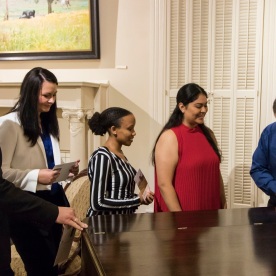 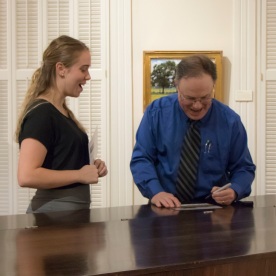 But Jamison mingled and discussed art with the entire crowd…

…with many admirers of Mr. Jamison lingering to discuss art, East Texas, or a particular painting.  It was an evening well spent at the Wynne Home, with friends from around the community.

One of our favorite annual events is the Easter Egg Hunt at the Wynne Home Arts Center.  It involves games, face-painting, and a picnic lunch of hot dogs, which are a whole lot of fun for local families.

This year, more than 200 people came out to the Wynne Home, a number that proved a bit overwhelming to us, especially when they arrived early. Planned by LEAP Ambassador and Wynne Home Intern Beatriz Martinez, we had Musical Chairs… 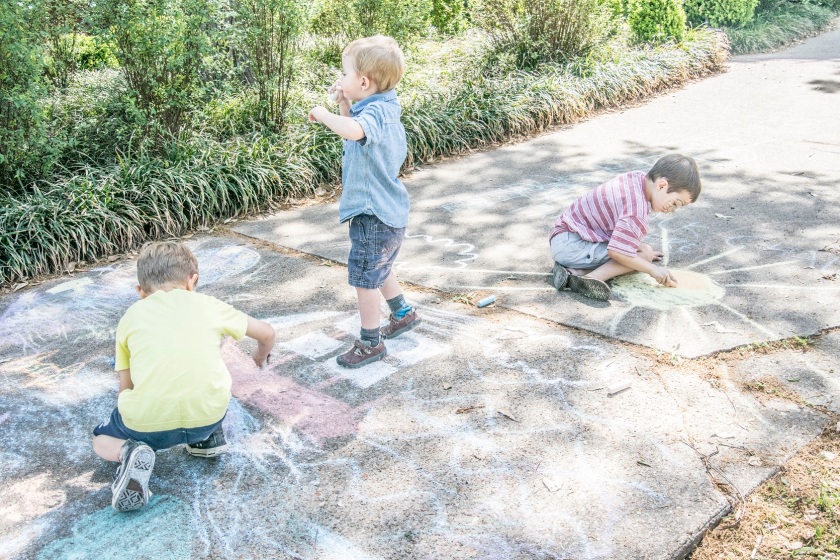 …and coloring.  We had a great group of Friends of the Wynne on hand, including Patti Davis, Mary McCarley, Wes Boyd, Susan Sanders, Maureen McIntyre, and Buddy Aber. Political Science major Sadie McLaughlin was also nice enough to stop by and help, doing at least five separate tasks over the course of the event!

As much as there was to do, the kids wanted more.  Accordingly, we incorporated photos with the Easter Bunny… 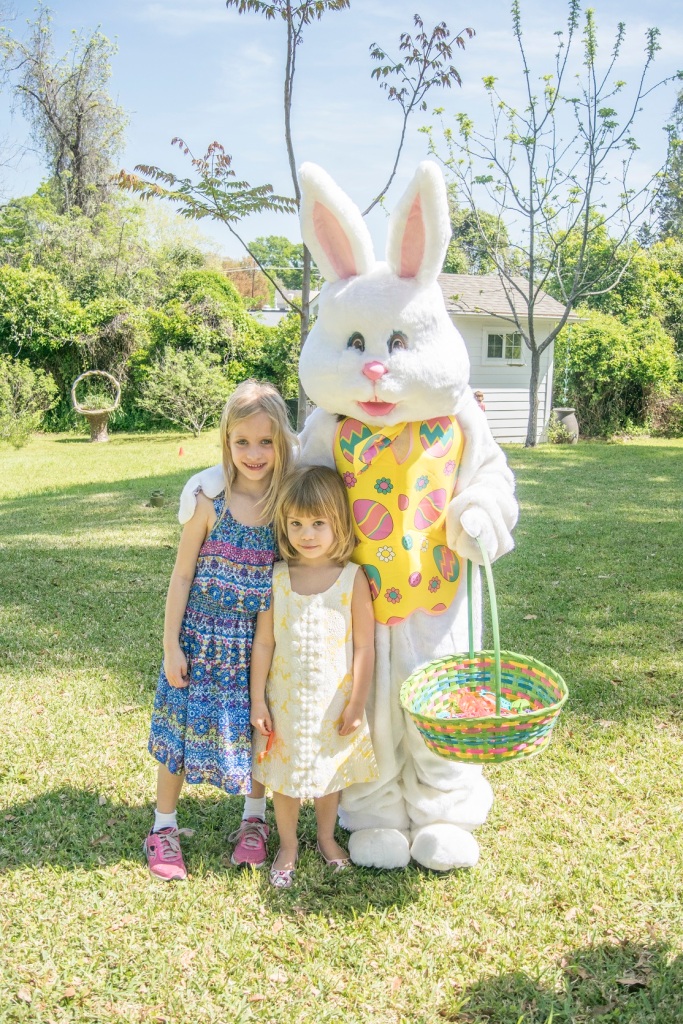 …and numerous activities with Sammy Bearkat…

…who occasionally stole the spotlight from the Easter Bunny, even on Easter… 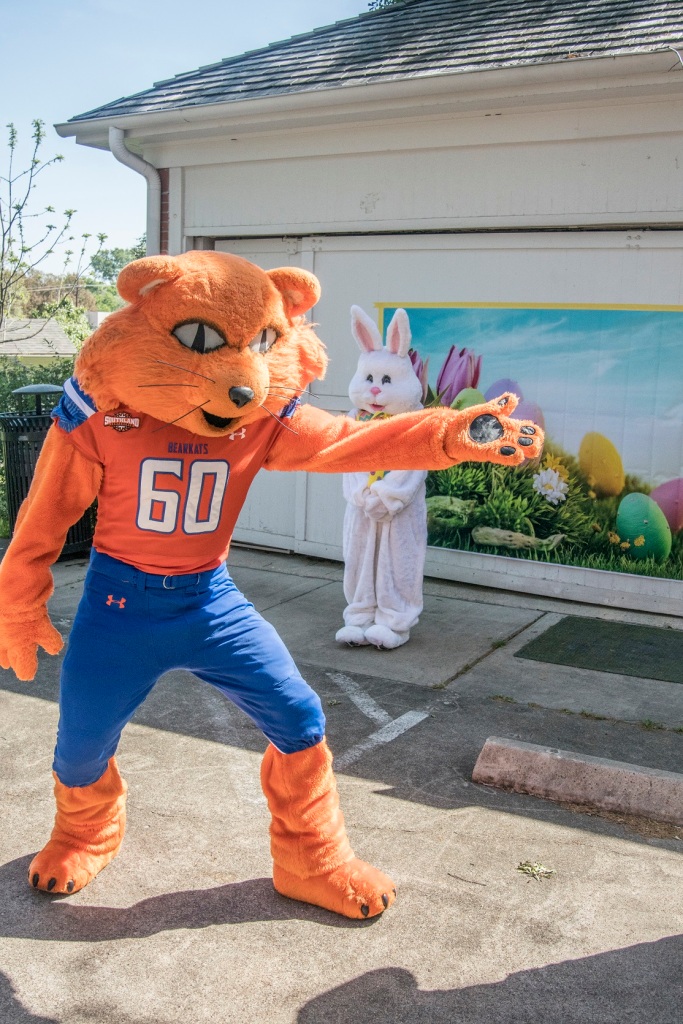 As exciting as those activities were, the kids came to the Wynne Home to hunt for eggs, and they let that be known!

At noon, we kicked off the Easter Egg hunt–more than 1,000 eggs, strewn about the Wynne Home Arts Center.  You may have heard stories about shoppers getting into fights on black Friday, the day after Thanksgiving.  Those folks have nothing on kids at the beginning of an Easter Egg Hunt.

The hunt lasted approximately 9 minutes, with the kids finding them quickly.

Thankfully, no kids were actually trampled on by other kids in the dash for eggs, but it was a close call. 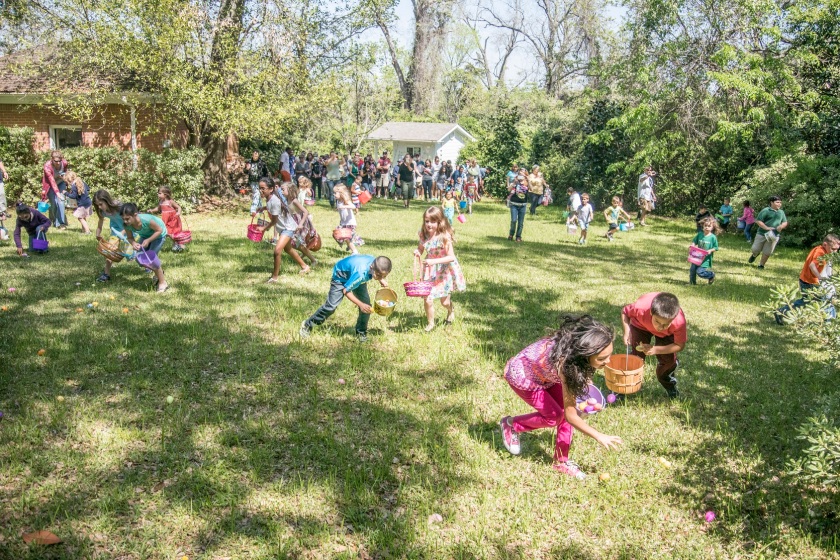 The kids and their parents then moved to the grill, where some 150 hot dogs were available.  It was good to see some of the folks there from last year and from some of the other activities we do over the course of the year.

At the end of the event, 3 hot dogs and one bottle of water were left (the sodas and Capri Suns were gone).

And the kids were tired….

…as were the volunteers.

But there were a few sweet kids left, still looking for eggs, armed with the optimism of the young, and the knowledge that more eggs await tomorrow.